Railway Union kicked off the defence of their league title with a 10 - 60 win away to league newcomers Suttonians.
2019-20

By Editor on March 30, 2020 0 Comments
Railway Union kicked off the defence of their league title with a 10 - 60 win away to league newcomers Suttonians.
CLUB WOMEN ADVERTS
JOIN US

The remote rugby results are in for the Women’s Virtual AIL Week 13 and between the refix matches and the full set of fixtures we received 1,164 votes.

Our friends at Cooke were the big winners, receiving the most individual votes with 147 votes for a win against Malone, and they were joined by UL Bohemian, Railway Union and Galwegians in getting a try bonus point with over 100 votes cast for each team.

Converting the votes to match scores leaves Suttonians as the only side to pick up a losing bonus, the converted results are shown below.

HOW WE WORKED OUT THE SCORES

The votes received for the Week 13 fixtures were as follows.

Multiplying the votes cast by 0.2257 gives the match scores as shown.

In terms of jeopardy, it doesn’t leave us much to play for as we go into what would have been the final week of the regular season. Cooke’s mobilisation for the refix matches denied Suttonians the chance of breaking into the top four with the virtual standings reading as follows. 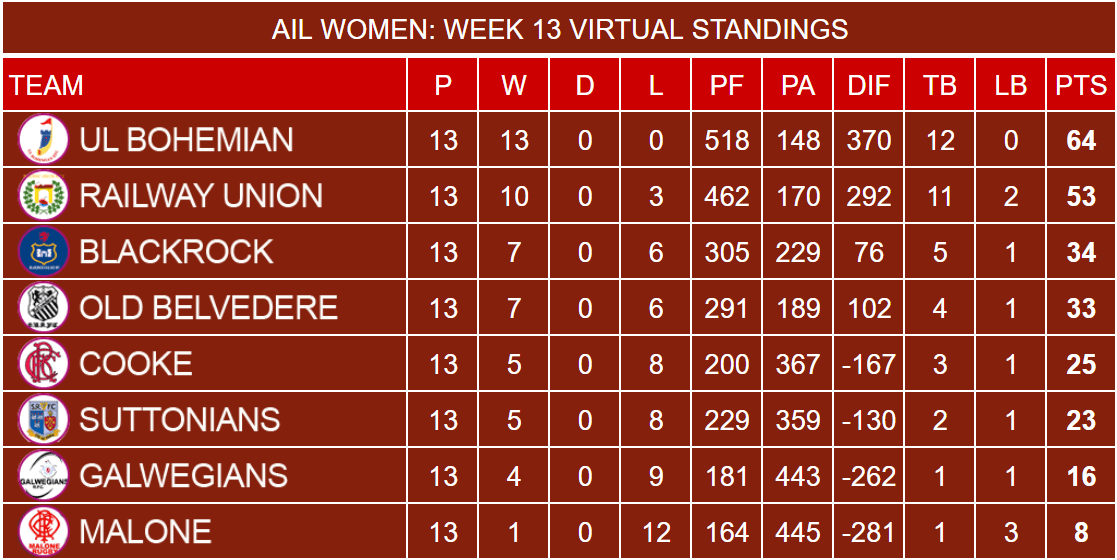 Though the top four has now been decided with one round of fixtures to go there is still a bit to vote for. Blackrock College and Old Belvedere are still battling it out for a third place finish to avoid undefeated UL Bohemian in the play off semi finals.

Cooke and Suttonians are also still in the hunt for that fifth place finish to determine who is the best of the rest at the end of the season.

Under normal circumstances we would have been covering Railway Union and Suttonians Women’s Record Crowd attempt at Park Avenue, and the Cooke v Belvo game at Shaw’s Bridge, this coming weekend but that’s not going to happen.

Instead let’s see if we can get a record number of votes for the virtual matches this weekend to show the support for the women’s game in Ireland.

We’ll have the voting options for Week 14 up on the morning of Thursday 2nd April.