Ballymena Academy ran out deserved winners in the 2010  Northern Bank Schools Cup Final at a packed Ravenhill on Wednesday afternoon by the score 10 – 7.
Schools

By Editor on March 31, 2020 0 Comments
Ballymena Academy ran out deserved winners in the 2010  Northern Bank Schools Cup Final at a packed Ravenhill on Wednesday afternoon by the score 10 – 7.
SCHOOLS RUGBY ADVERTS
JOIN US

We’ll be looking back of some of our favourite matches and competitions that we covered over the last ten years and we’re kicking it off with a look at our favourite Schools Cup Campaign.

This season’s campaign was setting itself up as one of the best and we’ll be reviewing it later in the week, however my personal favourite was the first one I covered in full and that was Ballymena Academy’s win in 2010. .

Every round of that 2010 campaign seemed to throw up hugely competitive games, with no shortage of drama, and there was an absolute plethora of fantastic players across all the sides.

Unfortunately, due to a catastrophic hard disk failure back in 2012, I  lost the bulk of the original photos from these games but I had other, lower quality, images backed up in various places so they have been reworked and brought back on to the site and linked to the original reports.

Click on the links in the article below and they will take you to the original match report complete with the re-worked galleries.

Like all good Schools Cup campaigns I kicked off our coverage of the Northern Bank Schools Cup, as it was then, with the second round match at Larne Grammar who hosted Strabane Grammar on a bright and breezy Saturday morning in January.

Strabane Grammar had fought their way through the opening round robin competition, beating Antrim Grammar and Wellington College, and with these two wins behind them they travelled to Larne with a degree of confidence.

Unfortunately for the North West side they came up against a slick and physical Larne side who ran in five tries in their 29 – 3 victory. 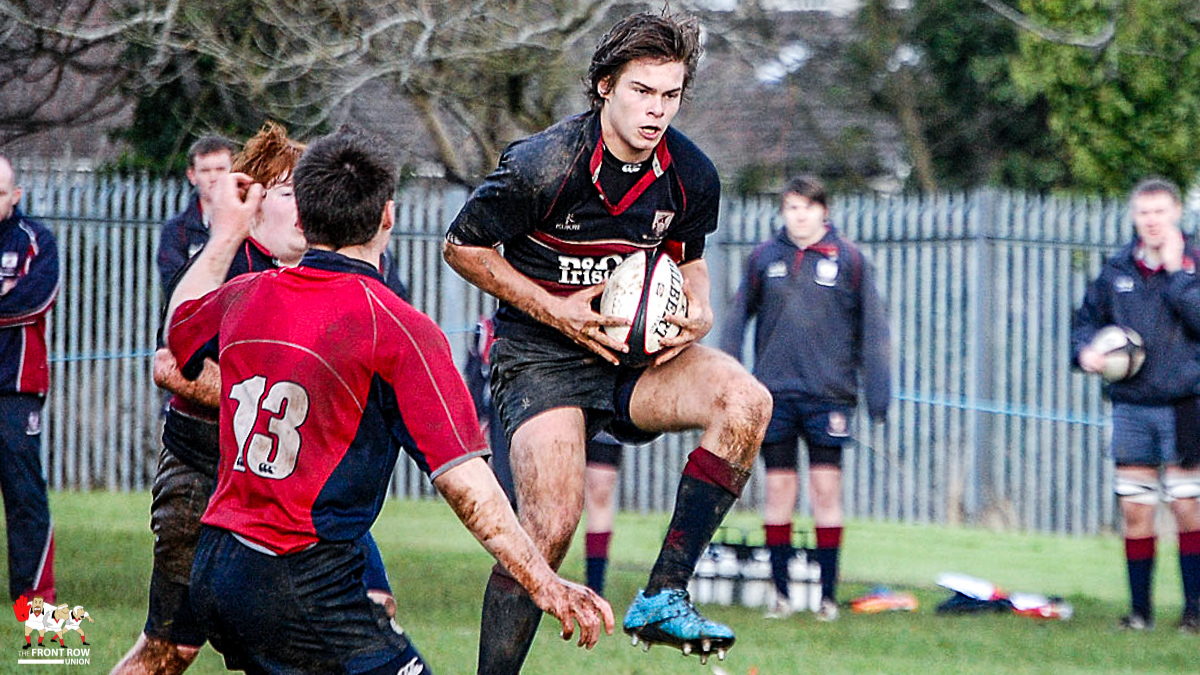 Tom Saunderson retrieves a chip ahead on his way to the line for Larne Grammar.

Our Man of the Match was Tom Saunderson who bagged a brace with Larne’s other scores coming from wingers Blair and Mitchell and young Ryan McAllister, the Larne RFC legend serving up a try scoring cameo at the end. Saunderson’s efforts put him just ahead of Stuart McIlwaine who went on the represent Ulster U20’s later that year.

With good strength in depth across the team, Larne looked well set for a bit of a cup run that year. Unfortunately, they were drawn against an excellent Friends’ School Lisburn in the next round.

It was the first of four epic battles for a Dave McGuigan inspired Friends’ School and they edged this one 17 – 0 with McGuigan grabbing the second score after Andrew Vance scored the first. Dave McGuigan went on to be our Schools Player of the Year and when you read the list of players that popped up throughout this campaign it has to be said that 2010 certainly was the year to win that one! 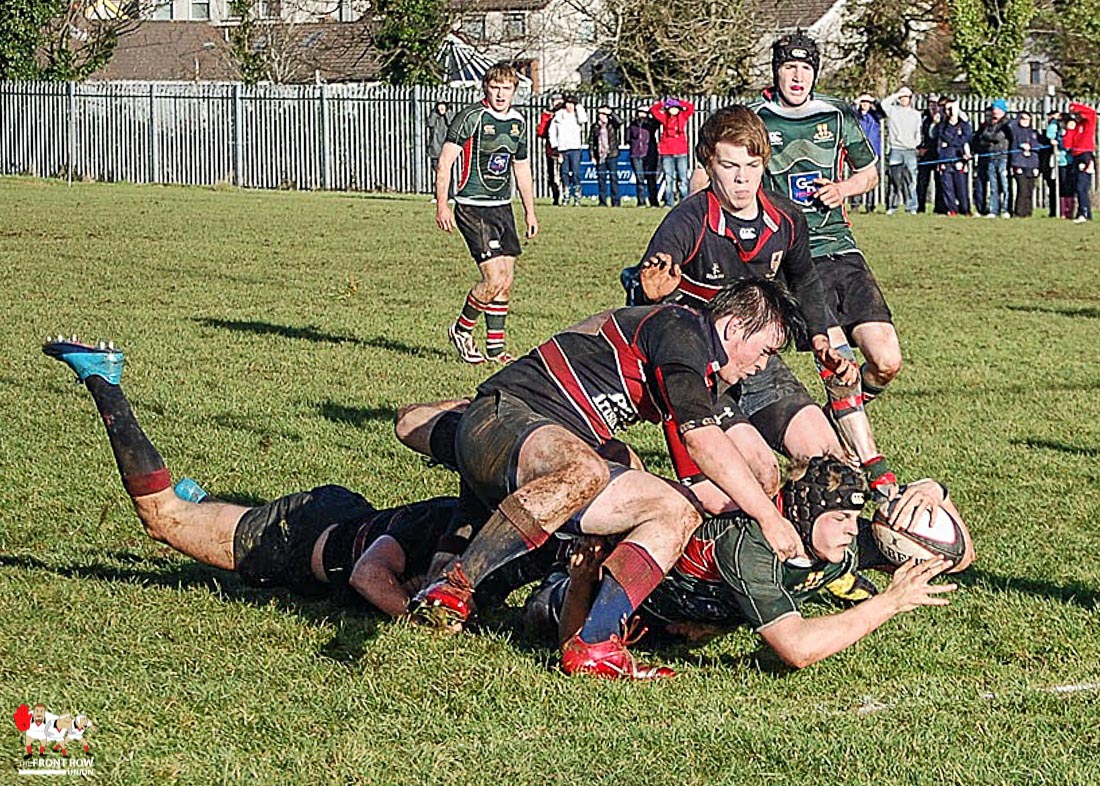 Dave McGuigan stretches for the line for Friend’s second try against Larne.

Special mention to McIlwaine of Larne and Vance of Friends who also had outstanding games.

Friends’ moved forward to the fourth round where they were awarded a home fixture against Sullivan Upper in early February and it was the start of five games that had me going holy f#@k up to the final whistle on March 17th.

This history of the schools cup could have been so different as Sullivan Upper raced to a 3 – 15 lead in Lisburn, after tries from centre Ryan McCandless and No. 6 Michael Scott with outhalf Jamie Carr adding a penalty and conversion.

Ollie Lockhead was having a stormer in the lose for Sullivan but Friends’ gradually worked their way back into the game as McGuigan began to dominate the lineouts and centre Andrew Vance broke through to reduce the arrears as the game went into its final quarter. Craig Lewsley added the conversion to take the score to 10 – 15. 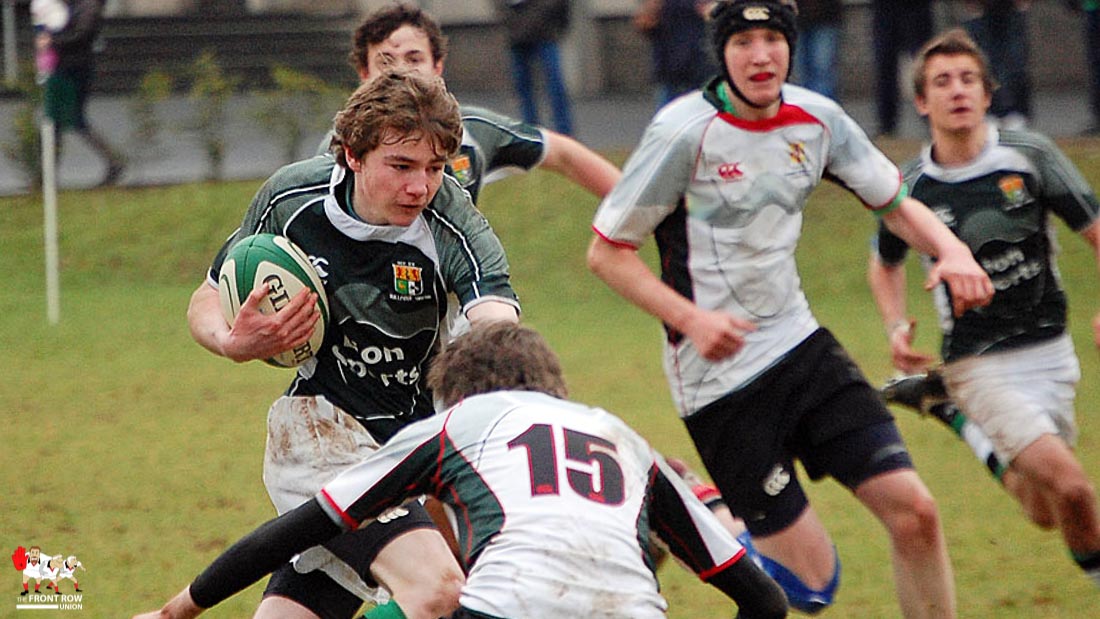 Sullivan dominated the bulk of the game against Friends’

Michael Cochrane crashed over to tie the game, with minutes remaining, and Lewsey added the conversion to give Friends a two point lead. Sullivan camped in the Friends’ 22 for the final minutes but they were unable to break through, the two point win seeing Friends progress to the quarter finals and two epic battles against Ballymena Academy.

The first meeting with Ballymena Academy ended as an 11 – all draw at Eaton Park but it was a game that Friends should have won. Leading 11 – 3 going into the last quarter Friends looked the likely winners but a controversial yellow carding of Friends talismanic No. 8 McGuigan allowed Ballymena to snatch a late draw.

A tense first half ended with the teams at 3 – all after Ballymena’s Callum Patterson cancelled out an earlier penalty from Craig Lewsey.

A late yellow card for McGuigan gave Ballymena the opportunity to snatch a late win but they had to settle for the draw after Patterson’s conversion attempt from a try by Peter McKerr bounced back off the underside of the crossbar.

The replay took place the following Saturday at Friends’ School with the home side favourites to get the result on their own turf but it wasn’t to be.

Leading 10 – 6 with time running out Friends were denied a trip to Ravenhill with a dramatic try from Ballymena’s No 8 John Andrew in the final play of the match. Patterson missed the conversion from out wide but the kick was academic as the referee blew for the end of the match. 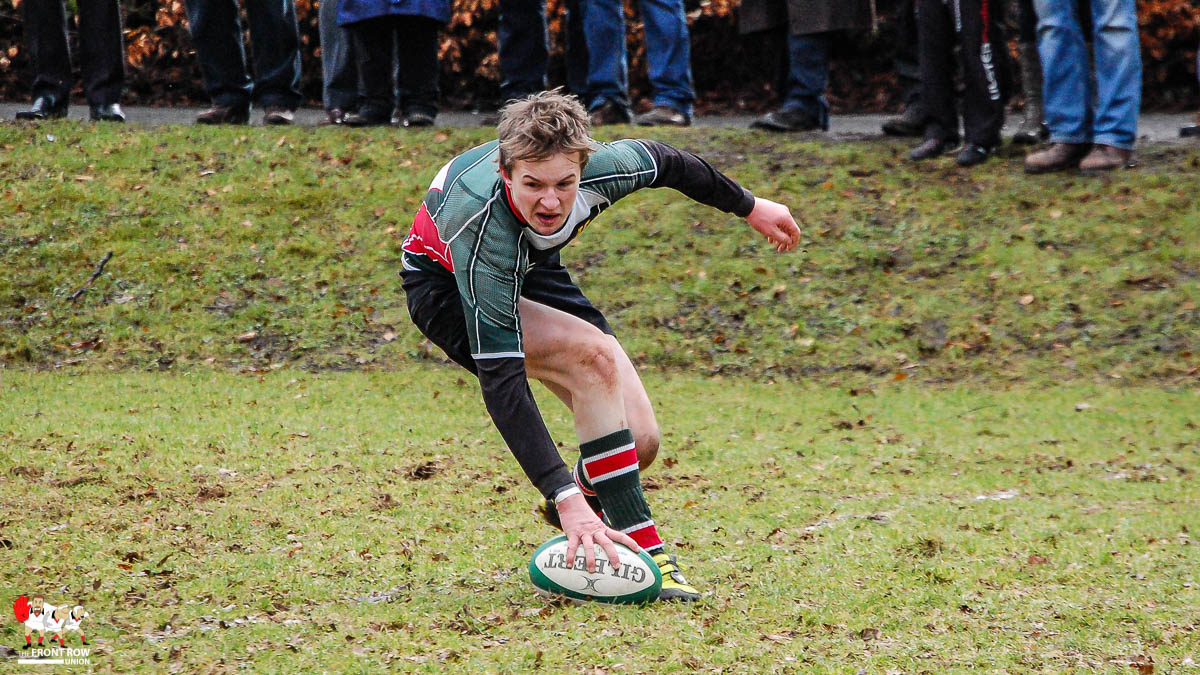 Paddy Pringle looks to have sent Friends’ through to the Schools Cup semi final after scoring against Ballymena.

Again, Friends will be wondering how they lost this one, after battling to a 10 – 6 lead when Paddy Pringle dotted down in the corner following a powerful run from McGuigan. Lewsley added the conversion and when Ballymena’s influential full back Charlie Simpson was yellow carded for an extraordinary attack on Eastwood it looked like it would only be a matter of time before Friends would score again. 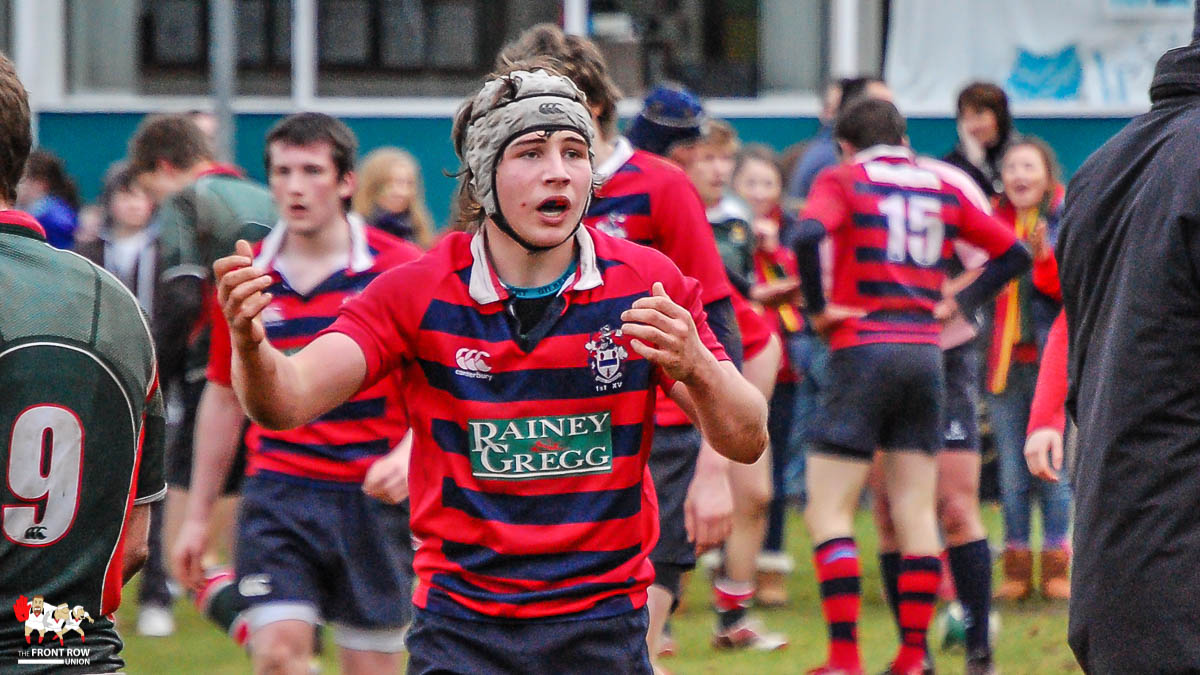 John Andrew “in shock” after claiming the last minute winner for Ballymena Academy.

Fate and John Andrew had other ideas and Ballymena showed extraordinary composure to regroup. With the last play of the game, out half Patterson cut back to the outside to wrong foot the Lisburn defence and, though he was brought down yards from the line, his pass found Andrew in space and the No 8 went over for the match winning score to give the visitors the match by 10 – 11.  WOW!

Having followed Friends for four games it was hard not to have got invested but this wonderful Ballymena side quickly got me on their side as they swiped the game from the hands of the star studded pre tournament favourites Methodist College, led by Paddy Jackson.

The game was a battle of the out halfs with Patterson giving his side a six point lead with two early penalties. However Jackson struck with a try and conversion before half time to give Methody a one point lead going into the break.

Jackson slotted over another penalty at the start of the second half to move the score to 6 – 10 and it looked as though that would be enough as the clock ticked down towards full time. 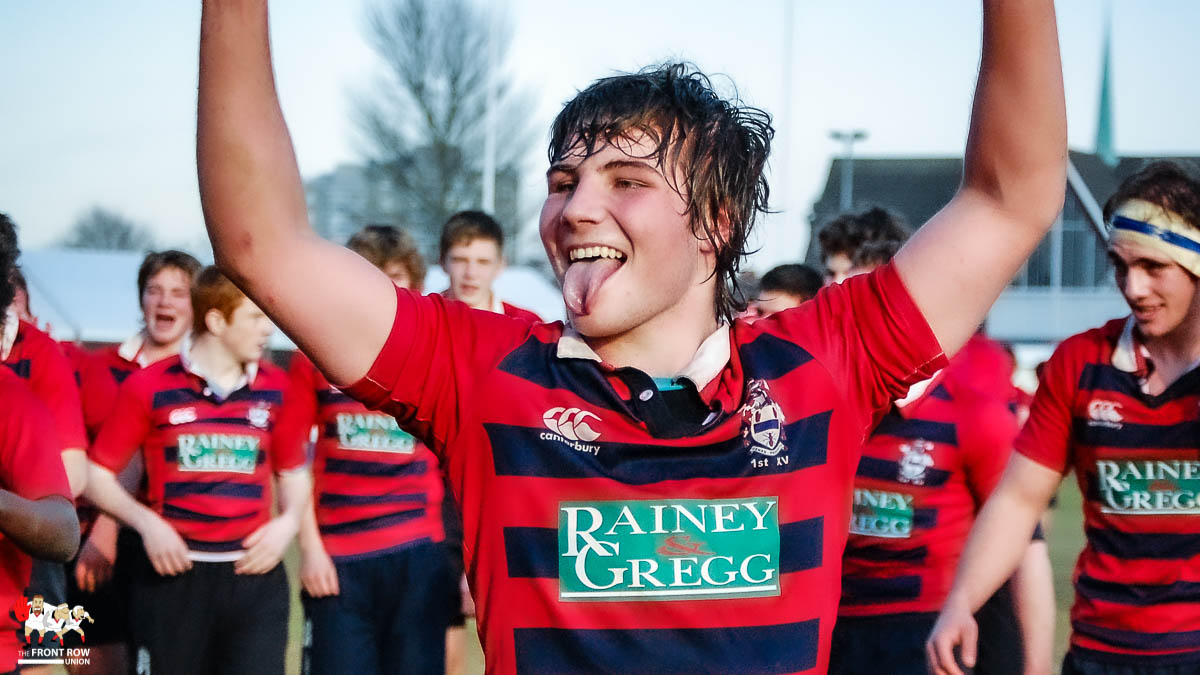 Not so shocked in this one. John Andrews celebrates his last minute winner against Methodist College.

However, up popped that man again as, after a series of drives from close in, John Andrew forced his way over for the winning try. Patterson missed the conversion, but by that point the celebrations had already started.

Despite knocking out the favourites Ballymena still went into the final as underdogs against a Belfast Royal Academy side featuring Iain Henderson, Stuart Olding, Conor Spence, and David Cartmill.

However, Ballymena Academy ran out deserved winners in the 2010  Northern Bank Schools Cup Final at a packed Ravenhill on Wednesday afternoon by the score 10 – 7.

BRA opened the scoring with a try by Jordan Buchanan, converted by David Cartmill but Ballymena hit back late in the first half with a Caleb Morrison try, converted by Callum Patterson, and went ahead early in the second half with Patterson adding a drop goal.

The Belfast side tried hard to respond and with captain Conor Spence prominent they managed to pin Ballymena in their own half for much of the remainder  of the second period but too many of their moves broke down under pressure.

Ballymena were now reduced to a few breakouts and Charlie Simpson came close late on but it was BRA who applied the closing pressure as Ballymena fought to defend their slender lead.

The final whistle eventually came and it was ‘fluffy sheep’ supporters who were cheering at the end. 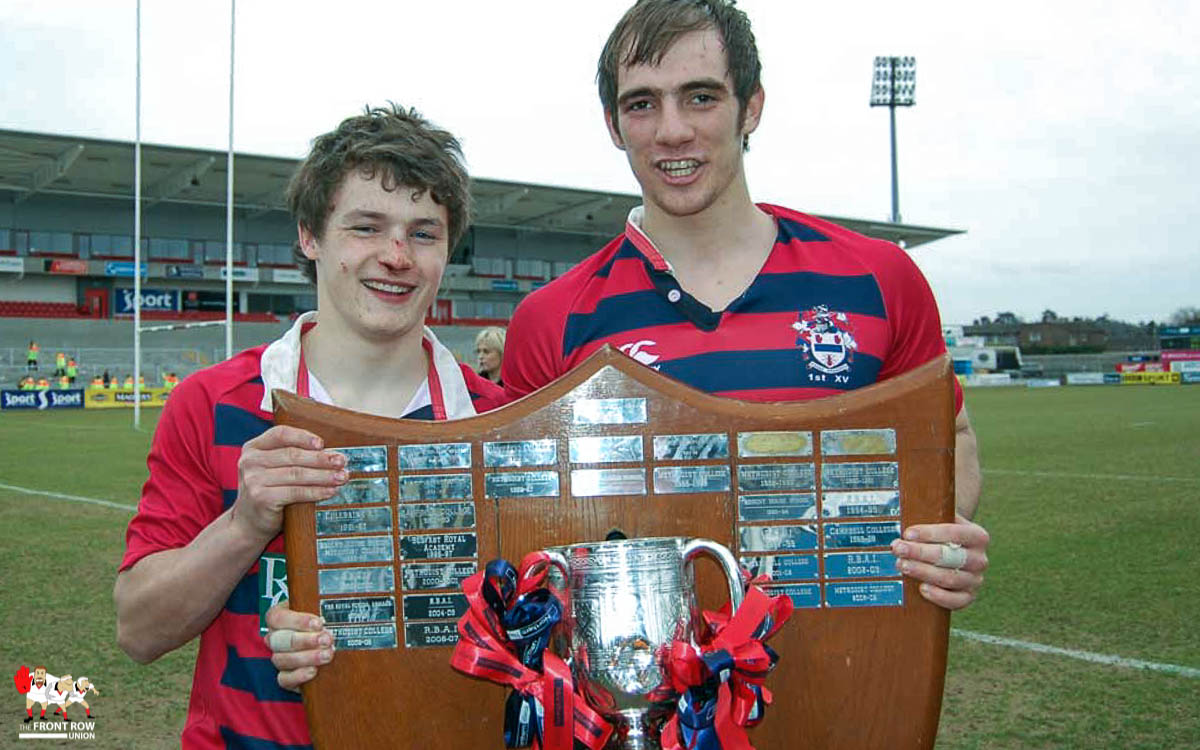 We have some excellent headshots that Ballymena Academy sent to us ahead of the final – I’m sure the lads will appreciate us digging these ones out for posterity.

Apologies to any player we may have omitted during this run.