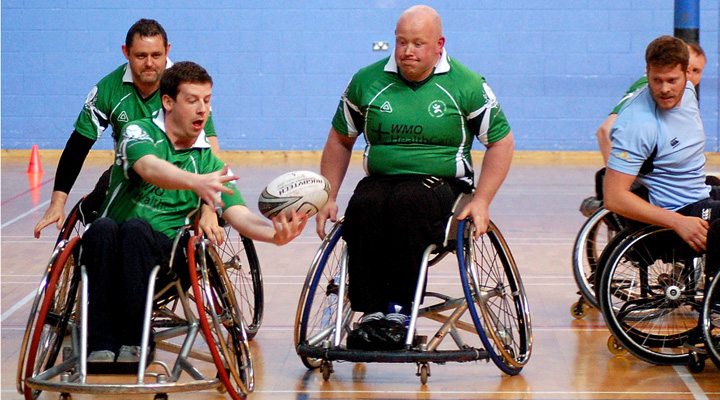 On my way back from Limerick on Sunday afternoon I had the opportunity for a pit stop in Clontarf to view the Irish Wheelchair Rugby 7’s Challenge matches and I must say it was well worth it.

The competition was already in full swing when I arrived at 3:00pm with teams from Tallaght, Barnhall and Swords competing against invitational sides Mick’s Messers and Noby RFC in a round robin competition.

Wheelchair 7’s rugby is as near a recreation of Rugby Union 7’s as is possible, with the obvious limitation of a wheelchair, and is open to all disabilities as well as able bodied players.

The games have scrums and lineouts, rucks and mauls and the scoring is the same as union with tries, conversions, penalties and drop goals all possible, the ball being punted by the hand as opposed to the foot.

The game is all about timing and maintaining momentum the key skills being the ability to keep the wheelchair rolling while using your hands to catch and pass the ball.

Tackling, which is full on contact between two wheelchairs, can be just as physical as the union game with big hits capable of knocking an opponent out of their chair a distinct possibility!

Barnhall came out top in a closely fought competition, their prize being a game against the Irish Wheelchair 7’s side and while the qualifying games were well contested and played with great enthusiasm things certainly moved up several gears when the national side rolled onto the court!

Wow! I just wasn’t prepared for the power, pace and silky skills displayed by the Irish side as they ripped into the guys from Barnhall who were equally amazed and left grasping at shadows as the wheelchair athletes went through their paces.

The plays had the timing and co-ordination that only comes from hard work and intensive training but it was the tackles, or should I say the collisions, that had the crowds cheering and the Barnhall boys looking to get rid of the ball as soon as possible!

As to be expected it was a comfortable win for the Irish national side, I gave up on counting the tries, but this was never about the results and all in all the event was a well pitched showcase for this mixed ability sport.

I’m sure, judging by the number of smiles throughout the afternoon, and the comments after, I’m not to only one who’s looking forward to the next competition.

You can follow Wheelchair Rugby 7s Ireland on Facbook or you can show your support for the team and their defence of the Triple Crown by making a donation at Pledge Sport.