You are at:Home»Ireland»Wheelchair Rugby: Ireland prepare to defend Triple Crown. 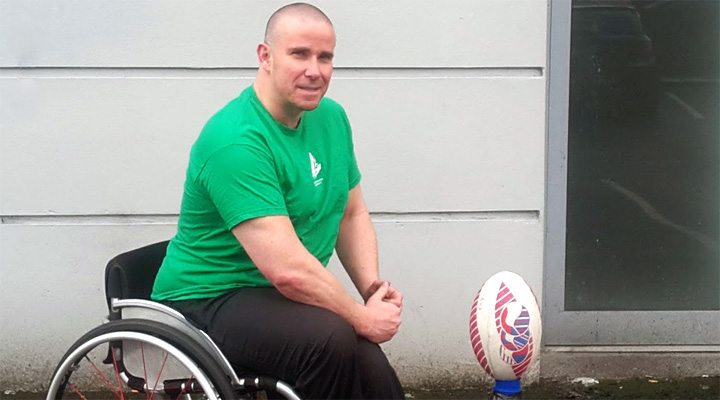 By Editor on May 2, 2014 1 Comment
Ireland Wheelchair &'s athlete James McCarthy brings the FRU up to date on preparations for this years Six Nations Championship.
ADVERTS

Ireland Wheelchair 7’s athlete James McCarthy brings the FRU up to date on preparations for this years Six Nations Championship.

The second Wheelchair Rugby Six Nations Championship takes place this summer in Paris and Team Ireland are ramping up their preparation, not just to defend the Triple Crown that they won first time round but to make a concerted effort for the Championship outright.

Last season’s appearance in the inaugural Wheelchair Rugby Six Nations was a journey of discovery for the Irish side, who adapted remarkably well to this new sport to beat England, Scotland and Wales, and despite losing narrowly to Italy and France there is a feeling in the camp that with improved and more focused training they can go a step further this time round.

The Front Row Union caught up with last year’s team captain James McCarty last weekend to discover how preparations are going for this years tournament.

FRU: So what’s the difference between Wheelchair Rugby and the rugby we watched in the Paralympics?

James: Wheelchair Rugby 7’s tries to recreate able bodied 7’s rugby as accurately as possible. There are tries, conversions, drop goals, penalties, line-outs and scrums. It’s as close to “normal” rugby as we can get and it’s also open to able-bodied players, who obviously play in a wheelchair. We’re having a Challenge Tournament this Sunday (11th May) in Clontarf so why not come along and give it a go?

FRU: How did you get involved?

James: We got a call last February (2013) from a guy in France who had a dream of playing in a Wheelchair Rugby Six Nations.

We didn’t know quite what to expect but when we saw that it was exactly like 7’s rugby with basically the same rules and points we were delighted. Quite a few of the team are big rugby fans and this was a chance to play the game we love and represent the country we love.

FRU: It seems to have taken off in quite a big way over the last year. What is the current set up in Ireland?

James: At the moment it’s still fairly centralised. We do have players from all over the island but the training sessions are centred in Dublin.

The goal we have over the next few years is to have a Provincial league. It’s up to us as players in the national squad to take the game to the provinces and get it going. With Rugby Union already popular in Ireland it gives us a set-up to piggyback on.

FRU: Are you getting any help from the IRFU?

James: Not at the moment. Really it’s up to us to build up our brand and raise awareness of the sport before we go to those types of organisations for support.

FRU: What has it meant to you as a disabled person to be able to take part in this sport?

James: I suppose when I was going to rugby as a young fella I would have loved to have been out there on the pitch.

You can look at that one way and say because I have a disability I can’t play rugby or you can look at it and say well what CAN I do? When the opportunity arose I grabbed it with both hands.

The health aspect of any fitness sport helps obviously, we have trained hard and that has it’s benefits. You get a huge confidence boost playing a game that you never thought you could.

FRU: How did it feel when you were awarded the captaincy last year?

James: Obviously an honour. I was chosen as captain because of my international background in the Paralympics and I suppose I’m a bit of a natural leader!

To lead out your country in any sport is a huge honour, but, coming from a rugby family, it was a massive honour. The biggest thing was lining up for that first game against Wales and hearing the anthems – it really hit home why we were there.

FRU: Last year Ireland won the Triple Crown what are your aims this time round?

James: The team has set standards and goals for ourselves and the minimum would be the Triple Crown. we were 8pts away from winning the Grand Slam last year. We lost to Italy by 1pt and France by 7pts  and we feel we are good enough to beat them now.

We’ve improved a lot, we’ve worked hard to get two good coaches in from Leinster who have brought our skills levels up a lot. We know ourselves that we left it behind us last year and we want it!

FRU: Do you receive any financial support?

James: Basically we fund ourselves. We have a fundraiser this Sunday (11th May) at IWA-Sport, Blackheath Drive, Clontarf, Dublin 3 where we’ll be playing challenge games against able-bodied and disabled players and we have a fundraising page over on Pledge Sport https://www.pledgesports.org/projects/grand-slam-2014/

All donations big or small are very welcome.