U20 Six Nations: Who did what in the Ireland U20’s

Ireland U20’s have completed their most successful U20 Six Nations campaign ever, picking up their first ever Grand Slam and their second ever outright Championship title.

They recorded their highest ever points scored, at 150 points, and though they have conceded less points over the years their total points conceded of  92 against is their lowest over the last four years showing, almost halfing lat seasons total of 182 points against.

The team scored 18 tries, 15 of which were converted, giving a conversion rate of 83%. A further 20% of their points came from penalties, with 10 penalties landed throughout the tournament.

Head coach, Noel McNamara named a total of 33 different players in his match day squads. However, four of those players were unused throughout the tournament resulting in 29 players receiving caps.

McNamara made few changes to his starting side and there were few tactical substitutions. A core of 19 players accounted for 94% of the total match time which is extraordinarily high in this modern abrasive game.

Ulster were represented by Angus Kernoghan (Queen’s University), Callum Reid (Banbridge) and David McCann (Banbridge). Iwan Hughes (Ballynahinch) was in the squad for the last game against Wales but didn’t get any game time.

The complete list of all the individual minutes played can be viewed by clicking below.

Ireland U20 - minutes played by player

There were a total of 14 Clubs represented with UCD having the highest representation, with over 20% of the minutes on the pitch taken by UCD players.

The minutes on the pitch by club is shown below. 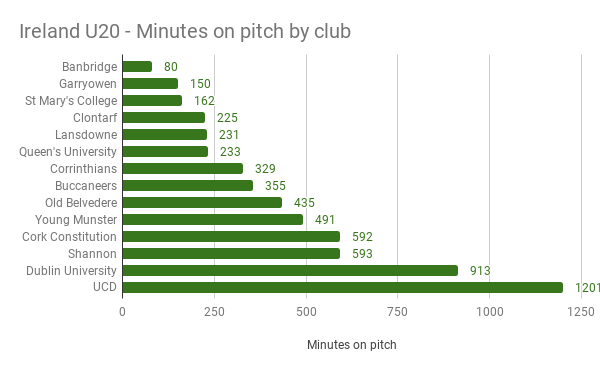 From an Ulster perspective the club representation is quite low with players from only Queen’s University and Banbridge getting game time.

Looking at the provinces as a whole we get the following. 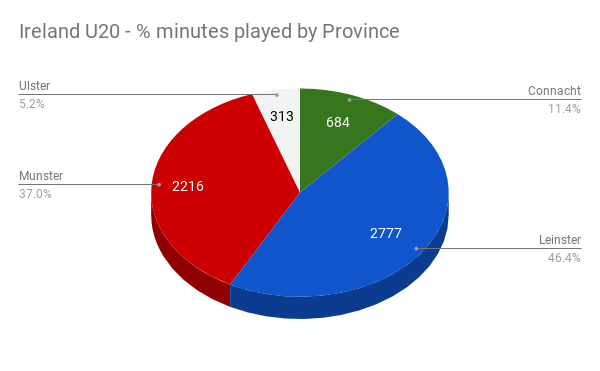 The Ulster representation is the lowest it’s been in the Six Nations for four years and it’s a disappointing level of involvement given the number of players named in the original training squad. It’s quite a slump from the 26% representation that Ulster had last season. Generally Ulster’s involvement does tend to rise over the U20 World Championship, when more players are realeased, but it’s difficult to see who, if any, have been held back from Ulster’s cohort this season?

Given the huge success of Ireland in the U20 Six Nations it’s doubly difficult to see how any of the Ulster lads are going to break through between now and June and, it’s hard to justify otherwise.

As we stated in the introduction, Ireland scored 18 tries. An astonishing 13 came from the forwards with the backs picking up 5.The front row union picked up 9 tries in total with, hooker, Dylan Tierney-Martin (Corinthians) leading the way with five.

From and Ulster perspective Callum Reid (Banbridge) was the only Ulster player to trouble the scoreboard, with a try against France.

Out half Harry Byrne leads the points scored table with a total of 36 points from 9 conversions and 6 penalties, Tierney -Martin is in second place wit his 25 points ahead of “replacement” out half  Ben Healy who knocked over 22 points with the boot.

The full list of points scorers is shown below.

In terms of Club representation the points are fairly evenly spaced with Garryowen, Corinthians and Lansdowne leading the way by virtue of the individual efforts of Healy, Tierney-Martin and Byrne respectively. 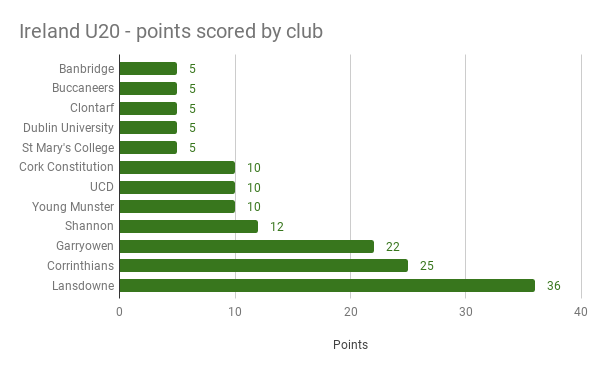 Putting the players into Provincial representation gives us Munster just edging out Leinster ahead of a healthy total from Connacht. Ulster looking somewhat lonely way in the back. 😥 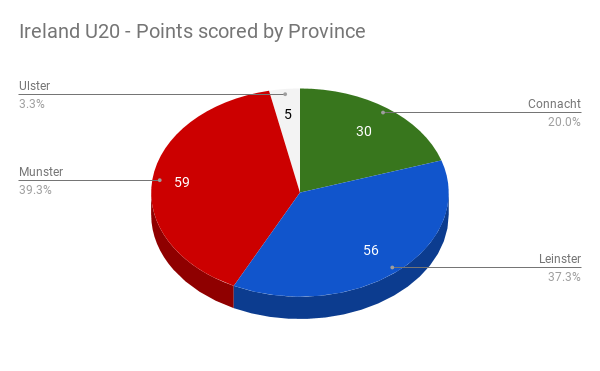 All in all, a hugely successful tournament for Ireland U20’s and it was a tournament built on a strong pack and a particularly tenacious front row. The two home matches were both records for stand alone U20’s matches, I believe, so the move to Cork was definitely a good one.

If anyone enjoys jumping on a bandwagon it’s the Munster crowd and I believe there are already 200,000 claiming they were at the French game. I look forward to the book, play and film over the years. 🙂 🙂 🙂

In all serious it was a hugely impressive performance from the Irish lads who dug deep against England and France, whipped on by the passionate support at Irish Independent Park.  Given the fairly disastrous performances in the last two World Rugby U20 Championships, it’s exactly what this team needed and they should travel to Argentina at the end of May in a confident mood.

However, success in the U20 Championship is far from a given for two reasons.

Having said all that, these U20’s matches are often won and lost in the head, before a ball is kicked, and that might just be the key that gets this particular group into a top four finish. Looking forward to it already.