Ireland women made history as they qualified for their first ever HSBC World Rugby Women’s Sevens Series semi-final. We take a look at their performances in Day 1 and Day 2.

Ireland topped group B as they went undefeated in Day 1 in Spotless Stadium, Sydney. In their group was Russia, Canada and Fiji, two out of the three teams currently higher in the World Series standings. Canada sitting second and Russia sixth just ahead of Ireland.

Going into Sydney, Ireland team had suffered injuries to many of their series regulars. Notably Stacey Flood, Ashleigh Baxter and Katie Fitzhenry all missing. This allowed the inclusion of Anna McGann and debutant Beibhinn Parsons who joined the squad alongside FRU Favourite Brittany Hogan.

Ireland drew their opening match 7-7 against Russia, in a game that both teams battled it out with none of them really taking it to the other.

Both teams looked like they were trying to dust the cobwebs off in a first-half filled with errors leading to a nil nil draw at the half.

It was Eve Higgins who took the game to Russia and crossed over the line. A break from Aoife Doyle followed by one from Brittany Hogan allowed Higgins exploit space out wide, with a Lucy Mulhall conversion making it 7-0. Russia hit back almost immediately to even things up, with a break up the midfield from the restart.

Neither side managed to go on to claim a winning score, and the game finished in a 7 all draw. 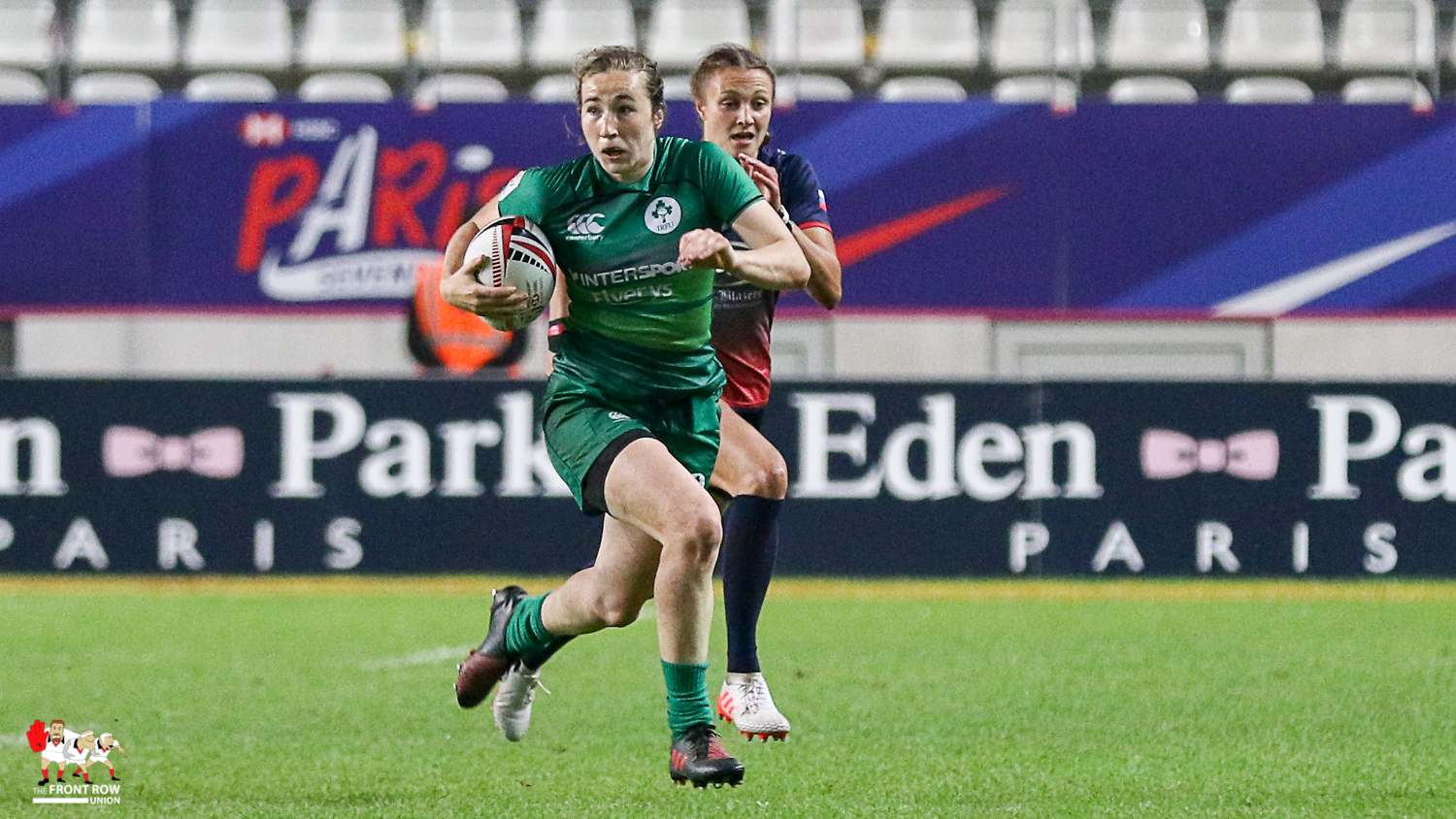 Canada were silver medallists at the last World Series leg in Dubai and had started with a comfortable 36-12 win over Fiji.

Ireland had a bad start to the game with Canada scoring two converted tries in quick succession to make it 14-0. Ireland didn’t look phased by the score line and responded through Hannah Tyrell with a brilliant individual run through two defenders to cross out wide. Mulhall missed the conversion but Ireland were back in the game.

Ireland’s confidence grew and lead to a well worked team try with Louise Galvin dotted down to leave it 14-10 at the break.

Ireland, who now were in the ascendency, looked to press on in the second half. Their defensive pressure lead to a great attacking lineout in Canada’s 22 and a well worked move allowed speedster Amee-Leigh Murphy-Crowe cross in the corner, bringing the score to 15-14. Ireland held onto their 1-point lead giving them their second ever win over Canada. Leaders New Zealand are the only other team to beat Canada so far in the HSBC Women’s World Rugby Sevens Series. 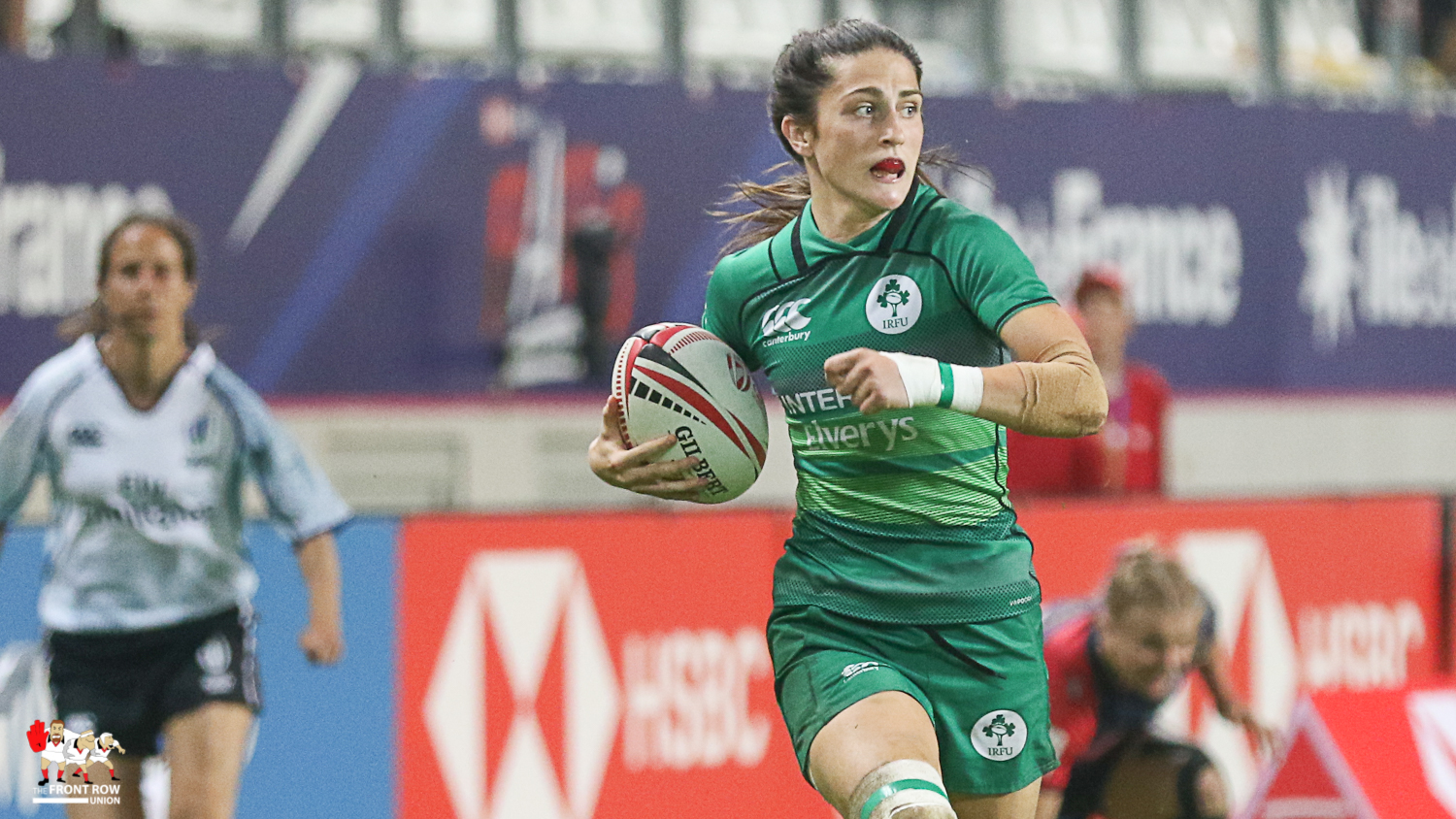 Ireland faced Fiji in their final game of Day 1. The flying Fijians needed a win to secure a place in the Quarter-Finals as they had defeated Russia 21-12 in their second game of the day.

Again, was a poor start from Ireland with Fiji scoring in the first 15 seconds after a break up the middle from the kick-off. However, Ireland responded well and Deirbhile Nic A Bhaird used some excellent footwork to get outside her defender and put Murphy-Crowe into space to score 60th World Series try to make it 5-5.

Ireland continued to dominate with go forward ball and another well worked line out allowed 17-year-old Series debutant Béibhinn Parsons to cross for her first international try, after becoming Ireland youngest international during the November International Series for the 15’s. Ireland went into the half with a 10-5 lead.

It was Ireland turn to start well from a restart, as Tipperary native Murphy-Crowe used footwork and speed to score her second try of the game. Closely followed up by her crossing again to complete her hat-trick giving a 22-5 lead to Ireland.

The Fijians refused to give up and more issues from the restarts for Ireland lead to an unconverted score. Ireland continued to go for another score but a loose pass from Louise Galvin in Fiji’s 22 allowed for an intercept try bringing the score to 22-19.

Fiji’s intensity increased to try steal the win, but poor discipline lead to a red card for a dangerous tackle. Ireland held onto possession and managed to hold onto the win to remain undefeated and top their pool, a first for this Ireland team. 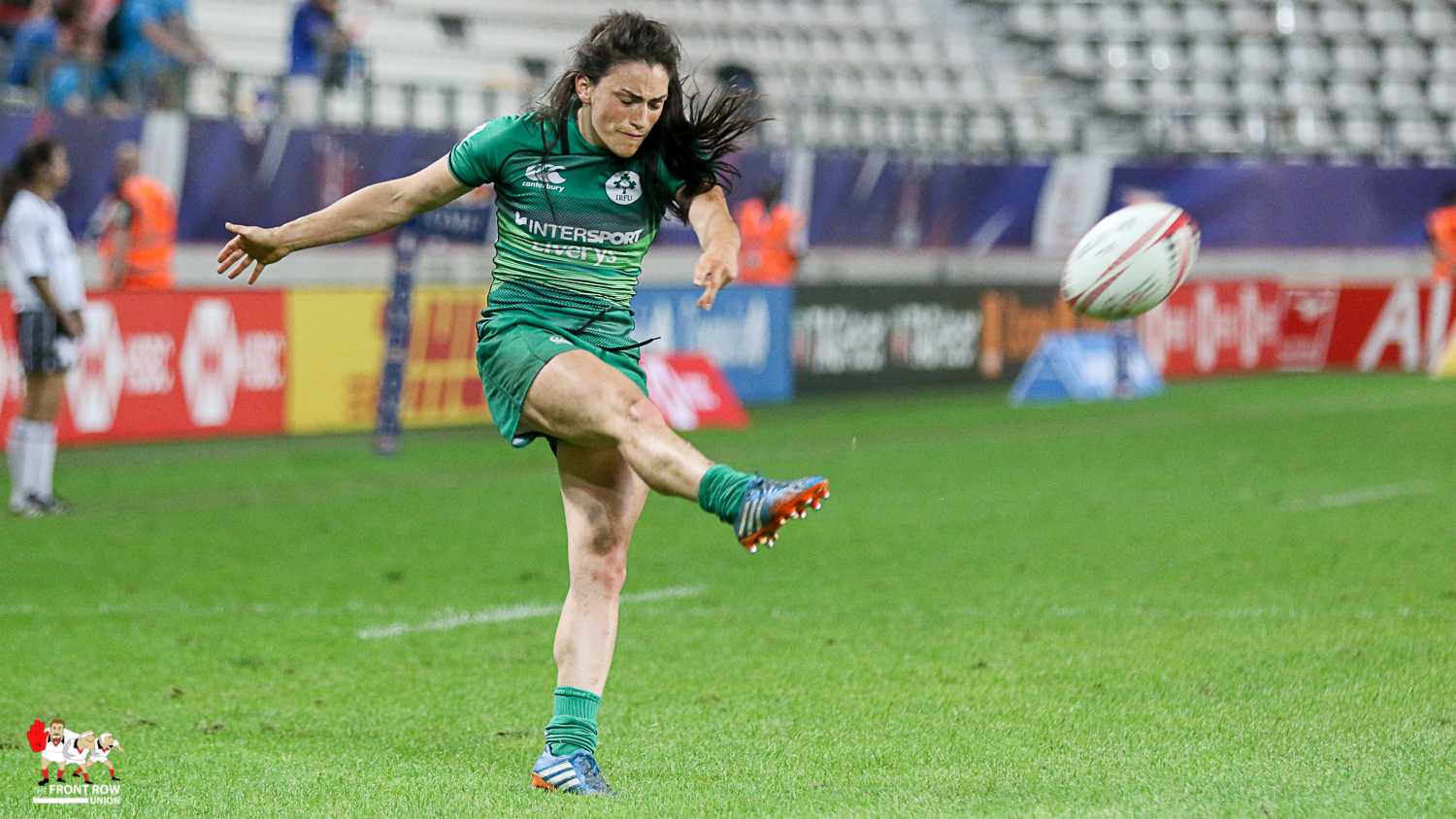 Spain would have favoured themselves going into the game as they have only had two last four performances before, something Ireland had not yet achieved.

Ireland started the game with their dogged defence and pressure cause a Spanish handling error in the first minute. It was again Eve Higgins to attack the line, she liked well with Amee-Leigh Murphy Crowe, who passed it back the Higgins to score the opening try. Lucy Mulhall converted giving Ireland a 7-point lead.

Higgins continued to cause havoc for Spain, attacking the line well and stepping defenders at ease. Spain’s Patricia Garcia having to work hard for penalties for her team to relieve pressure. Anna McGann was sent off for Ireland late in the first half for a deliberate knock-on, but Ireland played tight with her exclusion. A penalty in front of the post just before half time allowed skipper Mulhall to go for posts, giving Ireland a valuable 10-0 lead going into the half.

Ireland started the second half with good continuity, and back to seven players, worked up the pitch well. Again, it was Ireland defence that seemed to be their greatest strength, securing penalties at the breakdown. Higgins continued to provide go forward momentum and close ruck plays allowed Murphy Crowe to break close to the ruck to run clear. Mulhall converted giving Ireland a 17-0 lead.

Another Hannah Tyrrell break allowed Ireland to work the ball wide to Murphy Crowe out wide, looking like it had secured the semi-final for Ireland with 2 minutes to go. Spain however continued to press hard and scored a try of their own with the last play of the game. Crashing under the posts to bring the score to 22-7.

Ireland now face hosts Australia in the semi-final kick-off 10.56pm Irish time/9.56am local time. The last time Ireland faced Australia was in the 5th place play off in Glendale, with Australia nabbing the win late in the game 21-19. Ireland will be looking to right this time around to secure their first ever final.