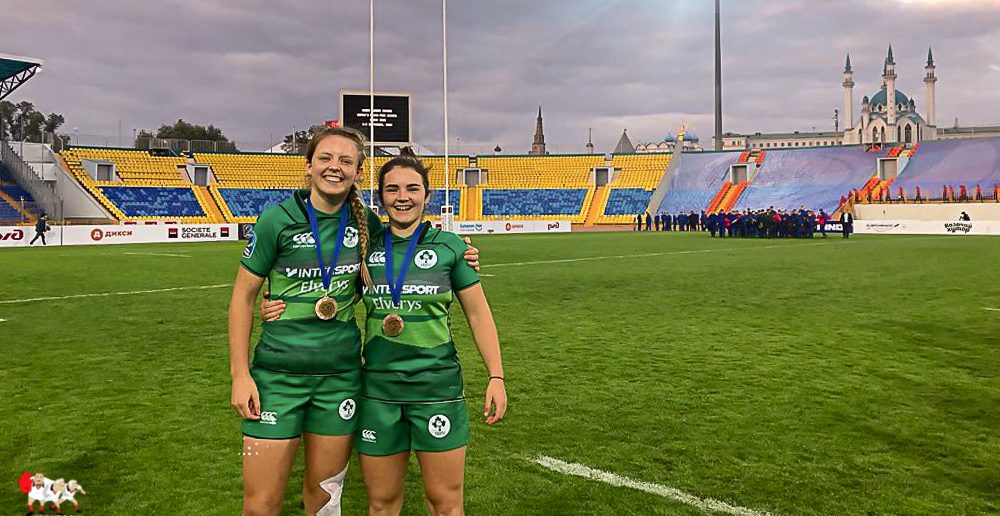 “The Ireland Women’s 7s team flew to Kazan for the 2nd leg of the Rugby Europe Grand Prix Series on the 1st and 2nd of September 2018. We were there to compete against other countries to achieve as high a standing in Europe as we could. It is also where I gained valuable game time at International level as it was my first cap; it was a real learning experience.

“Kazan itself was amazing. The whole team experienced a shared buzz as we were delighted to be there and also to be treated so well by the Russian Federation of Rugby. The area that we stayed in was close to the centre of Kazan and the hotel was shared with the other teams who we were competing against. We also happened to be competing at the same time as “Kazan’s birthday” so there were festivities held on the street outside our hotel and beyond. The food and accommodation were beyond our expectations, we couldn’t have asked for any better.

“For our jersey presentation, we were able to have the opportunity of going to the heli-pad, or ‘observation platform’ which looked over the city of Kazan. This made the moment extra special. It was extra special for myself anyway as I was presented my jersey by Stan McDowell, my first National coach at U18 level who has brought me through the entire pathway.

“I was incredibly nervous before the first game, we warmed up really well and the energy was flowing but my stomach was doing somersaults. I felt these nerves passing over the day and following into day 2 but they were always there. I felt like as I got more confident and comfortable playing at that level, I calmed and got into the games more, which was good.

As a team, we placed 5th overall during the weekend which was enough to secure the previous teams’ bronze medal in the first leg. Therefore we helped achieve 3rd in Europe and were given the bronze medal.

“We flew to Japan shortly after we were home from Kazan for a tournament in Hokkaido. This was named the Governor’s Cup and was an invitational tournament which we competed in with Australia, New Zealand, Canada, USA, Japan, Hokkaido Barbarians and the Cooke Islands.

“We also achieved 3rd place in this tournament and came home to prepare for the training tournament our Development side are competing in on the 5th, 6th and 7th of October. I’m especially excited for this tournament as I can get some game time alongside my team FRU teammate, Lucinda Kinghan. This is credit to FRU’s help over the last few months in developing our players skillswise and also in other aspects of the game such as leadership qualities.”