Ireland Six Nations Review. Who did what!

There are a lot of stats available for the senior men and it’s taken us a while to work through them. We are finally done, so here’s our review of Ireland Men’s performance in the Six Nations.

The success of the tournament is probably slewed by the win against England in the final match of the tournament. Up until then, it would probably have been regarded as a disappointment following losses to Scotland and Wales. In such a parochial country the win against England carries undue weight but it did get Ireland to a second place finish, thanks largely to their points difference against Italy.

That day in the sun certainly helped Ireland’s cause, especially when you consider their points difference against the other four sides was -4. CJ Stander and Craig Gilroy paid their wages back that day!

Joe Schmidt used 33 players throughout the tournament, 2 Connacht, 14 Leinster, 10 Munster and 7 Ulster giving Ulster a 21% representation. However when you look at actual minutes played in the tournament the real player involvement looks a bit different. 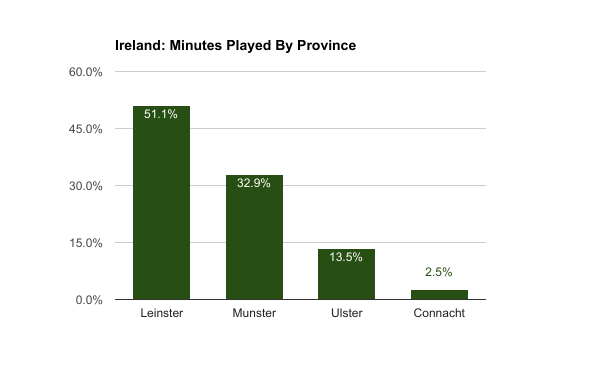 As with the Ireland U20’s and with Ireland Women Ulster have to be very disappointed with their representation to the International side. It’s certainly a long way short of the “World Domination” we were promised seven years ago! There certainly doesn’t seem to be the numbers coming through the U20’s but we’ll cover that in our next article!

Connacht, as reigning PRO12 Champions, have to feel hard done by with only 2.5% representation, though if you included Robbie Henshaw in their figures their representation would rise to 8.7% and Leinster’s drop to 45%.

Similarly, if Jarred Payne and Andrew Trimble had been fit, Ulster’s representation would have jumped to over 20% but keeping key players fit seems to be part of the problem at Ulster Rugby.

Those that did stay fit throughout the series are shown below in the top six players by minutes on the pitch. 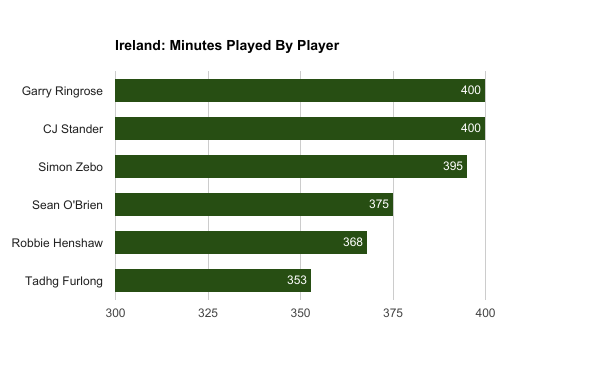 The first Ulster player is Rory Best at 10th with Ian Henderson coming in at 16th and Paddy Jackson at 17th.

Of course it’s not just about minutes on the pitch, but what you do when you are on there and it appears that the Ulster players are punching above their weight! Just a word of warning though before thought’s of “World Domination” start creeping back. These stats are heavily influenced by that one game against Italy.

Ireland scored 14 tries and conceded seven, though nine of Ireland’s tries were scored against Italy which skews the statistics somewhat. However thanks to tries from Paddy Jackson, Craig Gilroy (3) and Ian Henderson (2) Ulster did overperform. Jackson also had a particularly fine tournament from the tee. 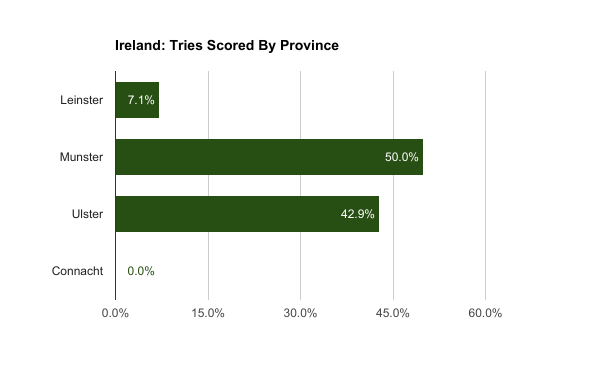 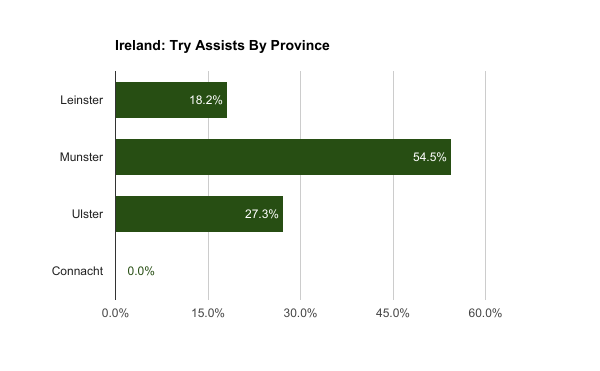 Munster also featured heavily in tries scored and try assists with Leinster featuring well below the level of their representation. However when we look at total points scored the presence of Sexton does improve their stats somewhat. Ulster do dominate though. 🙂 Jackson was the leading scorer in the tournament with 36 points to Sexton’s 25. 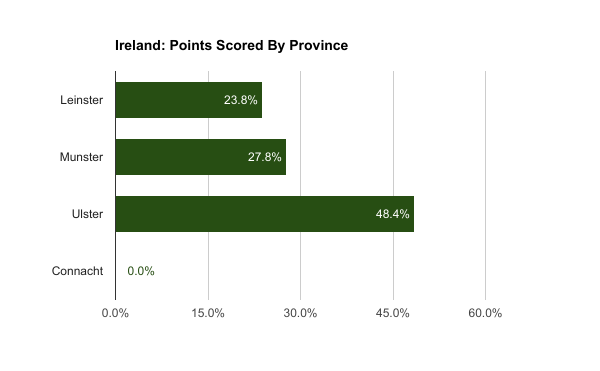 When we look at clean breaks, meters made and passes made it looks like Munster are carrying the workload and setting up the chances. Note – offloads were so low for Ireland as a whole that we discounted them.

Ulster just about hold their own in all three categories, and Craig Gilroy scored a try in every clean break he made. However it was Earls and Zebo top of the clean break chart with 8 each out of a total of 45 for the tournament. 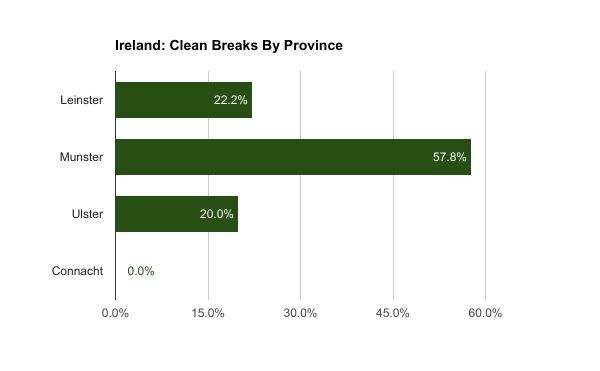 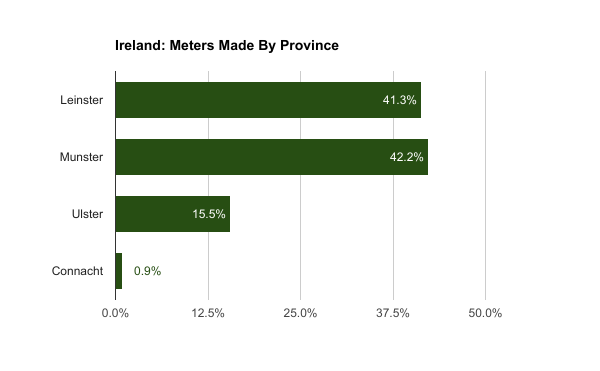 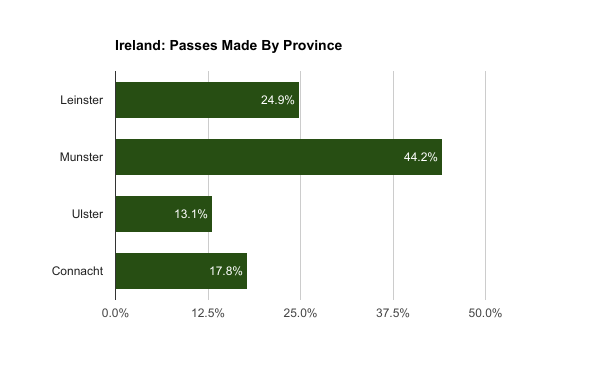 Tackles are the cornerstone of defence and it’s Leinster leading the way with tackles made, Ulster just about holding their own in this regard – we’ll I suppose they were too busy off scoring points :). CJ Stander and Jamie Heaslip top the tackles made chart with 52 each.

Pleasingly Ulster  have fared well with tackles missed with them dodgy Leinster players top in this one as well. Ringrose and Henshaw missed the most tackles throughout the series missing 8 and 6 respectively.

However with Ireland completing 674 tackles successfully and missing only 60 a tackle success rate of 92% has to be good. 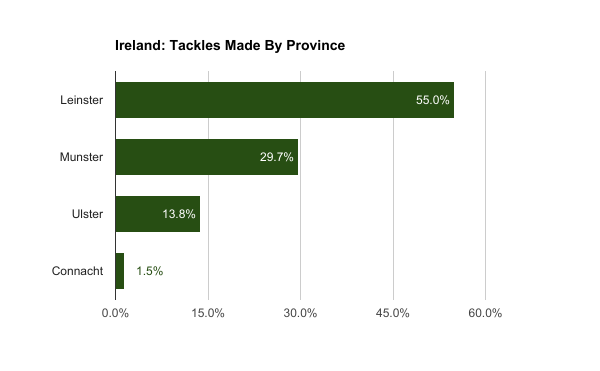 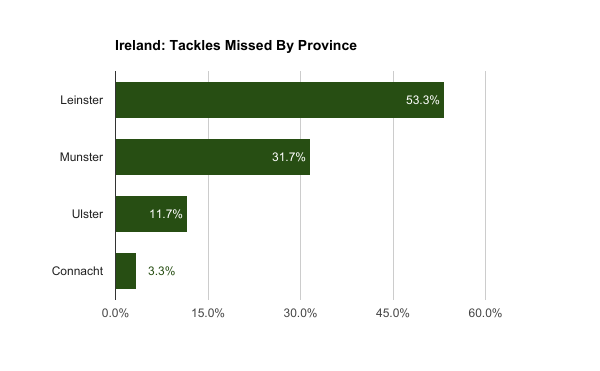 Looking now at turnovers we again see Ulster doing particularly well, though it has to be pointed out that Ireland completed only 31 successful turnovers while conceding 68, which has to be a worry!

Ulster’s Rory Best, Paddy Jackson and Ian Henderson were at the top of the turnovers won with 3 each. Zebo, Earls and O’Brien topping the turnovers conceded losing 6 each!  Flogging isn’t good enough for them! 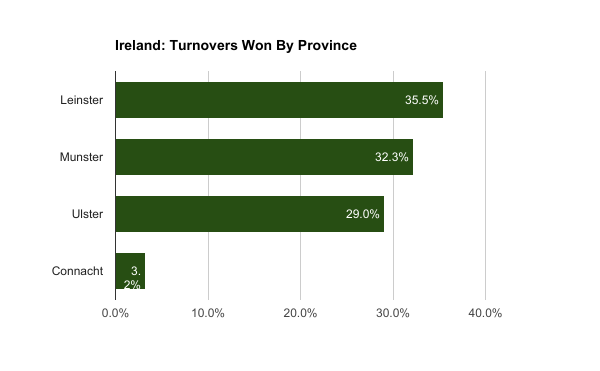 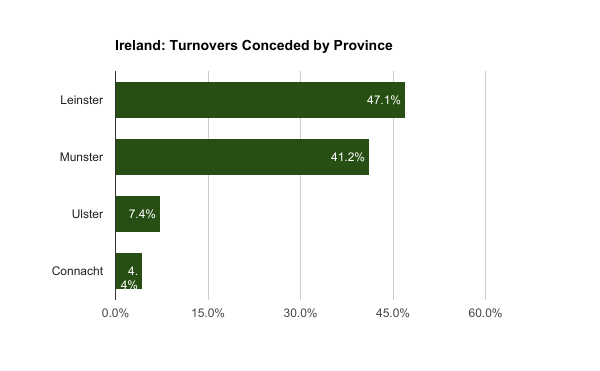 Of course the stats have to be looked at in the round. I’ll be building on the information we have and taking it back to the Autumn series as well as we’ve already done with Ireland Women.  I think this was a worthwhile exercise if only to counter the frankly false impression coming out of Ravenhill on the “World Domination” angle. Seven years and counting!