Hannah O'Connor returns to top of the Leading Scorers Table.
2019-20

There were three fixtures completed in Week 12 of the Energia Women’s AIL with the match between UL Bohemian and Galwegians postponed.

The results from the matches completed were as follows.

You can view our coverage of two of the matches by clicking the links below.

There wasn’t much of a change in the league standing. UL Bohemian are still top, Railway Union remain in second spot and Blackrock and Old Belvedere consolidated their top four standings. 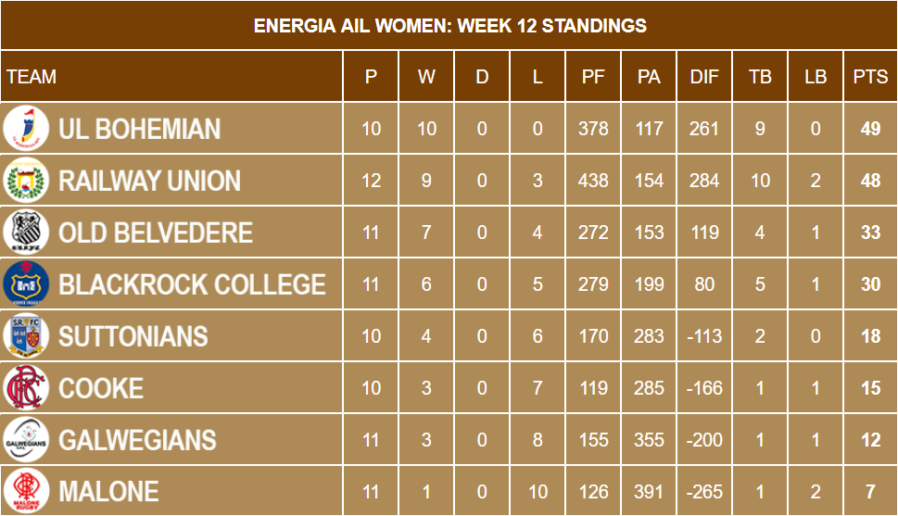 So another fixture has been added to the re-fix list. These fixtures will take place between now and 21st March. You can view all the re-fix matches in the dropdown below.

We’ll update our figures as these matches are completed but it’ll be after the 21st before we do a complete wrap.

There were 152 points scored this weekend, the points coming from 25 tries, 12 conversions (48% conversion rate) and 1 penalty. We are still waiting our first drop goal in the Women’s AIL – maybe we should have a special prize for the first?

Railway Union and Blackrock clocked up over 100 points between them and the two clubs dominate our leading scorers for this week.

Long standing FRU Favourite Larissa Muldoon (Railway Union)  leads the way this weekend with 16 points from 2 tries and 3 conversions. Muldoon is followed by teammate Aoife O’Shaughnessy who ran in 3 tries for 15 points.

O’Connor’s haul at Cooke sees her reclaim top spot in the leading scorers table and Muldoon jumps into the top six for the first time.

Despite their being a hattrick and a couple of braces this week Hannah O’Connor is the only player to make it into the leading try scorers table, jumping in at joint fifth. 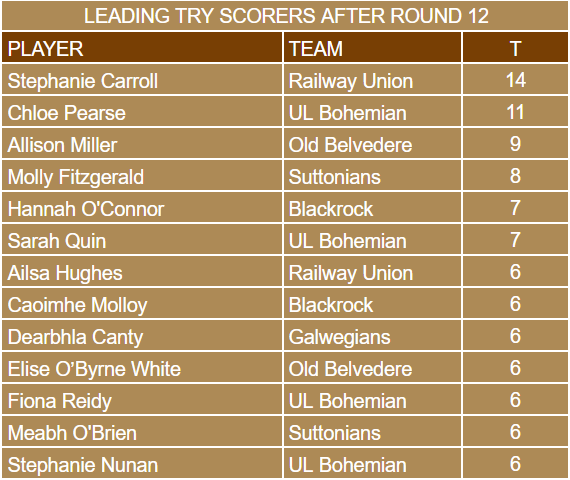 As we said, we’ll do a full wrap when all the re-fix matches are completed along with an update on the Player’s Player nominations.