Week 6 of the Energia AIL ended with UL Bohemian consolidating top spot, Old Belvedere starting their charge for the top two and Malone and Galwegians still looking for their first win.

We got out to two matches and you can view our reports and galleries by clicking below.

Three of the matches went as our statistics predicted with Blackrock, Belvo and Bohs picking up the wins.

Suttonians were the only side to buck the trend with a convincing win against Cooke at Station Road. The result sees TRIBE leapfrog Cooke to go into fourth place.

Blackrock’s win at Gibson Park sees them put a bit of space between themselves and the bottom two. 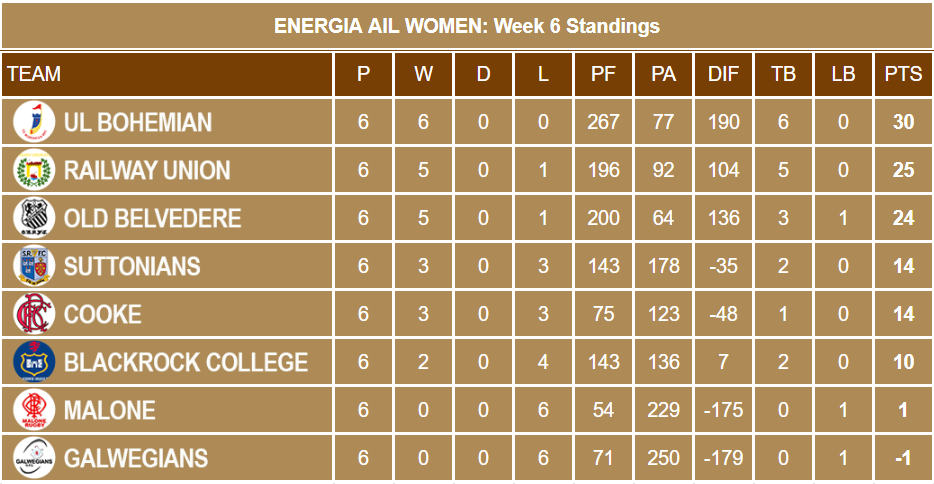 There were 191 points scored this week with the points coming from 32 tries, 14 conversions (44% conversion rate) and one penalty.

Suttonians Molly Fitzgerald was the top scorer for the week with three tries. Jemma Jackson (Old Belvedere) was next with 12 points from 5 conversions followed by Hannah O’Connor (Blackrock) who clocked up 11 points from a try and three conversions.

Blevo pair Alison Miller and Linda Djougang each grabbed a brace of tries as did Sutt’s Greer Muir.

The weekend’s activities see Hannah O’Connor depose Chloe Pearse by a single point at the top of the leaderboard with Alison Miller staying in the mix in joint second.

Ulster Players Jemma Jackson and Vicky Irwin both come into the leader-board with Jackson making a bit of a charge up to 4th and Irwin joint 6th. 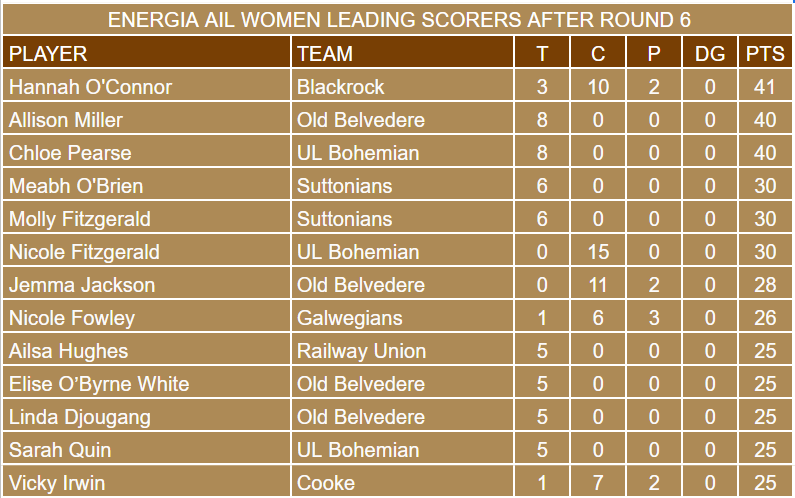 You can view the individual club scorers below. Let us know if there are any errors.

The nominations for Week 6 are as follows.

Congratulations to all those recognised by their fellow players.