By Editor on September 8, 2019 0 Comments
All smiles at Dungannon as they knock Malone out of the Ulster Senior Cup
CLUB MEN ADVERTS

Malone enjoyed superior possession but didn’t come away with the win from Stevenson Park. The reason – an inability to finish off their attacks in the red zone and the dogged, organised and committed defence of the home team.

The red socks kicked off and piled on pressure with fast recycled ball. Just short of 15 mins Malone collapsed an attacking scrum in Dungannon’s 22 and from the penalty Dungannon kicked long forcing a knock on and from the resulting scrum Dungannon’s wing Jonathan Toal came inside on a short pass and burst through the 10/12 channel and around full back to score Dungannon’s first try, converted by Jordan McIlwaine. 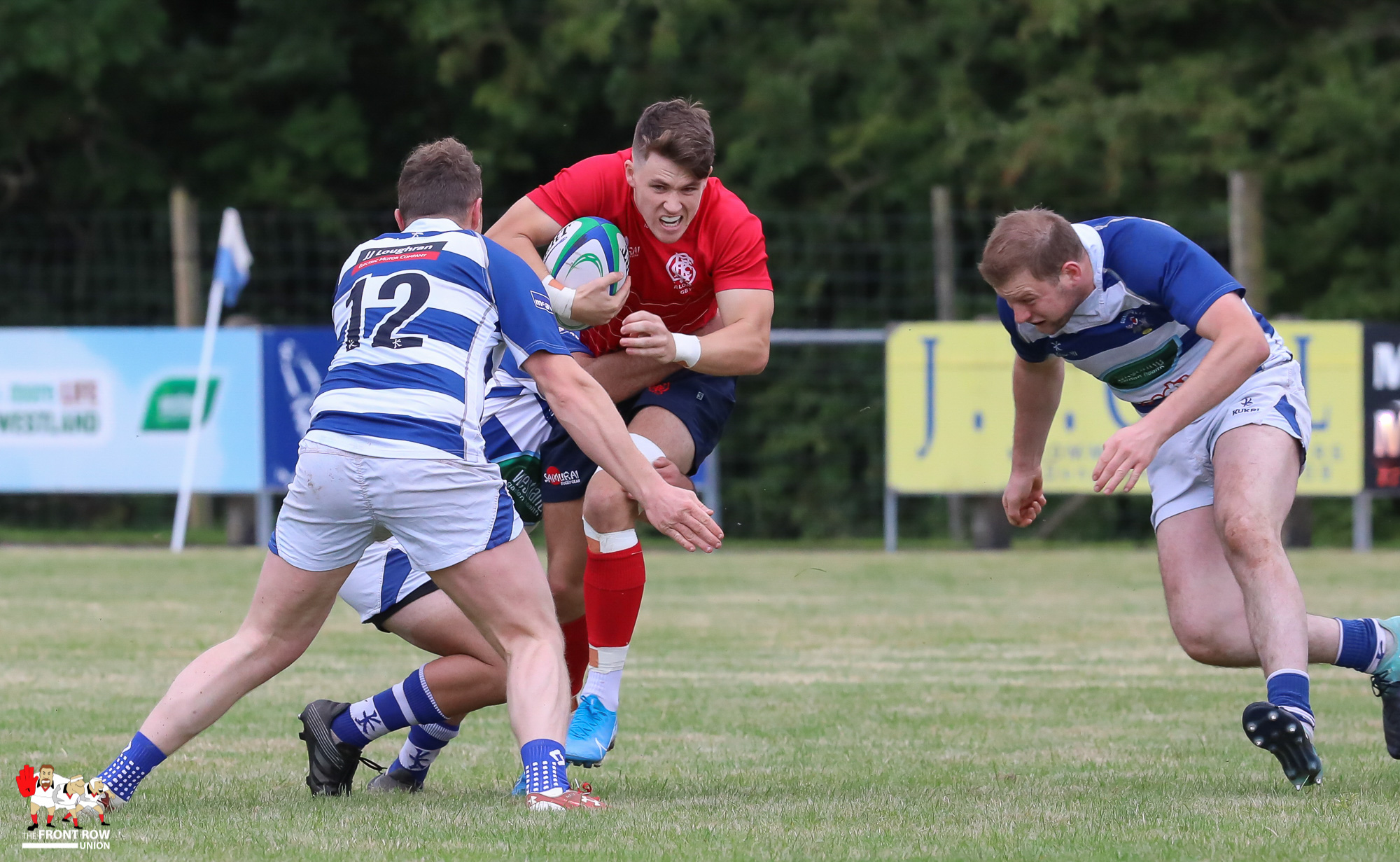 The Dungannon defence worked hard throughout the match.

Play was mostly in the Dungannon half and eventually the home defence cracked with multiple players off side during open play. Malone’s Campbell goaled in front of post on 24 min to take the score to 7-3.

The home side weren’t in the opposition territory much in the first half but when they were they made it count. On 28 mins a maul from a line out on Malone’s 22 was skilfully controlled and hooker Malcolm Allister fell over the line to add another 5 points to give Dungannon a 12 – 3 advantage.

The physical battle midfield was brutal with Dungannons lock, James McMahon frequently charging at Brown and, for the visitors, hooker Clayton Milligan and Stuart Dodington caused mayhem in the loose.

Sadly for Malone, Dodington was an eventual casualty of this ferocity and was helped off the field on the 33 minute.

Malone kept battering away and in the 35th minute Dungannon’s prop was binned for illegally tackling Malone’s scrum half. Campbell again took the 3 points. Malone launched a great run down the right wing with great interplay between fullback and winger but again super cover tackling prevented any score.

Right on half time Dungannon forged into Malone’s half and earned a penalty. The kick was accurate from McIlwaine and the score ended 15-6 at half time.

Dungannon started the 2nd half strongly but couldn’t break the Malone line. Malone countered with a promising break but dropped the ball at a critical moment when it looked like they might touch town in the corner.

It took until the 54 minute for the home team to push further ahead, spreading the ball out wide and Matthew Montgomery finishing off for try number three to  push the score along to 20-6. 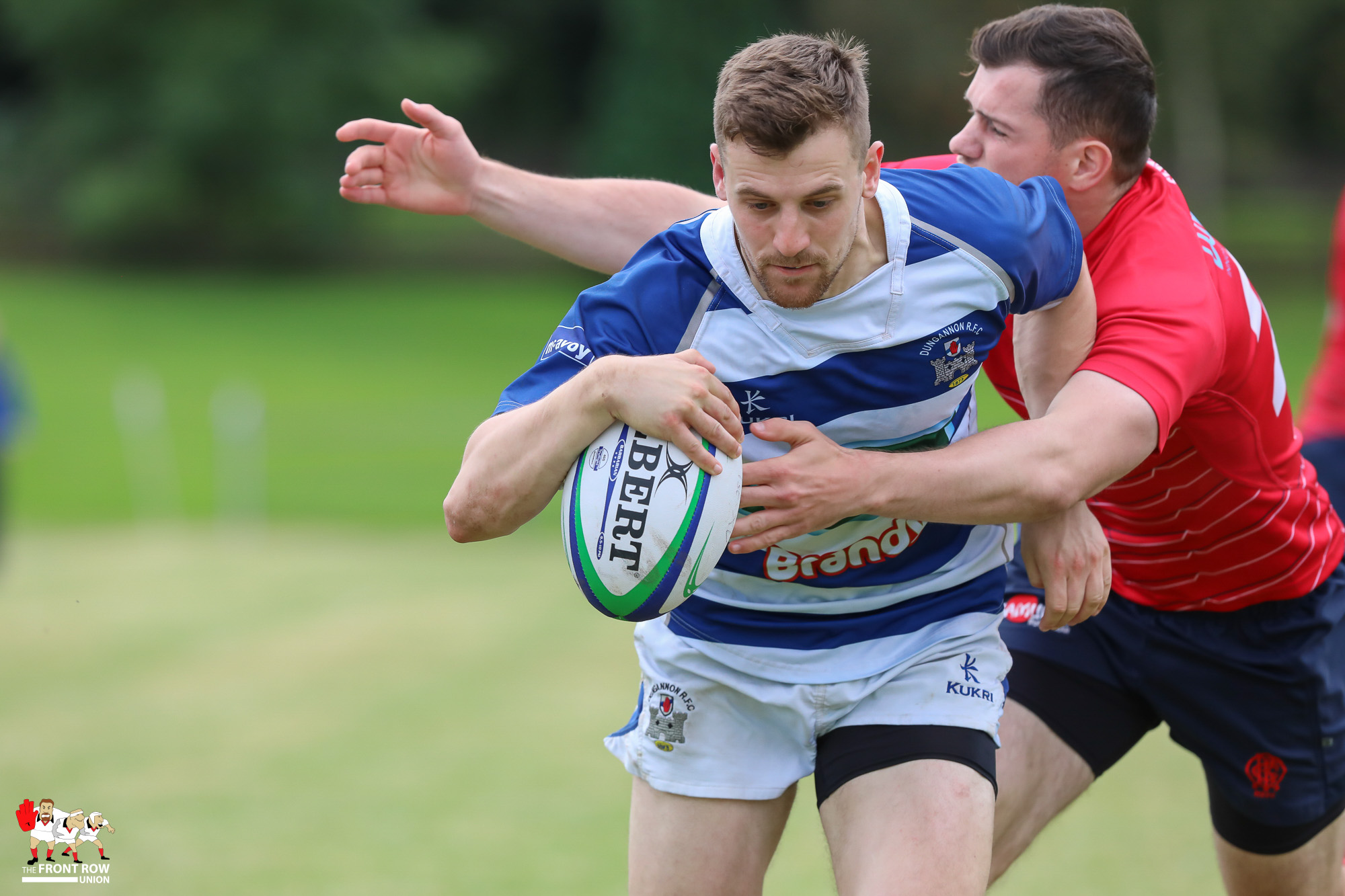 Dungannon break for the line against Malone.

Malone kept possession and eventually got into a good position. After three  phases from  a line out the visitors scored under the posts for an easy conversion to take the score to 20-13 at 62 mins.

Both sides were now getting loud as mistakes increased on both sides. Some scrappy play but Malone gave away a penalty on their 22 and this time McIlwaine converted.

From the immediate restart Malone got the ball and 4 phases later, after some slick running, Bryans scored near the posts and Campbell converted to take it to 23-20 at 73 mins.

This game was being played at a blistering pace and Dungannon were straight back at Malone and they got a penalty try from another powerful Dungannon scrum 5 metres out on the 76th minute with a yellow card shown to the red socks hooker.

Malone went back on the attack. They collected the ball from the restart and threw themselves at the Dungannon line . They looked to be in but Dungannon’s wing slapped ball away and he was sent to the bin leaving 14 men each with 3 mins to go. Dizzying stuff.

Malone had a final fling with a penalty on 79 mins. They needed two scores and quickly opted to run the ball but knocked on to end the game.