By RossFRU on July 18, 2019 0 Comments
Friday 12th April 2019. Ulster guarantee a top two finish with a convincing win against Edinburgh at Murrayfield on Friday night.
ADVERTS

Ulster may be back in pre-season training ahead of the new campaign however, it’s never too late for a reflection on the season past. With a Champions Cup quarter final appearance and a semi final finish in the Guinness PRO14 last season saw an improvement from the previous one in terms of results.

Ulster’s Heineken Cup run which culminated in a plucky quarter final exit to Leinster was undoubtedly one of the major highlights of this season. Back in June, when a coachless Ulster were in pot D and drawn in the same group as Racing 92, Scarlets and Leicester Tigers it was understandable to write Ulster off as the bottom side in the pool or third at best.

Instead, two stunning Jacob Stockdale tries, breakdown masterclasses from Messrs Best and Coetzee and a super performance from Kieran Treadwell saw Ulster travelling to Welford Road needing a win over Tigers to progress to the quarter finals.

It was a poor performance to see Ulster through but tries from Marty Moore and Robert Baloucoune got the job done against Tigers allowing 15,000 – 20,000 Ulster supporters to descend on D4 to cheer on the boys against Leinster. Ultimately it wasn’t to be on the day but we did get a glimpse of how well they can perform against Europe’s elite and now the challenge is to do this on a more consistent basis.

On paper there perhaps are no reasons for Ulster to be optimistic ahead of next season with a cynic citing a poor season from Scarlets and a terrible closing run of form from Edinburgh to snatch Challenge Cup rugby from the jaws of home quarter final.

Similarly some would say playing Scarlets during the back to back matches in Europe was favourable: they had lost their opening two matches with no bonus points leaving them needing a miracle to progress. Ulster have always been able to lift their performance when the French and English teams come to town and this season was no different when Ulster defeated Racing 92 thanks to a masterclass from Jacob Stockdale.

So how good has Ulster’s season been?

Ulster won 66.6% of their matches this season, up slightly on last year’s total of 64.3%. It represents their best outlay of results since 2013-14 where they won 75% culminating in a quarter final exit to Saracens in the Heineken Cup and a semi final defeat to Leinster in the league.

While the semi final finish suggests a huge improvement in the league, Ulster only managed one more point than the season previous, indicating it was more down to the failures of the Scarlets and Edinburgh for Ulster’s success. Benetton put up a tough fight but were probably never more than outside bets for a second place finish.

Ulster were fourth seeds in their group however as it panned out were the second best side. Scarlets were a shadow of the title winning side, while the Tigers are in turmoil. Racing showed glimpses of what they could do and were comfortable group winners and deservedly so.

Ulster Rugby used 50 players in their squad last season. As we have done on previous seasons we have a look at the origin of these players to see how the transition from age grade club rugby and Ulster schools rugby is meeting the demand of the professional game.

Unfortunately for the local youngsters it’s a continuing trend of reduced time on the pitch with the minutes played by Ulster origin players dropping by nearly 3% to 40% of total minutes played despite a 56% representation of bodies in the squad.

This gives nothing more than an indication of our internal sustainability (or our growth from the grass roots up if you like). We are delighted to have, and welcome, every one of our players.

It’s no surprise to see Stuart McCloskey play the most minutes for Ulster this season. Overlooked by Joe Schmidt for the Autumn Internationals and World Cup, he only missed two matches against Leinster, the humiliation in Thomond Park and the away defeat in the league to the Scarlets.

Fifteen players clocked more than 1,000 minutes however, unsurprisingly, Iain Henderson was the only regular Irish international player to do so. Five players, McCloskey, Billy Burns, Kieran Treadwell, Nick Timoney and Marcell Coetzee played at least 60% of the minutes available while Treadwell made the most appearances with 28.

It’s unsurprising to see that none of Ulster’s Irish front liners break into the top ten for minutes played. Jordi Murphy has found himself on the fringes of the Irish team since his move up north but he leads the way with 1401 minutes. Iain Henderson isn’t far outside the top ten on 1102 minutes while Jacob Stockdale only played 858 minutes in an Ulster jersey compared to his 1381 last season. Rory Best featured more in the white jersey (731) compared to last season’s total of 524.

Charles Piutau was Ulster’s front runner for metres made last season, chalking up a grand total of 1700. His departure to Bristol left a void which Ulster have struggled to fill. Stuart McCloskey made the most metres for Ulster with 1184 – a long way off the exploits of the former Blues man last season.

The lack of minutes in an Ulster jersey for Stockdale hampered his impact making just 724m but averaging 7.24m per carry, a similar result to last season. Hopefully with Matt Faddes on the way and a fully fit duo of Will Addison and Craig Gilroy, Ulster will improve in this aspect and therefore create more try scoring opportunities next season.

Despite only playing six matches, Craig Gilroy showed his value to the side by making the top ten for metres run. Similarly, Rob Lyttle dazzled in an Ulster jersey, contributing three tries in the second half of the season.

Gilroy has shown in past seasons that he can fill the void of Piutau having recorded over 2000 running metres in 2015-2016, scoring 12 tries in the process. His absence this season possibly went under the radar for most with the emergence of Robert Baloucoune and Angus Kernohan, but he continues to show that he is a valuable player by ranking highly on the attacking statistics.

As previously mentioned, Ulster scored two tries less than last season even though they played two more games. A useful rolling maul sees Rob Herring top the table with eight tries scored with Dave Shanahan and Jacob Stockdale coming in second with seven apiece. Only one of Stockdale’s tries came in the league (Connacht at home) with the remaining six coming in the group stages of Europe.

Marcus Rea and Jonny Stewart are the only players to average a try in less than 80 minutes but both have a combined total of under 250 minutes played. Jacob Stockdale comes in third with a 122.6 average and Rob Herring fourth with 140.1 strike rate.

Ulster made over 850 more tackles more this season than last season despite averaging 52% of possession of the ball. Taking into account that Ulster played two more matches, they still averaged 147 tackles per game compared to 126 per game last season.

It’s unsurprising to see Nick Timoney top the leaderboard considering the amount of work he gets through during the match. He also had the best completion rate for players who made over 50 tackles, closely followed by Rob Herring.

The quarter final against Leinster contributed massively to the rise with Ulster putting in a staggering 251 tackles. That night 14 players got into double figures while Herring, Jordi Murphy, Timoney and Iain Henderson made over 20 each.

Ulster have also seen a rise in turnovers, recording 189 compared to 158 last season. Marcell Coetzee was the main contributor with 23 followed by Stuart McCloskey, Rob Baloucoune and Jordi Murphy.

The European escapades of this season has been enough to sweep several disappointing results under the carpet. Suffering their heaviest defeat in the pro era against Munster was a sore point and one that the coaches and players got seriously wrong. The week after saw Connacht end their 59 year winless run at Kingspan/Ravenhill in a very patchy, ill-disciplined performance.

Ulster have shown countless times, including this season, that they can front up and put in a performance in Europe, but tail off against the ‘so-called’ weaker sides in the domestic league. Dan McFarland’s men need to become more consistent if they are to challenge the Europe’s elite for the top honours.

The FRU Player of the Season

Stuart McCloskey stepped up to the mark for the second season running. The inside centre was Ulster top ball carrier, top offloader, beat the most defenders and recorded the most metres run. Some would argue that he is unlucky to miss out on the Irish pre-season squad however he has certainly one of Ulster’s most important players. Some argue that he’s unlucky not be involved in this Irish training camp however I think he’ll be involved at a later stage. 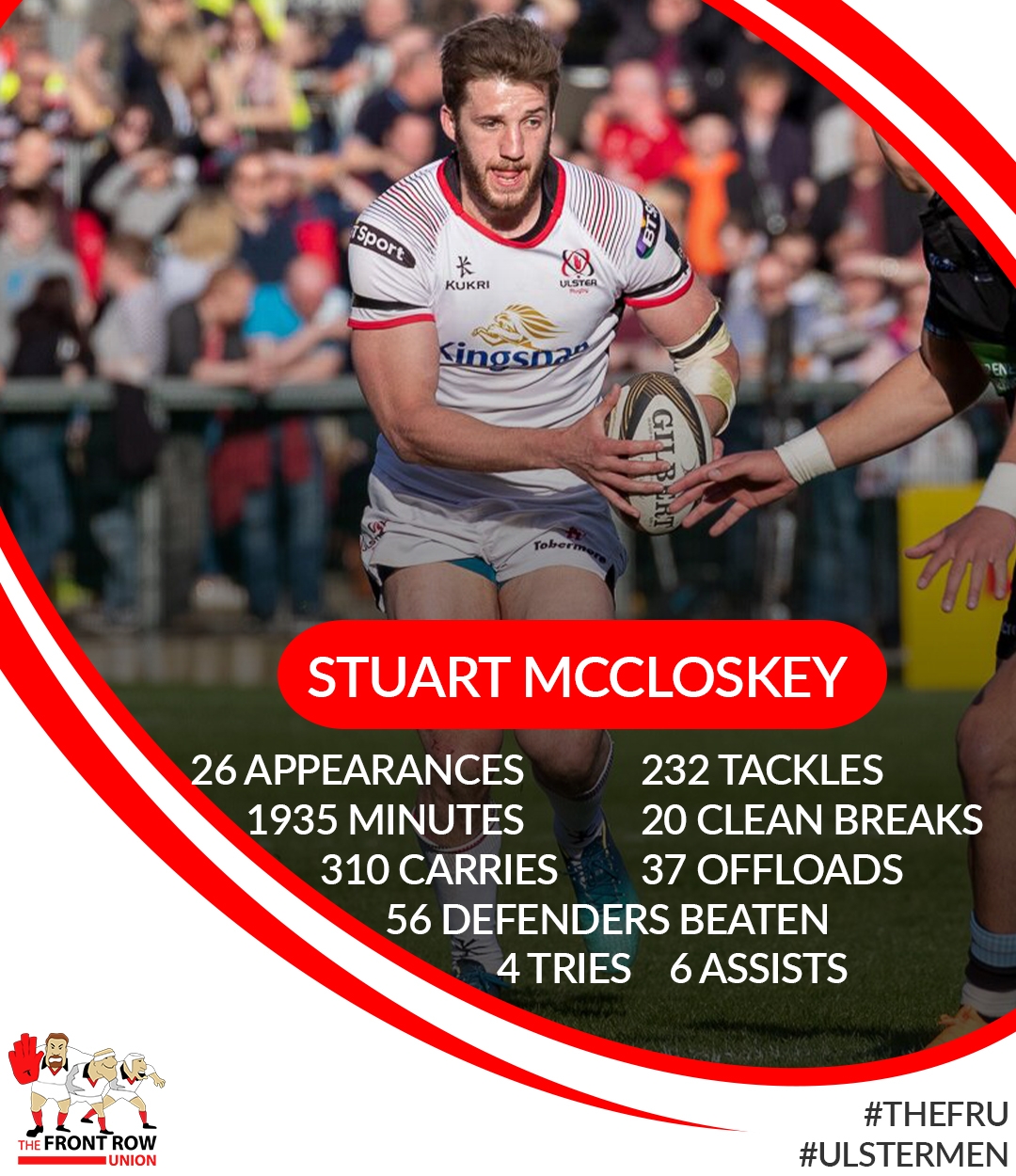 Not many people had heard of Eric O’Sullivan before the start of the season. The Dublin-born prop joined Ulster’s academy two seasons ago before being catapulted into the starting team this season. He’s been ever-present this season, making 26 appearances out of a possible 30. O’Sullivan has been solid in the scrum as well as in the loose where he is often used as a dummy carrier. His ability to pop the ball before contact gave Ulster another edge this season and created space for his team mates however I suspect opposition will have a look at this ahead of next season. 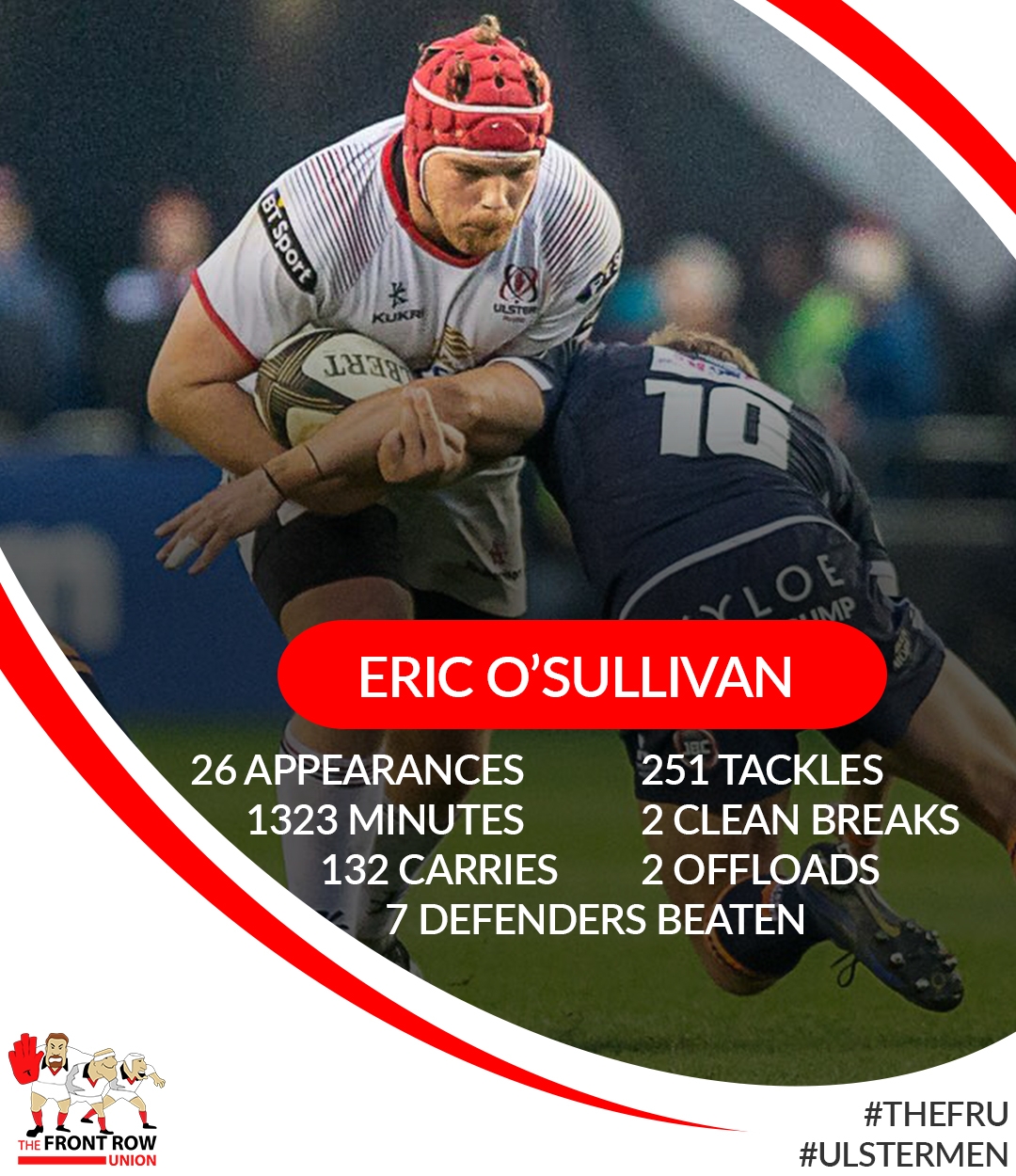 However, the FRU player of the season goes to Marcell Coetzee. Ulster supporters were finally able to see what the burly Springbok can do and he certainly won games on his own. Coetzee’s ball carrying was magnificent, beating 47 defenders while his offloads added another dimension to Ulster’s attack. His performances have seen him catapulted into the South African World Cup warm up squad. I’m not one for comparing players, but Coetzee is the closest Ulster have had to an enforcer since the retirement of Stephen Ferris. 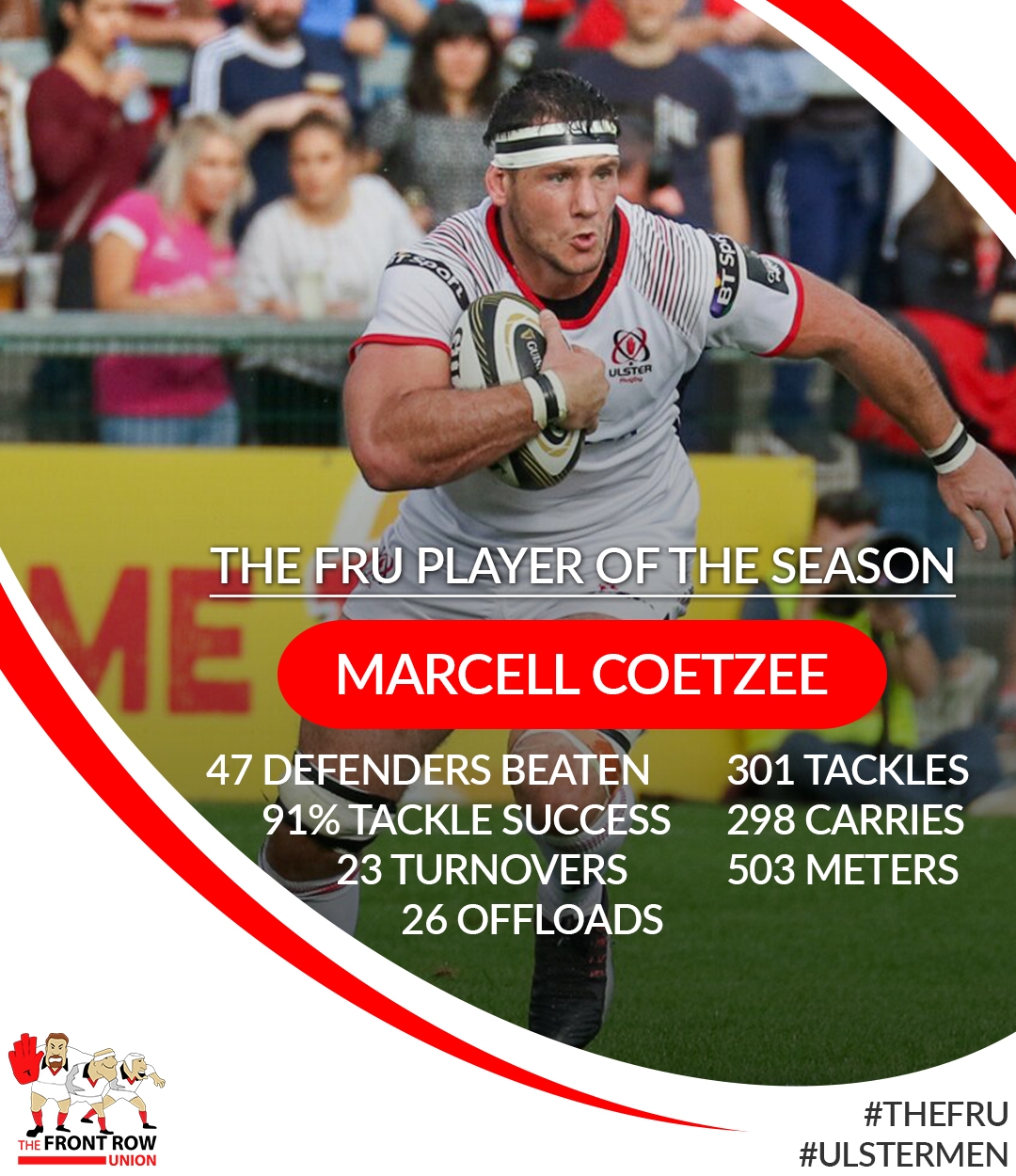 Here’s to the future…

Knockout rugby certainly brought a feel-good factor back to Kingspan for parts of this season however there’s still a lot of work to be done. As previously mentioned, Ulster rolled over a few times this season which is not the mark of a trophy winning side.

I’d like to see Ulster become more clinical in the opposition half. McFarland’s men only recorded two bonus point wins in the league from September to the end of February. There were a few dropped chances, namely against South African opposition as well as Edinburgh and Cardiff. The outlook did improve after the Dragons’ match with bonus point victories against Edinburgh, Kings and Dragons.

Rolling maul to become a weapon. Hopefully the acquisition of Sam Carter will take a decent rolling maul to the next level for Ulster. The Brumbies benefited hugely from it with hooker Folau Fainga’a recording 11 tries this season, second only to Sevu Reece in Super Rugby 2019.

And lastly, more leaders. Ulster’s international stars will be unavailable for large parts of the season due to World Cup and Six Nations duty. Since the retirement of Johann Muller, Ulster haven’t had a leader who takes to the field in a white jersey consistently. Hopefully incoming Carter will provide stability, along with Rob Herring, Alan O’Connor, Will Addison and Stuart McCloskey.