There was a full set of fixtures completed this weekend. Despite losing, I’m sure Cooke and Suttonians will be glad to have gotten a hit out.

Blackrock were this week’s stars with a big win against second placed Railway Union. The rest of the games went pretty much as predicted.

This leaves the standings as follows. 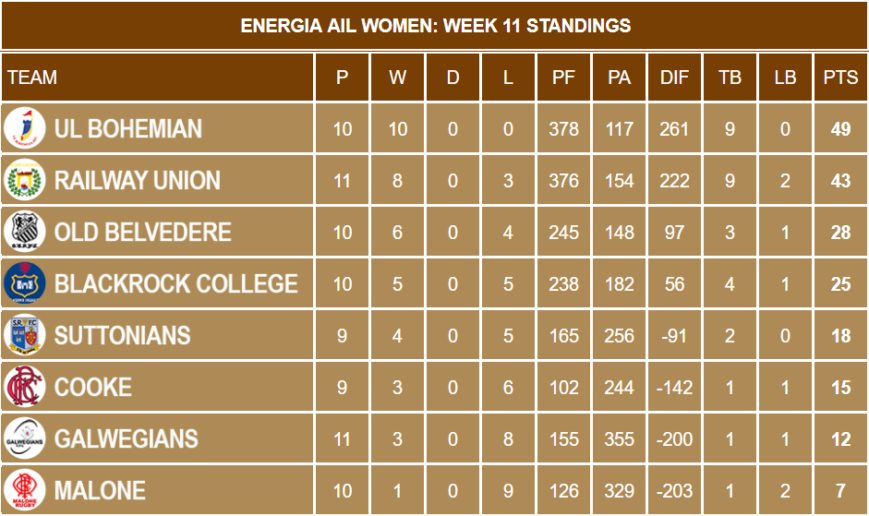 There is still a bit of sorting out to be done when the re-fixed matches are completed. The re-fix games will start after Week 12 – which goes ahead as normal this weekend.

With three of the four matches taking place in Belfast we should be able to bring you plenty of coverage.

While there hasn’t been much movement in the overall standings, there has been quite a bit of activity on our scorers tables.

It was a comparitively low scoring week with 129 points scored over the four games. The points came from 20 tries, 10 conversions (50% conversion rate) and three penalties.

Hannah O’Connor was this week’s leading scorer, scoring all of Blackrock’s 16 points against Railway  from 1 try, 1 conversion and 3 penalties.

Despite O’Connor’s impressive haul, Stephanie Carroll has managed to hold on to top spot by virtue of her try for Railway Union in the same game.

Carroll’s try at the weekend has also kept her well clear at the top of the leading try scorers table, where this week’s big mover is UL Bohemian’s Quin whose two tries against Suttonians has enabled her to leapfrog a plethora of players on 6 tries for the season.

Quin’s next target will be to chase down teammate Chloe Pearse, who led this table for so long until Carroll hit her free scoring burst in recent weeks. 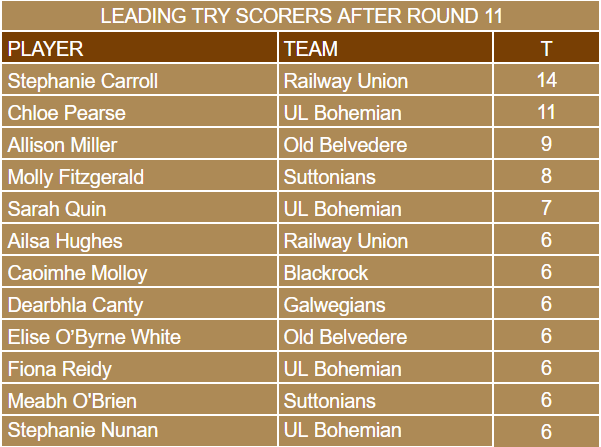 We’ll update the Players Player nominations after the refixed games have been completed.

There is one amendment to this week’s totals with Malone’s Alexa Grudgings now correctly credited with 3 conversions against Suttonians way back in Week 5. These had previously been credited under the wrong name.

You can view all the teams individual scorer stats in the drop down below.  Give us a shout if the are any mistakes.