UCC manager Brett Campbell lamented that starting from -5 points the only way was up for his squad and they have worked their way to mid table with three games in hand and more than double the points of, today’s competitors, Holywood who are floating just above the bottom club NICS.

The match begins with from the thunderous boot of out half Jordy De’Pledge, whose bother Joel joins him in the backs at 13, but this rush into UUC territory is short lived.

Pushed back into their own half there is a knock on from Holywood and we get our first view of the scrum. What a surge from the UUC as Holywood are driven yards back, the front row pops up and the penalty is awarded. Touch is missed but play breaks down again as Holywood attempt to exit and we have a repeat scrum almost in the same place as seconds before.

The UCC scrum put in a powerful performance.

Holywood put in, but it’s no advantage as the pack again is shoved off the ball and UUC have another penalty. Touch found and the line out won, UUC use their backs and almost get their left wing over in the corner as Holywood defend the attack. Close quarter quick phases then the ball is spun out to UUC out half, Adam Johnston, who slips the tackle and touches down under the posts. Simple conversion for Johnston and it’s 7-0 after 14 minutes. 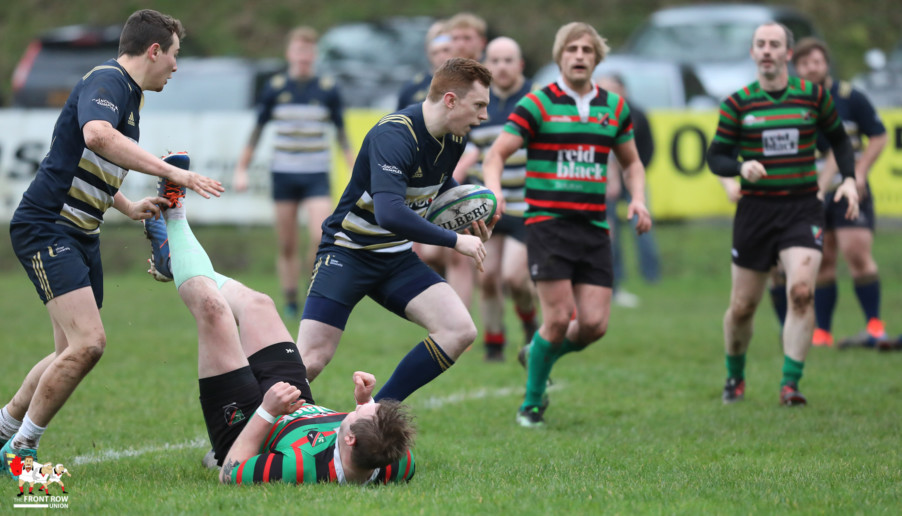 UCC head for the line for the opening score.

It’s looks like it will be be a tough afternoon for the North Down lads as UUC keep piling on the pressure, frequently from UCC’s hooker Martin O’Neil, but to their credit Holywood do not buckle and stoutly defend their line for long periods keeping UUC out.

In particular Holywood’s scrum half, Harry Eves, catches the eye with some darting runs and steps to get his team out of trouble and some precious territory and eventually on a rare incursion into the opposition’s half they win a penalty with the big boot of Jordy De’Pledge converting. 7-3 on 33 minutes.

Eves is really beginning to trouble UUC and from an attacking line out is almost over but is held up as he crosses the line. The 5m scrum is a foregone conclusion and UUC clear their line. Whistle blown and it’s 7-3 at half time. 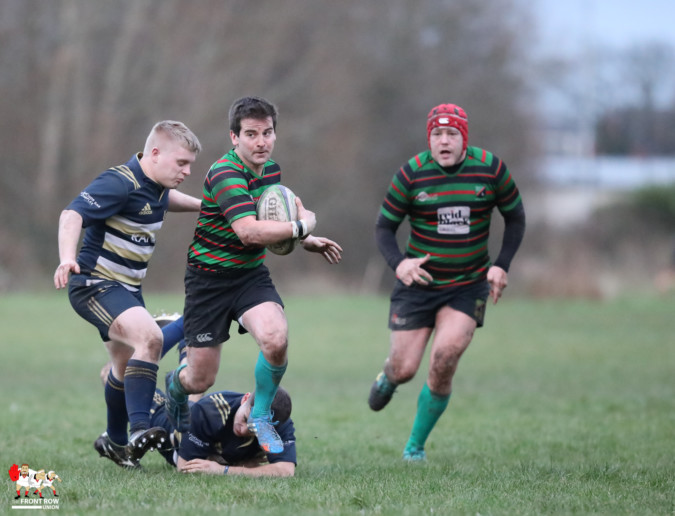 UUC restart the match and immediately win a penalty which Johnston converts to put the gap back to 7 points. Their dominance in the scrum is telling and another penalty sees another 3 points added 16 minutes into the second period.

Finally after another scrum penalty the ref shows the yellow and this would give UUC the space to get their second try and they use their numerical advantage to send winger Ryan Jackson over. A superb conversion from the touch line sees the score now at 20-3.

Holywood could have capitulated at this stage but instead we witness a surge of play and their use their big 13 Joel De’Pledge to bust holes in the UUC line. From this loose play Holywood look dangerous and Eves manufactures a fabulous individual try rounding and stepping three defenders to score in the corner. The conversion is good and Holywood are in double figures and look like they might give the students a nervous final 15 minutes.

UUC’s hooker, and best ball carrier, O’Neil has other ideas and makes a surging run up field supported by inside centre Dave Gilkinson, only to be stopped just before the try line but Holywood knock the ball forward in the ruck. UUC have a scrum 5 m out and it’s no shock they walk the ball over the line before their big eight, Jack Kilgore, falls on the ball for the third try, converted.

The match is done and the final score remains at 27-10.

A very competitive game played in great spirit. The Front Row Union MotM fittingly goes to UUC hooker Martin O’Neil for his excellent performance both in the set piece and effectiveness in open play. 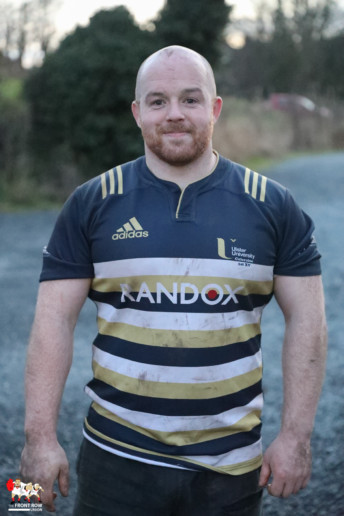 Watch the short videos with both captains to hear their view on the game: