We’re running behind this week so it’s a quick wrap of Week 8 in the Women’s AIL and we’ll get our preview of Week 9 up tomorrow. I’m sure Railway and Bohs are dying to know who’s going to win. 😯

The results from Week 8 are as follows.

Congratulations to Malone and Suttonians on reversing the results against Galwegians and Blackrock from the previous weekend and good to see Malone finally get that big W against their name.

In the other matches UL Bohemians and Railway Union consolidated the top two spots with bonus point wins against Old Belvedere and Cooke.

All this leaves the league as follows. 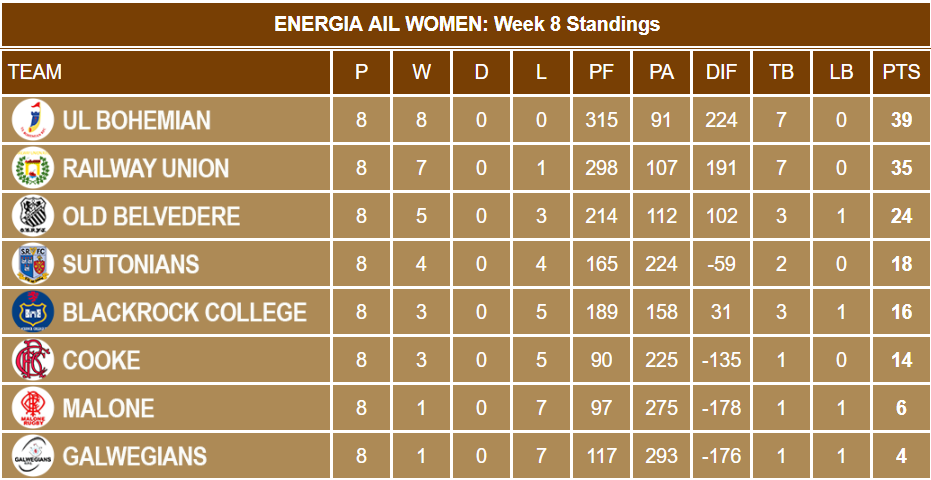 The league returned after it’s seasonal break with 181 points scored. The points came from 31 tries and 13 conversions giving a conversion rate of 42%.

Railway Union’s Stephanie Carroll was the leading scorer for the weekend with 20 points from 4 tries. There were three players on 10 points from a brace, Railway’s Cliodnha O’Connor, Cooke’s Emma Kearney and Suttonians’ Molly Fitzgerald.

Belvo’s Jemma Jackson was next with 9 points from a try and 2 conversions followed by Nikki Caughey on 8 from 4 conversions.

Carroll and Fitzgerald move into equal third in the leading scorers table as the challengers begin to stack up behind O’Connor and Pearse, Jackson and Galwegians Nicole Fowley sneak up a few spots into equal fourth.

Looking at the leading try scorers on their own we have. 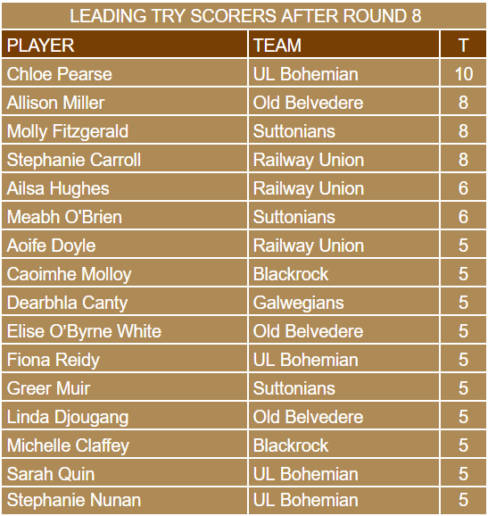 The nominations for Week 8 are as follows.

Congratulations to all players nominated. Stephanie Carroll and Ella Durkan pick up their second nominations of the season to join a group of 14 players all on two each.

However, there is no change to top spot with the “golden trio” still battling it out.