You are at:Home»Club»Club Women»Energia AIL Women: Who’s been doing what.

Alison Miller is hot on the heels of Chloe Pearse at the top of the Try Scorers table.
Club Women

By Editor on December 24, 2019 0 Comments
Alison Miller is hot on the heels of Chloe Pearse at the top of the Try Scorers table.
CLUB WOMEN ADVERTS

What better way to spend Christmas Eve than to catch up with all our favourites in the Women’s All Ireland League.

Energia AIL 1B Results and Standings.

Week 7 was the midway point for the league, but, despite the league being half way over it looks like we haven’t learn’t anything as we had a particularly bad set of predictions in our preview way back at the start of December.

The effect on the league is that a resurgent Blackrock College move back into the top four, leapfrogging Suttonians and Cooke, and Galwegians get off the bottom of the table with Malone taking their place.

Also of note is that UL Bohemian dropped their first match point this season, the D4 Dutchesses being the first side to deny the Mean Red Machine a bonus try bonus point. 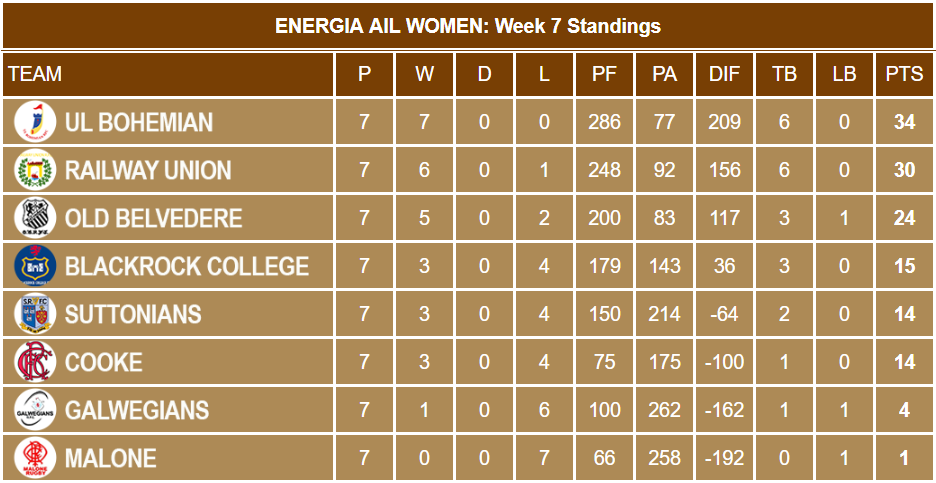 Unsurprisingly, UL Bohemian remain the form team over the last three and the last five games and they are also No 1 in our book after their bobble hat donation to our freezing photographer fund. 😯 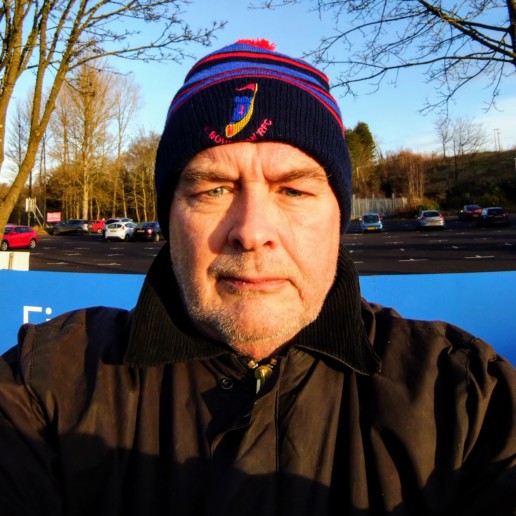 Note – other hats will be worn as and when provided. 😆

Just below Bohs we have Railway Union, Suttonians, Blackrock and Old Belvedere squabbling it out for second place on form, each with two wins from the last three. Railway are currently in second place by virtue of their superior form over the last five rounds.

At the bottom of the form table Galwegians will be happy they have got out of the minus figures following their conceded match in Week 4 and they can reward their efforts with some festive fun over the holiday period.

In contrast, it should be a plum duff and drink free holiday season for the players at Malone and Cooke with all the extra training they are going to do to get their seasons back on track, both teams showing no wins over their last three.

However having looked at some recent social media posts it may be already too late for such measures! 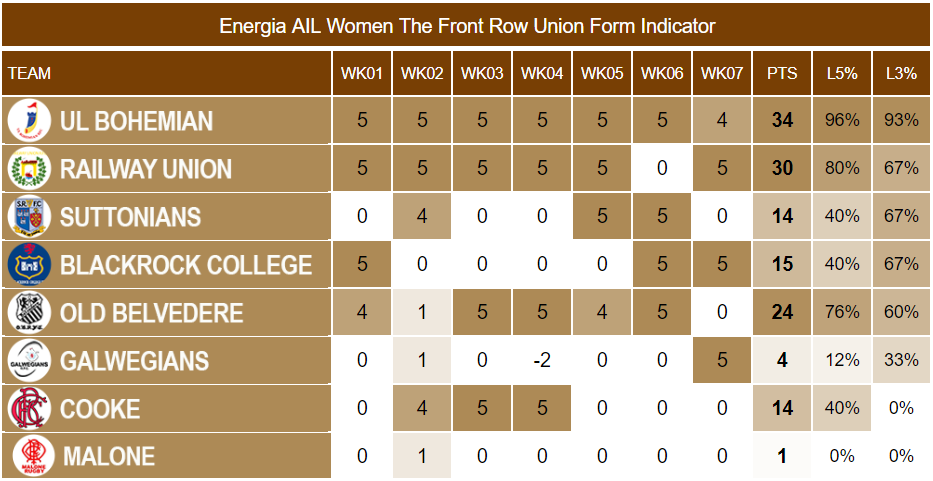 We’ll review the current form in more detail when we do our Week 8 preview. 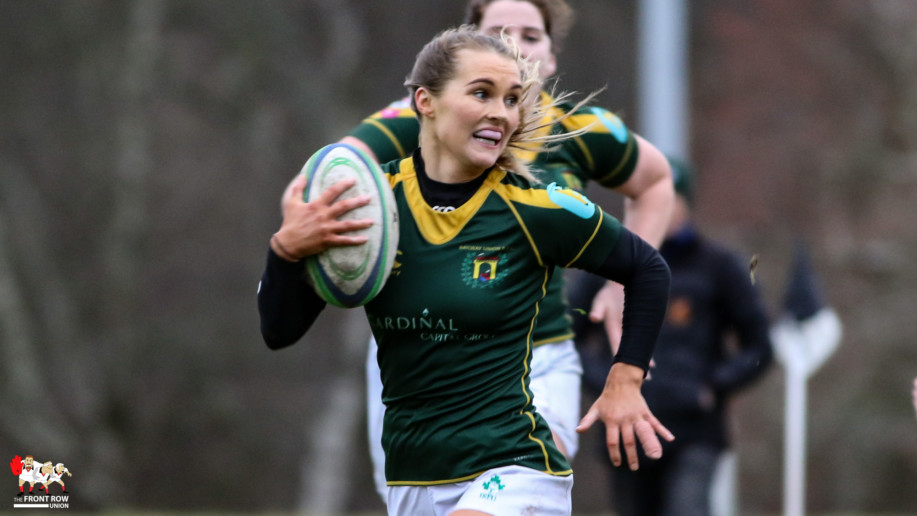 Railway Union’s Aoife Doyle picked up the most points in Week 7.

Aoife Doyle (Railway Union) was the leading scorer for the week with 15 points from three tries with teammate Larissa Muldoon a few points behind on 12 from 6 conversions.

Hannah O’Connor (Blackrock) maintained her top spot in the Leading Scorers Table with an 11 point haul from 1 try and 3 conversions and Michelle Claffey (Blackrock) and Clara Cooney (Railway Union) both picked up 10 points, each scoring a brace. 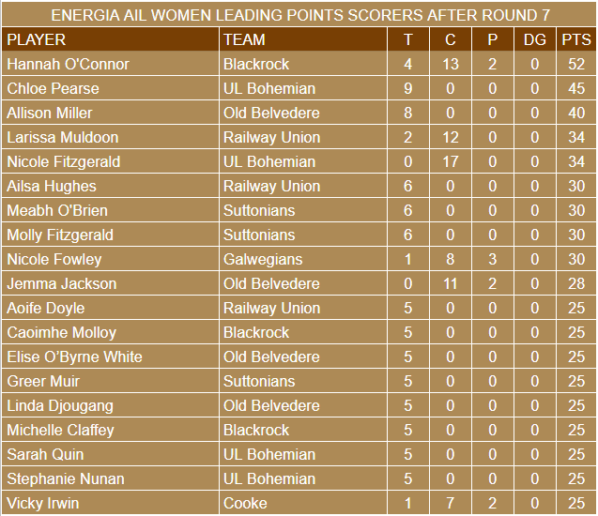 We’ve broken out the individual try scorers from the above table this week and Chloe Pearse (UL Bohemian) is facing a formidable challenge from Alison Miller with both players averaging more than a try a game.

Honorable mention to three players on 6 tries each, Ailsa Hughes (Railway Union), who always seems to get a score when The FRU cameras are there, and Suttonians’ duo Meabh O’Brien and Molly Fitzgerald who have adapted quickly to the AIL.

It would be remiss of me not to mention the remarkable UL Bohemian pack  that has dominated the league and clocked up 30 tries between them this season, 15 from the front row alone! You would wonder what you would have to do to attract the attention of the Ireland selectors these days? 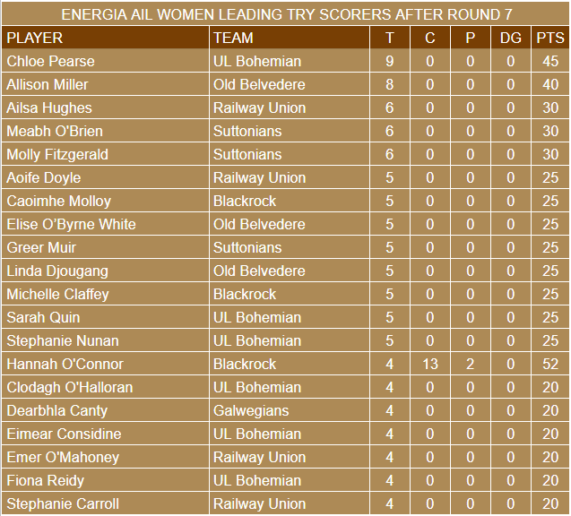 You can view all the scorers from each team below, just click on the team names. 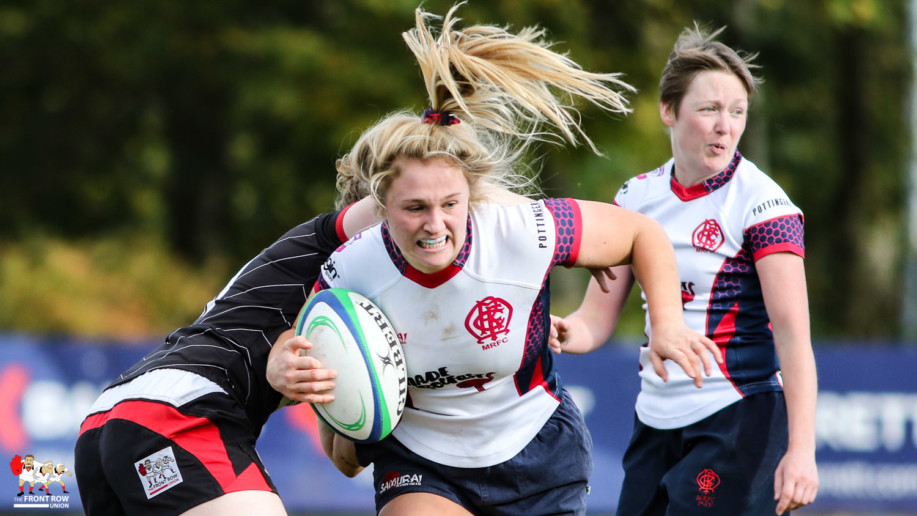 To date here have been 36 different players nominated by their opponents, all the players nominated are shown below. Note there have only been a total of six nominations for Cooke and Galwegians due to their match being forfeited.

Leading try scorers Allison Miller and Chloe Pearse are joined by Malone’s Neve Jones at the top of the Player’s Player table with three nominations each.

Congratulations to all players who have been recognised by their peers.