Who will come out top in this weeks tussles?
All Ireland League 1A

By Editor on December 5, 2019 0 Comments
Who will come out top in this weeks tussles?
CLUB MEN ADVERTS
JOIN US

We didn’t get our predictions in last week, hopefully we’ll keep on top of it going forward. We’ve included Week 8 match predictions at the end of this piece.

The results in the Energia AIL 1A for last weekend are as follows.

Cork Constitution remain undefeated following their home five pointer against Ballynahinch. Garryowen and UCD continue to chase, both on a run of “at least” three wins on the trot.

The results leave the league standings as follows. 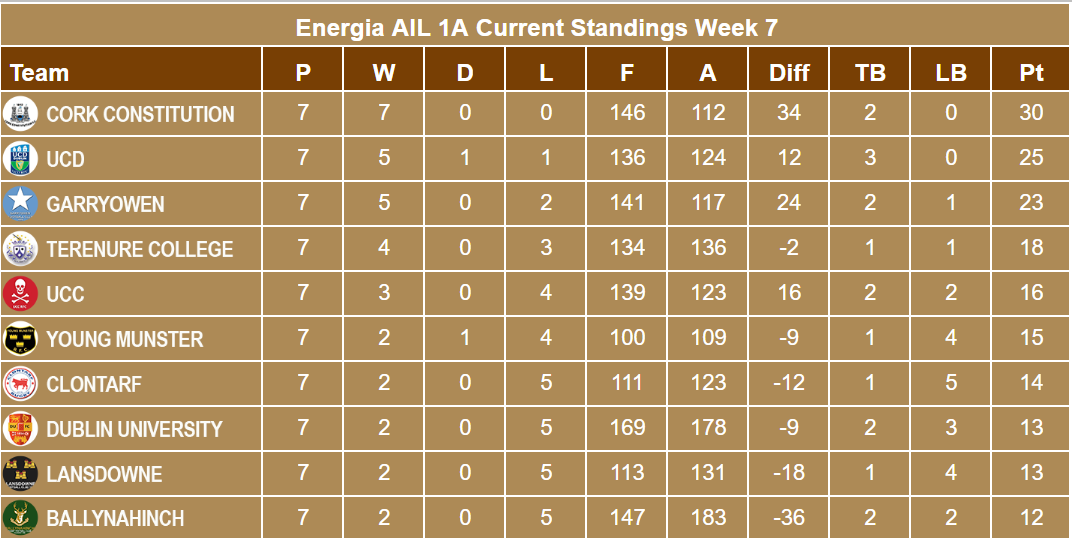 Both Young Munster and Lansdowne took full advantage of Hinch’s defeat to leapfrog the Ulster side at the bottom of the table, following wins against Dublin University and Clontarf respectively. Young Munster soaring up to sixth after their second win on the bounce.

There were 223 points scored in Week 7, the second highest total to date. The points came from 28 tries, 25 conversions (a commendable 89% conversion rate) and 11 penalties.

Cork Constitution duo Jack Crowley and Rob Jerymn were this weeks leading scorers, both bagging fifteen points, Crowley from a try and 5 conversions, Jermyn from 3 tries. 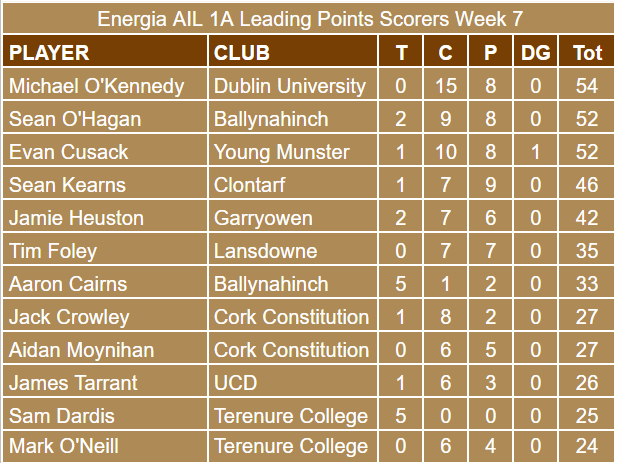 Only Crowley and Kearns feature in the leading scorers table which sees Dublin University’s Michael O’Kennedy hold on to a slender lead over Sean O’Hagan (Ballynahinch) and Evan Cusack (Young Munster).

The fixtures for this coming weekend are as follows.

The current form for the teams taking part, based on their last 3 and 5 matches is as follows. 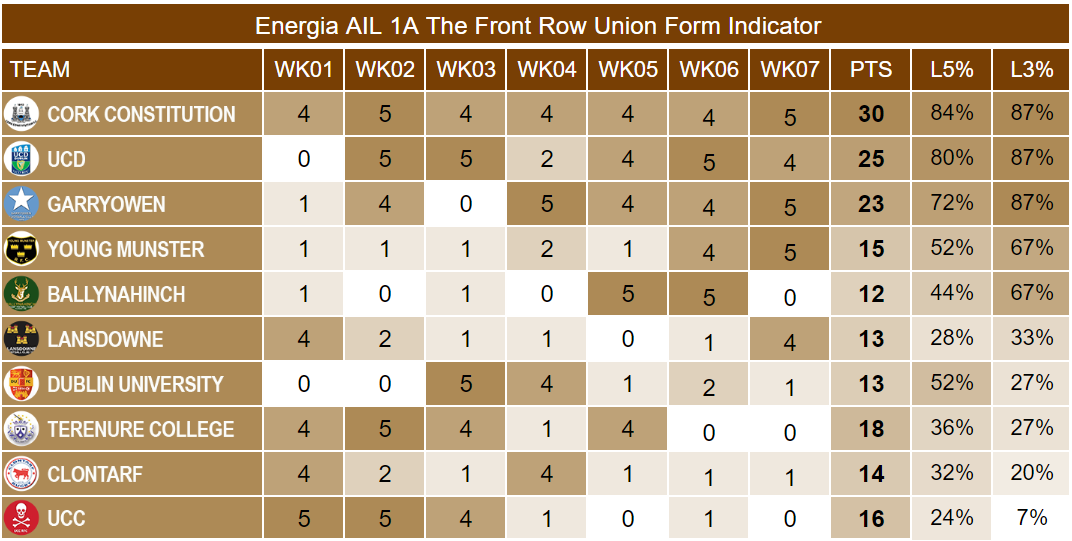 A tight one predicted here with both sides showing mid table form over recent weeks, picking up 2/3 of their available points in their last three matches.

Young Munster have been the most consistent team of the two, the main difference being that they have managed to swap narrow losses for narrow wins over their last couple of matches. Hinch on the other hand had been hitting big losses but had responded in recent weeks with big wins until they were tuned over by league leaders Cork Con last weekend.

It’s the tightest defence in the league away to the second highest scorers.  I think home advantage will count to give Hinch the win though Young Munster will get something out of the game.

The top two teams in the league go head to head at Temple Hill and there is nothing between them on recent form. Cork Con have a very slight advantage on extended form and over the season they have scored 10 more points and conceded 12 less.

However, I’ll cover my ass here and say that UCD and an inform Jack Ringrose might be the team to halt their hosts impressive run.

Another fairy close one according to the stats, however, this one features two sides who will be keen to shake disappointing runs of form.

Over the season there is only a point between the two sides. On the scoreboard the home team have scored almost 60 points more, but have also conceded a similar amount more.

We’ll go with the slightly better stats and home advantage to predict a win for Dublin University.

One of the top form sides against the side on the worst run only points in one direction and that’s a big win for Garryowen.

UCC desperately need to rediscover the form that saw them top of the table after the first three rounds.

We’ll stick with current form stats for this one and predict that Lansdowne build on their recovery after a bit of a free fall a few weeks back.