You are at:Home»Club»Club Men»Club Men: Energia AIL 1B Week 4 Wrap

It was something of an Ulster club revival in Week 4 of the Energia AIL 1B with all three of the provinces participants recording a win.

City of Armagh continue to lead the way with the Orchard County boys recovering from last weeks defeat with a win at Navan.

At the top of the table, newly promoted Highfield maintain their unbeaten run with a win at St Mary’s while Old Wesley, who also have won four from four, keep the pressure on in second place following a narrow win across the road at Old Belvedere.

Belvo’s loss and Armagh’s win see the Ulster club move back to third place and Malone continue their upward trajectory, moving one place to 6th.

Bann’s win allows them to leapfrog Naas and Navan as they soar up the table to 8th. 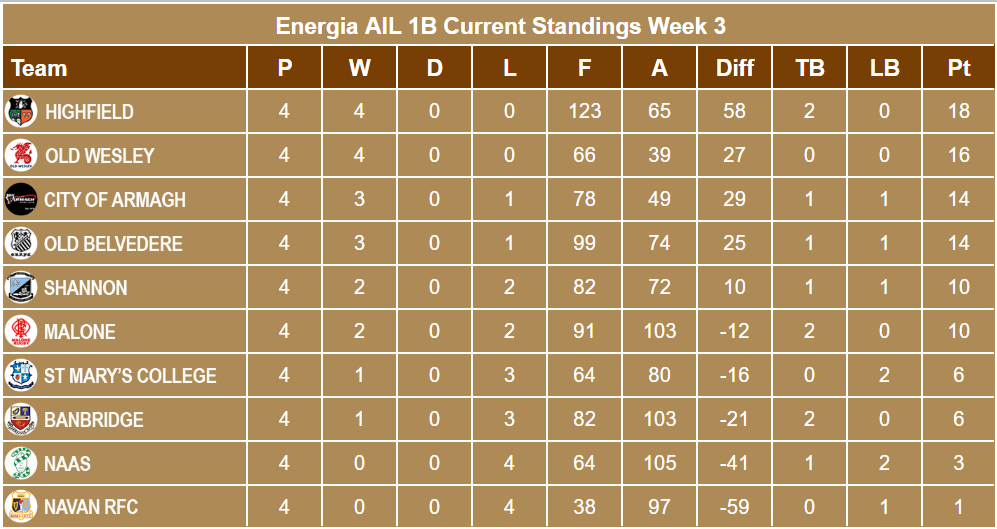 This weekend has thrown up an interesting set of fixtures as the winning teams from from the previous week face the losing teams.

At the top of the table Highfield welcome fourth placed Old Belvedere with Belvo looking to get back on track after their agonising one point defeat to Old Wesley last week. Nothings ruffled Highfield yet but we are expecting a close one what should be a high scoring encounter.

Second placed Old Wesley will be looking to keep the pressure on at the top of the table with a win against bottom placed Navan at Energia Park.

Third placed City of Armagh will be expecting to build on their form on the road, where they have picked up two from two, when they make their trip to face Shannon. However the Limerick side will be looking to bounce back after their surprisingly big loss at Banbridge last week.

Malone look to be hitting some form over the last couple of rounds and they will expected to continue their run against St Mary’s who have lost three on the bounce.

In the final match Banbridge will be preparing to add to last week’s win when they welcome Naas to Rifle Park. Neither side has shown their form from last season so it could be a gritty old battle as both look to move away from the bottom of the table.

There were 180 points scored last week, the second lowest total this season.

Callum Reid (Banbridge) was Week 4’s leading scorer with 14 points coming from a try, 3 conversions and a penalty. Peter Osborne (Naas) and Cormac Fox (Armagh) were next on the list with 12 points each.

The leading try scorers were Peter Cooper (Malone) and Greg Jones (Banbridge) who each bagged a brace.

Leading points scorer Steve Crosbie (Old Belvedere) didn’t add to his total this week but he still holds a 15 point lead on the chasers. 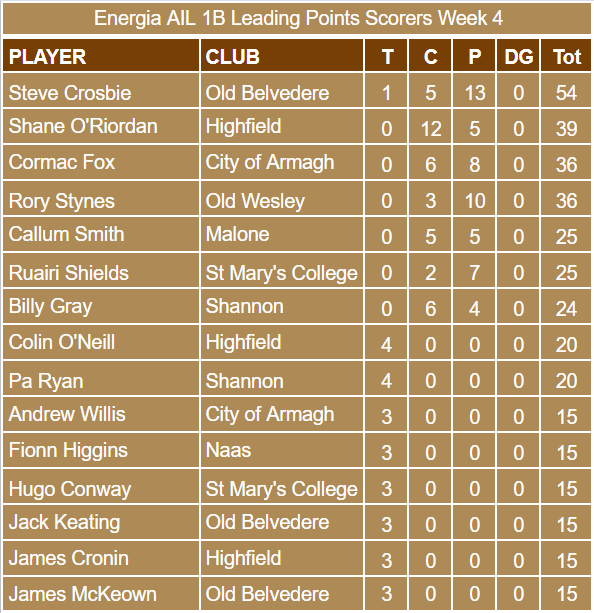