You are at:Home»Club»Club Men»Club Men: Energia AIL 1A Week 4 Wrap.

The Energia AIL 1A continued apace at the weekend. Unfortunately there was no change in fortune for our Ulster boys, with Ballynahinch losing out away to Garryowen.

Energia AIL 1A Results and Standings

There is now only one undefeated team in the league after Cork Constitution’s win, away to Terenure College, and UCC’s unbeaten record went at Clontarf .

Cork Con’s win sees them slip a couple of points clear at the top of the league and at the bottom Young Munster have put a bit of distance between themselves and Ballynahinch following the Limerick sides draw at UCD. 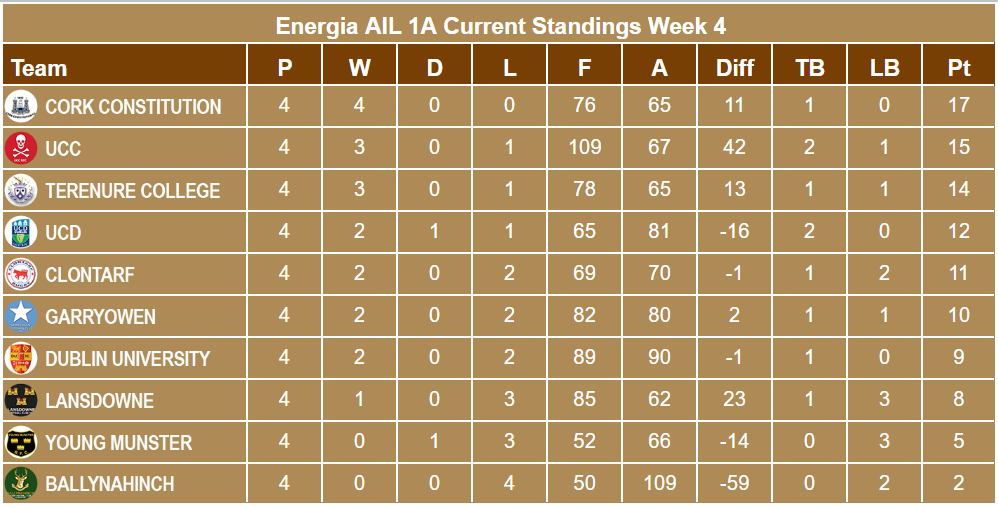 We’d suggested last week that Hinch’s matches against Garryowen (last week) and Lansdowne (this week) were opportunities to harvest some points.

Unfortunately, for the Ulster side, it didn’t work out on the road but they can still look at their game against Lansdowne as an opportunity to kick start their season.

We haven’t seen enough of either side to make a reasoned call but based on their respective league placings it’s a game that Hinch have to target for a win.

At the top of the table, Cork Con have the opportunity to extend their lead, on one of their main rivals at least, if they can overcome Dublin University at Temple Road. Constitution’s closest competitors, Terenure and UCC, meet at Lakelands Park.

However, we are plumping for UCD’s trip to a resurgent Clontarf as our tie of the round with both teams looking to add just a little bit more to their season to date.

It was the lowest scoring round in the Energia AIL 1A so far with 142 points scored.

In the leading scorers table, Lansdowne’s Tim Foley moves to the top of the table following Sean O’Hagan’s scoreless weekend and Young Munster’s Evan Cusack moves into the top four by virtue of this 9 point haul at UCD, a feat matched by his opposite number David Moran who moves up to 7th. 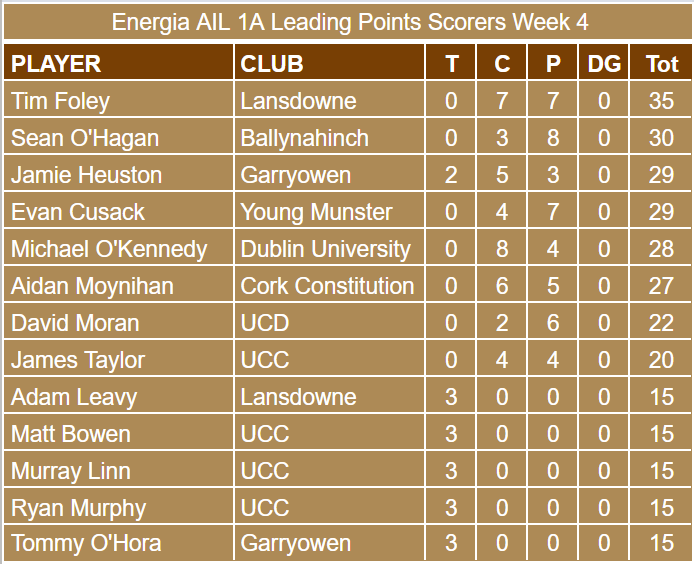