The women’s Energia AIL was competed at the weekend, despite clashing with an Ireland Women’s camp. Railway Union and Old Belvedere were able to keep their big guns by rearranging thier game to Thursday night .

The curse of the FRU’s recommendation, as pre-season favourites, has obviously hit Belvo hard with our favourite Aristo’s losing a close one at Park Avenue.

Even the thought of hinting that it might be Blackrock’s year, after their big win against Galwegians, saw the Stradbrook side lose to Boh’s and the league already has a familiar look with the Red Machine and the D4 Usurpers in first and second second place with a 100% record over the two rounds.

At the other end of the table it was good to see our new BFFs TRIBE pick up their first win in the AIL, at Crowley Park, their opponents Glawegians recovering somewhat from last weeks outing to pick up a losing bonus. Malone also got their account up and running with a losing bonus at Belfast rivals Cooke.

The results give the latest league standings as follows. 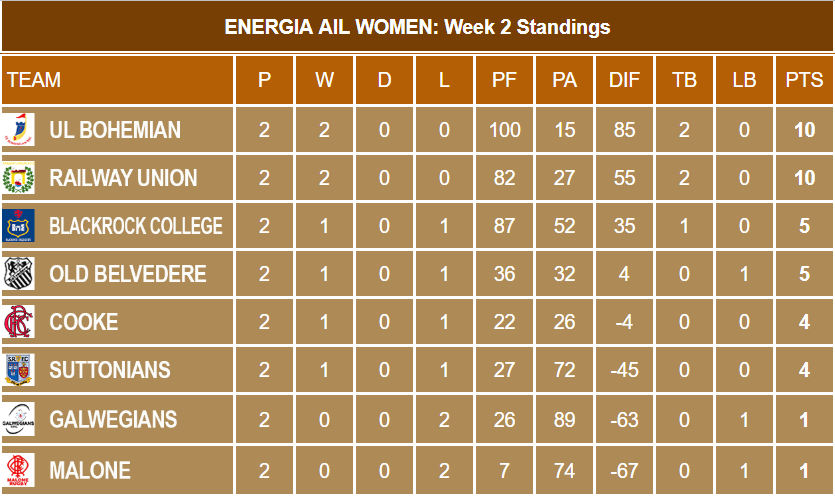 The week 2 points came from  24 tries and 10 conversions giving an overall conversion rate of 41% which is down a couple of % points from last week.

The leading scorer in Week 2 was UL Bohemian’s Sarah Quinn who scored 10 points through two tries.

Suttonians Maeve O’Brien moves into the top five after picking up her third try in two games.

All the scorers to date are shown below.

The players player nominated by their opposition for Week 2 are:

Well done to all.

The fixtures for the coming weekend are as follows.