Rumours that Scotland had scored twice before Ireland got out of their huddle may be exaggerated! Photo credit Adrian Henry: rugbypeople.net
Men Six Nations

By Editor on February 6, 2017 0 Comments
Rumours that Scotland had scored twice before Ireland got out of their huddle may be exaggerated! Photo credit Adrian Henry: rugbypeople.net
ADVERTS

Ireland went down 27 – 22 to a spirited Scottish side on Saturday afternoon at Murrayfield. A stirring second half comeback was not enough to overcome the Scot’s free scoring first half in which Stuart Hogg wreaked havoc in the Irish defence, scoring two tries.

Keith Earls, Iain Henderson and Paddy Jackson all crossed for Ireland but Scotland regrouped to seal the game in the closing minutes thanks to two Greig Laidlaw penalties.

The recent form of Scottish players in the PRO 12 and in Europe indicated that this was always going to be a difficult match and so it proved with Scotland storming out of the blocks to take a sluggish Ireland to task in the opening quarter.

Hogg crossed twice in a twelve minute burst, skipping outside Garry Ringrose for the first and turning Rob Kearney inside out for the second, Laidlaw converted both to give Scotland a 14- 0 lead at the start of the second quarter.

Ireland hit back fairly quickly and a period of pressure saw Earls go over in the corner, though Zebo’s looping pass could have easily saw Tommy Seymour intercept for a score at the other end of the pitch. However the ball slipped through Seymour’s hands and into Earls’ for the Munster man to score. Jackson missed the conversion from out wide.

A ridiculously easy line out double bluff saw Scotland grabbing their third try as Ireland ignored their front loaded line out only for Ross Ford to lob the ball to Alex Dunbar at two for the centre to practically fall over the line to score. A move that will no doubt be attempted in many schools match’s but it’s unlikely that the opponents will be as clueless as Ireland.

Laidlaw converted to make it 21- 5 at the half hour mark and Jackson responded with a penalty five minutes later, the teams going into the break with the hosts leading 21 – 8.

With Ireland only able to play one way, all Schmidt could ask was for them to work harder, and they certainly did after the break. But, boy oh boy it was exhausting just watching!. Ireland enjoyed over 80% possession and sent in wave after wave of muscular attacks for Henderson and then Jackson to score. Jackson converted both to give Ireland a one point lead at the start of the final quarter. 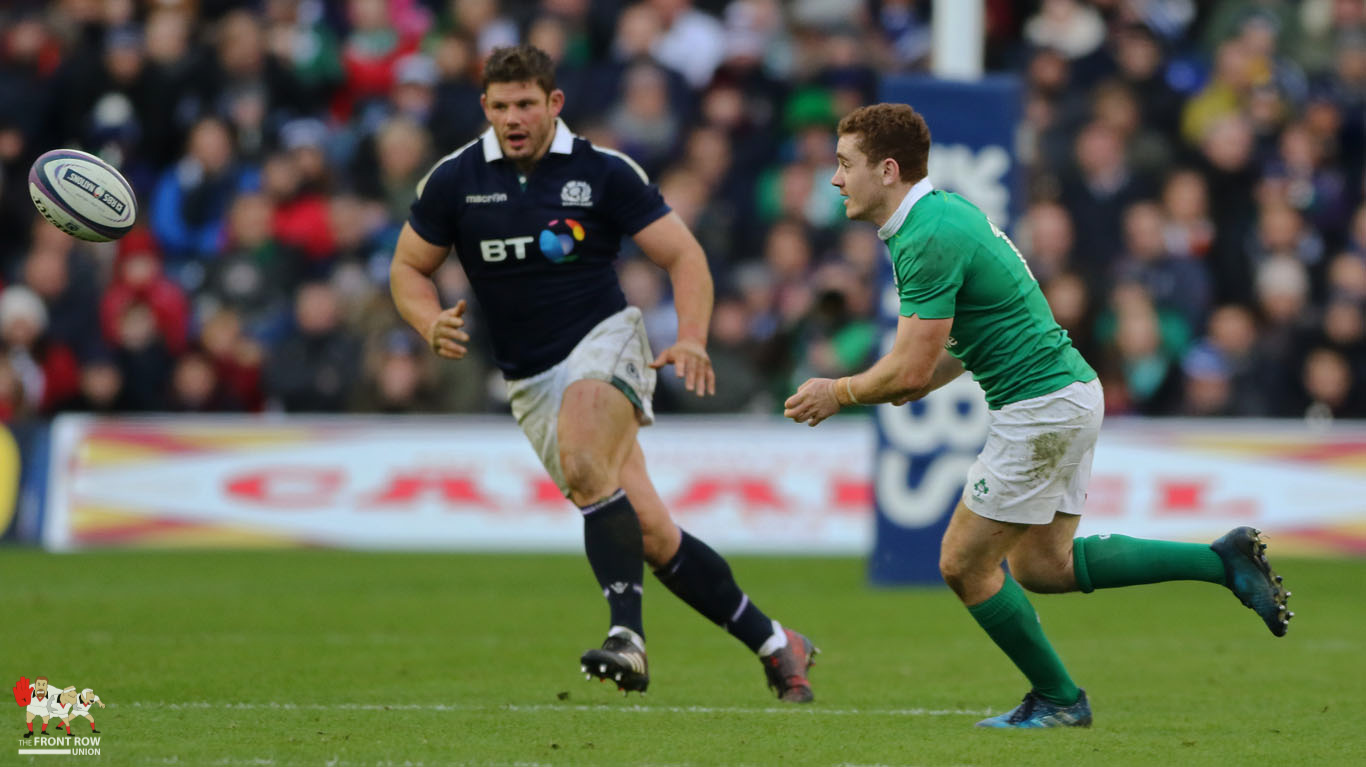 Paddy Jackson and Ian Henderson crossed for Ireland in the second half but it was too little too late. Picture credit Adrian Henry: rugbypeople.net

However, Ireland had shot their load. This was a more street savvy Scotland and they soaked up the pressure and marched back up field to take the game from two well engineered penalty attempts.