You are at:Home»Features»Feature: Your Prize is Merely Resting 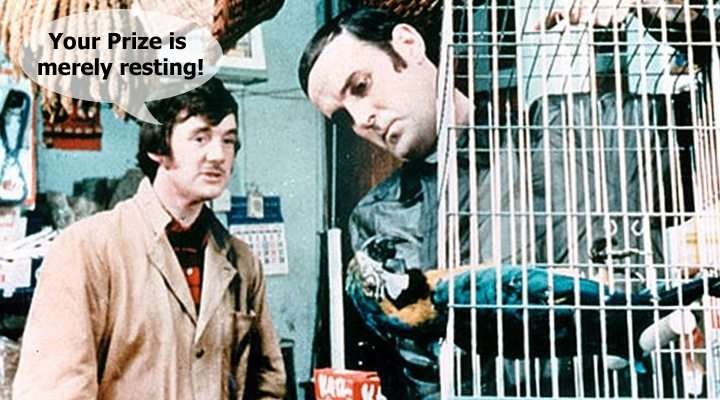 With apologies to Monty Python!
Features

Feature: Your Prize is Merely Resting

By Editor on December 11, 2013 1 Comment
With apologies to Monty Python!
ADVERTS
PRINTS 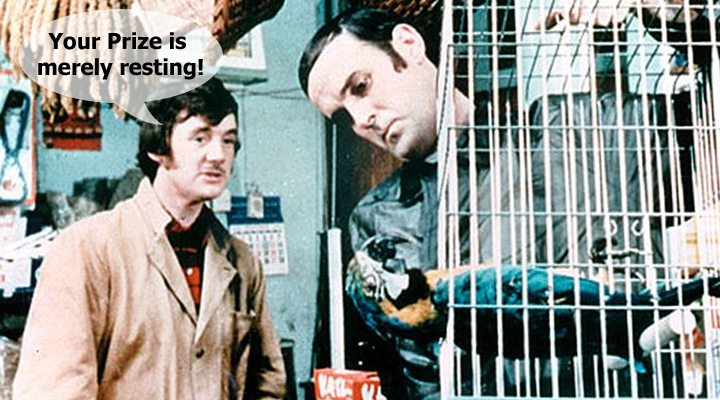 With apologies to Monty Python!

When the time comes around for awarding the main prize at the end of the season for the Predictions League winner I try and think of a special prize for the winner, particularly if they have already won some FRU Gear. Maybe a couple of tickets for an Irish International or a signed shirt – something they don’t already have and something they can use.

Unfortunately, time drags on as I try to source a suitably special prize, busy man and all that, but I received this poignant reminder (printed below) from last season’s winner that I was still remiss. (Also a couple of Irish tickets I offered Kinger from the season before couldn’t be used so I’m one behind there as well!)

So, here’s the gentle reminder I received. It did make me laugh!

The sketch: (With apologies to Monty Python)

Dunny: ‘Ello, I wish to register a complaint.

Dunny: Never mind that, my lad. I wish to complain about this prize what I won not six months ago from this very site.

Editor: Oh yes, the, uh, the Ulster FRU…What’s,uh…What’s wrong with it?

Dunny: Look, matey, I know a non existing prize when I don’t see one, and I’m not looking at one right now.

Editor: No no it exists, it’s, it’s in the post’! Remarkable prize, the Ulster FRU, idn’it, ay? Beautiful packaging!

Dunny: The packaging don’t enter into it. It don’t exist.

Dunny: All right then, if it’s in the post, I’ll call the Royal Mail! (shouting at the phone) ‘Ello, Have you got a prize for Dunny from The FRU…

Dunny: He didn’t say that it was you!

Dunny: Yes, you did!

Editor: I never, never did anything…

(Takes phone and thumps it on the counter. Throws it up in the air and watches it plummet to the floor.)

Dunny: Now that’s what I call a non-existent prize.

Editor: Yeah! You delayed it, you called just as the postman was processing it! Ulster FRU’s are delayed easily, Dunny.

Dunny: Um…now look…now look, mate, I’ve definitely ‘ad enough of this. That prize is definitely non-existent, and when I won it not six months ago, you assured me that its total lack of delivery was due to you bein’ tired and shagged out following a prolonged scrum with the Minnesota Panthers (Yeah, In your dreams.).

Editor: Well, I…I was , ah…probably pining for the forwards.

Dunny: PININ’ for the FORWARDS?!?!?!? What kind of talk is that?, look, why did this all fall flat as soon as I won the prize?

Dunny: Look, I took the liberty of examining your web site, and I discovered the only reason that I had been expecting a prize is because you posted that you would be in contact with me about a prize.

Owner: Well, o’course it was posted there! If I hadn’t posted that I would have sent you a prize straight away. VOOM delivered! Feeweeweewee!

Dunny: ‘You’re not pinin’! ‘You’re past it! This prize is no more! He has never been! ‘It’s expired and gone to meet ‘is maker! ‘It’s a stiff! Bereft of life, It rests in peace! It’s metabolic processes are now ‘istory! It’s shuffled off  this mortal coil, run down the curtain and joined the bleedin’ choir invisible!! THIS IS AN EX-PRIZE!!

Anyway, lads, thanks for your patience and I’ll sort you both out over the Christmas break – I’m sure I’ll get some presents that I don’t want!   😈