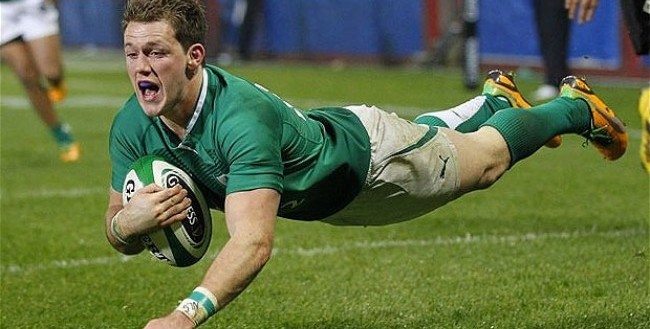 There was shock and awe amongst Irish rugby pundits on Saturday week ago when an Ulster and Ireland centre ran with the ball in two hands and passed it. It was if Webb Ellis was reincarnated.

“It sends shivers down my spine,” quavered Tony Ward in his role as support commentator on RTE and himself no mean ball player in his heyday.

Four tries later, and it was Ireland well ahead at half-time. The RTE half time panel of the 3 Magi’s, O’Shea, Pope and Lenihan could barely contain themselves.

“Fiji are a disgrace,” stormed O’Shea, his multi coloured tie blinking 20 shades of purple as his indignation tripled the moment the cameras were on to him.

“Fiji don’t want to be here,” thundered Lenihan, his all year round movember fairly bristling with wrath.

For his part, Pope fairly shuddered as he muttered that the forwards were not getting a look in.

Eight tries later and Irish rugby pundits, for so long used to Gordon trucking it up in midfield were still unclear as to what they had actually seen.

Over on BBC, Keith Wood was at his most gnomic, in applauding play, whilst Jerry Guscott mostly smiled knowingly having witnessed some basic back play which Irish rugby international audiences rarely see.

A critic whose ears had become de-tuned by years of music of a certain kind emerged from a concert by a New Jersey singer guitarist and said, “I have just seen the future of rock n’ roll – it’s Bruce Springsteen.”

Irish rugby supporters may well have emerged from the Thomond Tank engine and said something similar in a rugby sense.

Trimble missing energises Ireland or did it?

Following nudges and winks from Thornley, Declan Kidney’s radical recipe to keep Ireland from plumbing the depths, blowing the Argies out of the water and saving his own ass is as follows:

Swap one Ulster wing for another

Announce team as if the second coming, (which it was in a way) and press the go button.

I laud Craig Gilroy’s elevation to the Ireland team based mainly on his attacking skills, but will he get any decent ball in space with which to use his footwork and evident pace?

The answer is likely to be no. Based on the evidence of 2 weeks ago. The centres, Earls and D’Arcy do not create space inside for the wingers to exploit outside. Earls centre play is something akin to his wing play, run with the ball and when the space closes down, grubber kick it.

Question is. Will this team rise above the dross it has served up so far and produce a performance?

Tony Ward wrote prior to the Argentina match:

“I would like to think that the most exciting back three we have fielded for some considerable time will be given the ammunition to counter-attack this afternoon, but as Craig Gilroy will learn (and few embrace his selection more than me), Test rugby doesn’t work like that.

There were acres of space afforded in Limerick seven days ago, but there will be precious few inches given up today.”

The result was Gilroy waltzing past defenders and Sexton copying him. Naturally there will be calls for 4 more years for Kidney. Bottom line was, Ireland’s needs for a win were well in excess of anything Argentina required and it showed.

So too does the need to bring fresh faces in. This win was based on individual brilliance of the outside backs and Sexton allied to Ireland getting far better ball from the pack than they might have expected against opposition of this calibre.

Pundits Do About turn and Salute

Unlike the half time and full at Thomond, Saturdays RTE panel, with Lenihan being dropped to the bench and Hook promoted, were far more effusive.

It culminated with Hook closing his eyes and lying back and dreaming of Ulster. It’s good to see Ulster re-emerging, quaffed Hook, a strong Ulster means a strong Ireland.

He said this without a flicker of irony as I rolled back the years and wondered how Ireland had managed to win all those games since 2000 with no more than token Ulster players in the squad.

If a strong Ulster equals a resurgent Ireland then bringing players off the beach in Portugal to play the AB’s in NZ hardly qualifies as resurgence in the selection stakes.

Kidney arrives at his default position on selection as much by chance due to injuries as by any leap of faith in a player’s ability.

Gilroy is a prime example.

Gilroy v Trimble – why not Bowe?

As Gilroy descends to earth (he did pose in a caterpillar tractor at Ravenhill), after the stratospheric heights reached just last Saturday he will be aware of calls for his elevation to the Ulster starting team in the place of Andrew Trimble.

Gilroy will do well to recall how just over 10 months ago a Tigers team were put to the sword at a feverish Ravenhill. On that evening of pulverising rugby by Ulster, Trimble scored two tries in the tightest of spaces, standing up one of the Tuilagi’s in the process.

It was a great performance by Trimble and he has not been off form for Ulster recently either but finds himself scapegoated by Ireland for the South African game in which he was one of many who didn’t play well.

Ten months can be a long time in rugby. I do not agree that it is a straight fight between Trimble and Gilroy for a place. Why not Tommy Bowe? Any team needs a defensive wing and Trimble certainly fits that suit.

A bit of juggling will be required by Anscombe over the next few weeks and it will be interesting to see whether public hype supplant realistic combinations in the back three, not to mention at centre.

Following the Zebre tussle, the Ulster team moved on. They couldn’t usurp the Zebre below par experience and hope to play the get out of jail free card two weeks in a row.

I imagined there would not be a repeat of last week’s inertia and the team would be suitably grilled not to repeat against Treviso.

Well the Ulsterians didn’t have a great game but perhaps we are now so blinded by huge expectation when we see certain names on the team-sheet that we automatically expect us to walk over any opposition.

This is being unfair to the Italian opposition these last two weeks who have turned up to play with a fair amount of commitment and skill. We need to get used to our 2nd choice players playing on a regular basis due to International call-ups and injury.

It is the price of success.

I don’t believe we got out of jail at Treviso, we dominated the game for long periods, crossed the line twice and were denied at least one of them as a legitimate score, didn’t play well and won.