Queen’s University will be holding three female U18 Performance Camps this summer at their impressive sports facilities at the Dub Pavilion, Upper Malone Road, Belfast.

The camps will be held on Wednesday afternoons on the 11th, 18th and 25th of August and we caught up with Camp Manager David Chambers to find out more.

David has been involved with elite girls rugby since the inception of the Girls U18 Interprovincial Tournament in 2016 and was part of the Ulster Girls U18 rugby coaching team that claimed the grand slam that year – following on from that he spend two years as head coach of Ulster Senior women. 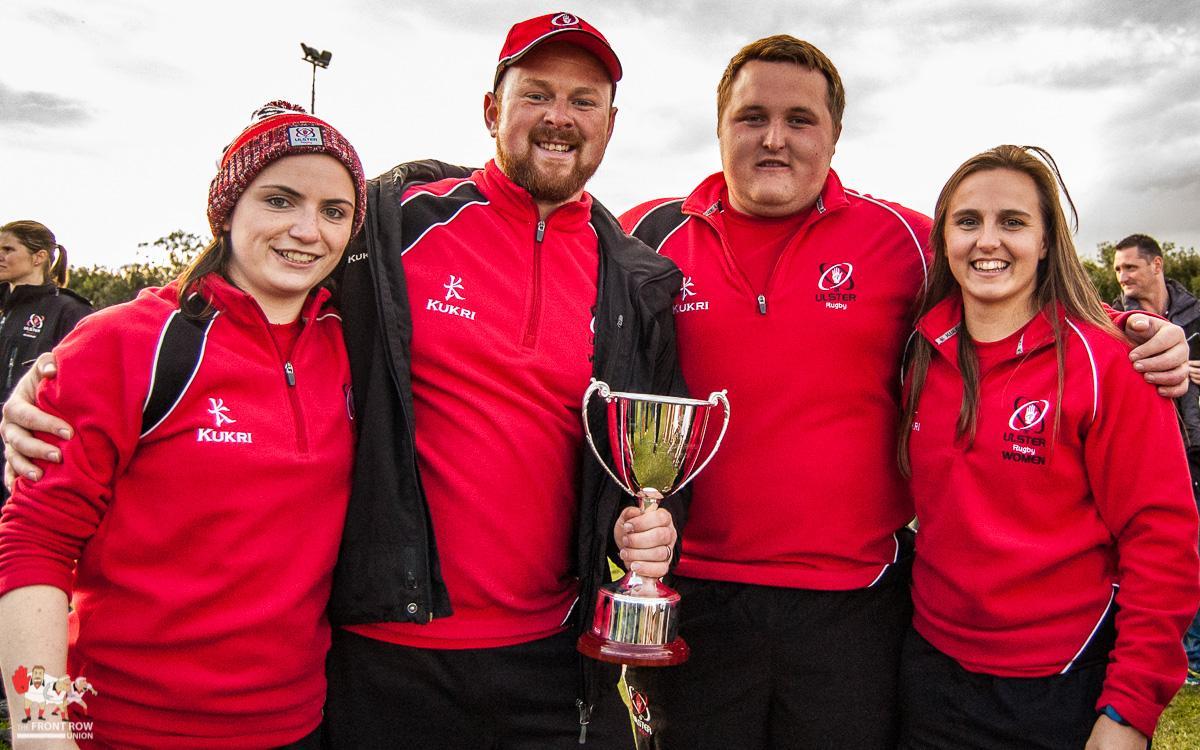 David Chambers, 2nd left, with the U18 Coaching team after winning the U18 Provincial Grand Slam

What is the purpose of the camps?

“We see the women’s game as an important part of our rugby development at Queen’s University and we are keen to give young female players and cross over athletes a chance to experience a performance rugby environment. Our aim is not only to enhance their skills but to give them lifestyle learnings that will enhance their on field work and embed good personal practices.”

Who is involved with the coaching?

“We have a strong coaching set up. Charlie Farrell and Jemma Jackson, or should I say the new Mr and Mrs Farrell, will be two of our coaching leads and as you know they have been involved with the Girls U18 setup since it started. We are also able to call on, Irish International, Claire McLaughlin who has a wealth of experience to impart.

The camp leads will be supported by Derek Suffern who was looking after the Senior Women’s set up at Ulster Rugby and we also have one of the leading strength and conditioning consultants Mike McGurn on board alongside nutritionist and performance coaches from Queens Sport Elite Athlete programme – it’s a very strong team with unrivaled experience.“

What sort of players are you looking to attract?

“We are looking for players, or crossover athletes, aged 15 – 18 who are keen to either improve their rugby, or adapt their skills, with a view to playing at provincial level and beyond. However our focus will be to provide the necessary skills coaching and lifestyle learnings to improve their game at whatever standard they play. We want players who want to learn.”

It’s difficult for young players to get this level of coaching in the Women’s game. Are you prepared to consider including younger players if recommended by club coaches?

“We would be prepared to make exceptions after consultation with coaches and, or course, subject to parent/guardian approval.”

How much does it cost?

“It’s £50 per person for all three camps, the content of which will be different and will progress over the three weeks.“

It sounds like a great opportunity for young players to develop their game or for cross over athletes to sample the skill set in a controlled manner. If you would like to attend you can sign up now by clicking the link below.

If you are still undecided keep an eye out for follow up articles on the Front Row Union  as we catch up with the coaches over the next few weeks.

Log in using your existing membership details. All "previous member" details have been transferred to the new system. CLICK HERE FOR MORE INFO

After logging in check your details by visiting your membership page and you can change your profile and password here.