Skip to the content
Report and pictures by Richard Owens

New season, new coaching team and some new faces amongst the ranks, CI would be hoping to show Dromore who put 40 points on them during their last visit at Belmont that they will be a side to be reckoned with this year.

That’s exactly what happened, a fast, exciting, fiercely contested game which could have gone either way right up to the last minutes.

Paddy Beverland for CI got it started on the pristine surface and from the off both sides attempted to establish some territory. It was a breathless start, 6 minutes before the first break in play with a CI line out within their own 22.

With the breeze behind them a well placed kick from the line out gave short relief before Dromore mounted a counter attack from the fielded ball. With the forwards occupied near the posts the ball was whipped out from Dromore out half, TJ Morris, not to Josh Pentland who was marked closely but to the right wing, Brian McClearn, who had appeared midline. He was home and dry you’d think but for a heroic tackle from CI scrum half Fullerton, who chased him down to the try line and dislodged the ball just before the Dromore man fell to the try line. Fantastic defence from CI and uncharacteristically careless from Dromore.

The 22 drop out saw Dromore come at CI again and with all this territory it was inevitable Dromore would finally get some points. Penalty for not releasing on their 22 saw Dromore scrum half kick the penalty and it was 3-0 to the visitors.

The restart gives CI some territory and hard work from the forwards is rewarded with a penalty. Beverland puts the kick perfectly to touch and the home team have an attacking line out 5 m out. Cleanly collected the ball is reworked from the maul and after 4 recycles Gilliland bashes his way over on 25 minutes. 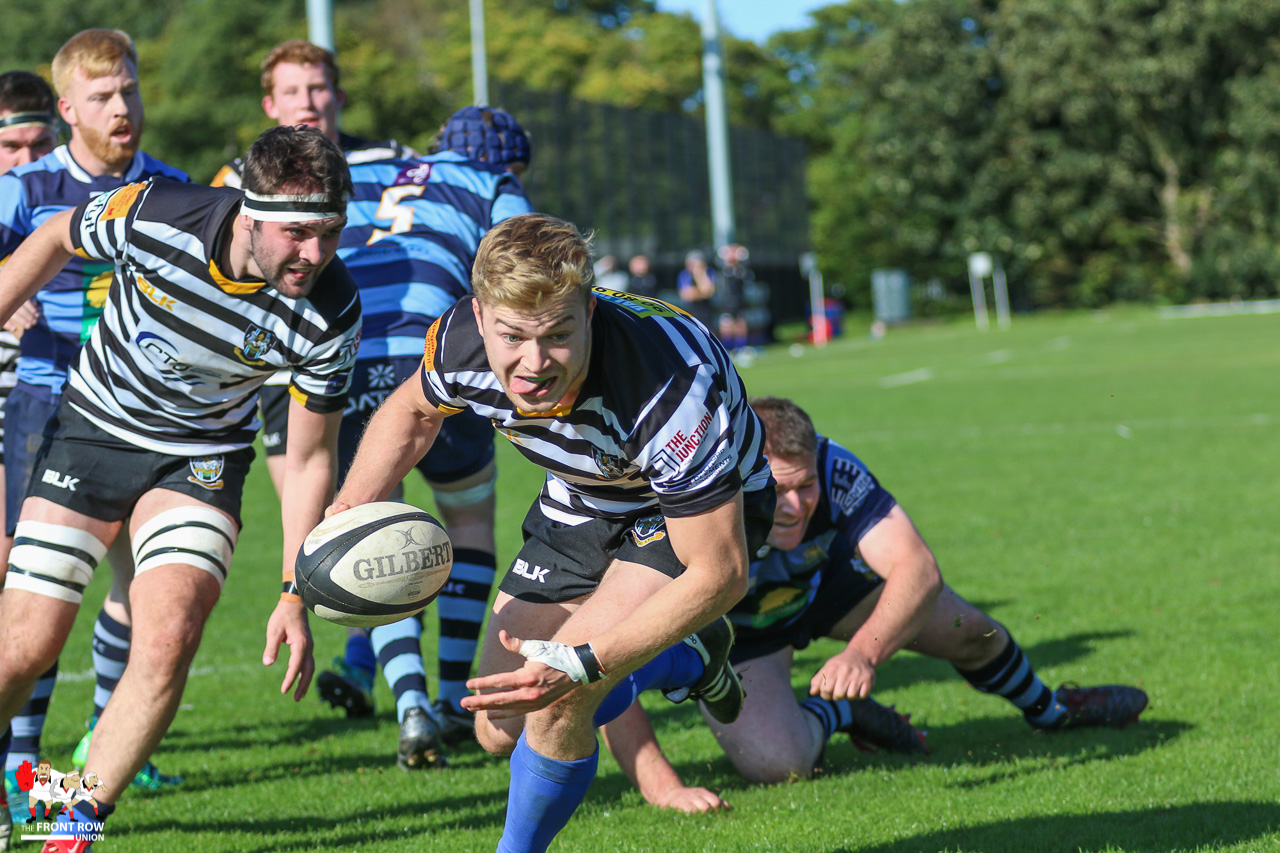 CI go over for an early score

There are some handbags afterwards but Beverland is not distracted and slots home the extras. 7-3 to CI and we have a spikey contest on our hands Dromore nearly reply with a try after Pentland spots a mismatch midfield and rounds the CI forward , feigning a pass before cutting back and sliding the pass to his tight head who just is caught by CI right wing.

With the defence scrambled Dromore press yielding another penalty and from almost the same spot as his first shot at goal Dromore and kicking scrum half Steenson, brings his team to within a point after half an hour.

The resets affords CI a second venture into Dromore territory and the Co Down squad elect to kick clear into space but Beverland collects the high ball then skillfully steps the Dromore chaser before racing down the touch line from inside his own half. He is trailed by his wing Raine and outside centre Burns, and when Beverland is caught the offload inside to his support players is accurate and Burns ends up with ball in hand. He makes 30 yards before being tumbled 3 m from the try line. CI attempt quick recycling but Dromore’s left wing, Dillon, who raced back to defend his line illegally, and in the eyes of the referee, deliberately interferes with play and is sent for a rest behind the posts.

With the extra man CI work the ball along the width of the pitch and soon Fullerton squeezes his way through to go in near the posts. Yet again there are some afters and again Beverland ignores the nonsense and kicks his team further ahead. 14-6.

Dromore aren’t done with this half yet and from an promising attack CI’s impressive flanker, Butler, gets a yellow for slapping the ball down as Dromore look to strike before the half time whistle which is exactly what unfolds and they cross the try line just before half time and the add extras 14-13 in the home teams favour at half time.

Fluids replenished on this sunny afternoon the second half starts with some exchanges mid park. From a ruck inside his own half CI’s Fullerton sends up a mighty box kick made more tricky to collect with the sun streaming into Dromore player’s eyes. The ball is caught but CI have put in a good chase forcing Dromore to spill the ball. Fullerton scoops up the loose ball and races to the corner to bring CI another 5 points. The difficult conversion is missed but CI are ahead again, 19-13 on minute.

They look like they might score again this time from deep with the backs in full flow but a perfectly timed tip tackle by Dromore’s Dillon on his opposite number tackle sends CI’s Peden tumbling to the turf. CI don’t release and a relieving penalty is awarded to Dromore.

Again an atypical mistake from Dromore sees them miss touch and Beverland launches another towering high ball. No mistakes from the visitors this time as the ball is fielded and then punted deep into the CI 22.

Beverland is forced to play the ball as Dromore’s hard working wing Dillon is there to fight for possession. The ball is half cleared to the oncoming Dromore pack and now they have the ball and territory. CI are not in the mood to roll over and that man Butler wins another turnover to give his side an out just as it looks Dromore might be gaining the upper hand. Then came an unusual piece of skill from Dromore’s scrum half as he disrupted the pass from his opposite number from the back of the scrum with his big toe. The ball was gathered by Dromore’s alert 7 and quickly Dromore turned a defensive scrum into attack. Two phases later Morris spread the ball via Pentland to right wing who sped over the line to give Dromore their second try. Conversion good Dromore have their noses in front for the first time. 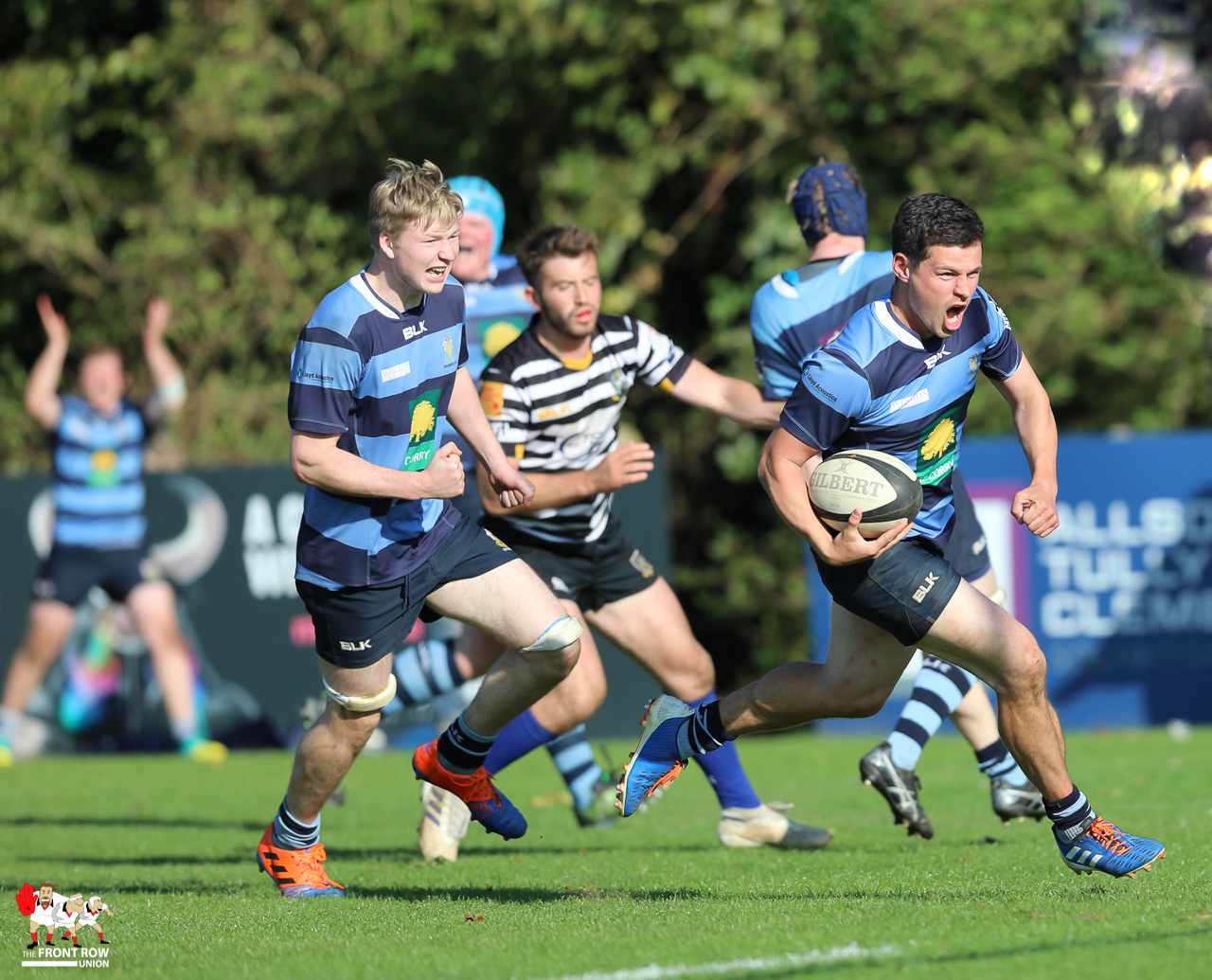 CI regain the lead with a penalty from Beverland after Dromore are caught offside and it looks with 10mins to go, 22-20 to the home team, CI might have this match won.

Dromore were league and cup contenders back in February and their pedigree came to the fore in the last few minutes.

They sent a long ball into CI territory and the quality of the chase forced CI to recklessly punt the ball back upfield into the arms of Pentland just inside his own half. Pentland is a seasoned campaigner and he showed some real flair weaving past four CI tacklers before stepping inside to offload to his lock who didn’t have the pace to get home but beautifully returned the pass to the still running Pentland who finished off the move that he had started with a try under the posts. Quality play and the wind was stripped from CI’s sails.

One more penalty from a scrum pushed the scoreline to 30-22 and the match was won. Usually the MOM goes to a player on the winning side but as this contest was so close for so long I gave the honours to CI’s flanker Paddy Butler who showed an admirable work ethic and tireless ambition.

Hard luck to CI who on the strength of this performance will not be propping you the table this year. Congratulations to Dromore who again look like contenders to win league or cup if they continue to improve