Joe Dunleavy (Malone) grabbed a couple of tries during Week 14.
All Ireland League 1B

At the time of writing there are three weeks of the AIL 1B competition postponed with the fourth and final week still scheduled to go ahead in mid April.

You can view the fixtures in the drop down below.

The final round is still scheduled for mid April, as follows, however this is subject to change.

We really should have reviewed week 14 of the Energia AIL 1B at the time as it really was an exciting week for the Ulster sides involved.

City of Armagh brought Shannon’s highly impressive run to a juddering halt at the Palace Grounds, Banbridge turned over Naas away from home and Malone got revenge on an earlier defeat at Gibson Park by taking the points against  St Mary’s College at Templeville Road.

It was actually a good week for our predictions, with four out of five, City of Armagh’s win against Shannon being the one to throw us off.

The results, however, didn’t have a huge impact on the league placings. Old Wesley lept back into second place at Shannon’s expense and City of Armagh leapfrogged old Belvedere to form an Ulster bridgehead ready for a challenge on the top four should the league resume. 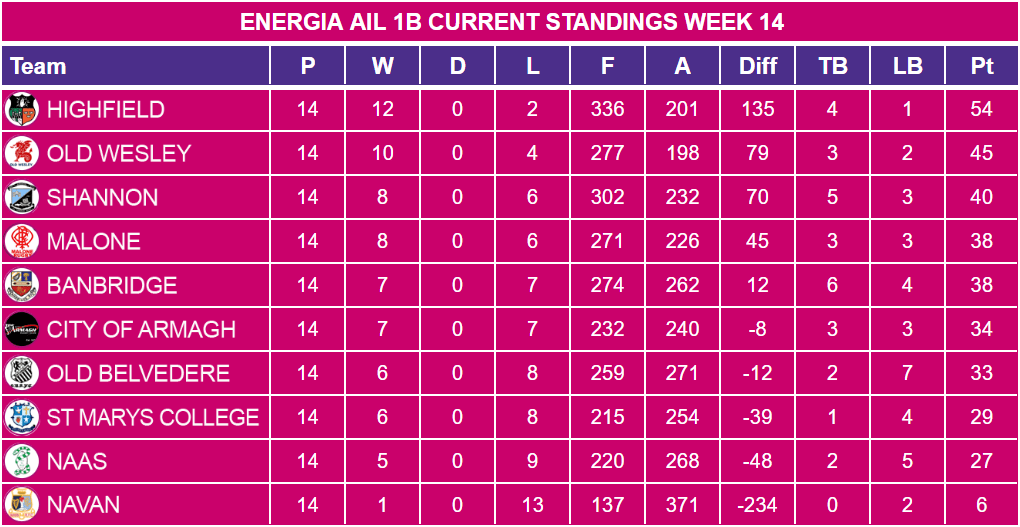 Joe Dunleavy (Malone) and Josh Pim (Old Wesley) were the Week 14 leading scorers with Cormac Fox (City of Armagh) next in line with 8 points from 2 penalties and 1 conversion.

Fox’s eight point haul sees him move into third place in the leading scorers table with Rory Stynes ( 3 conversions) and Peter Osborne (1 penalty) the only others in the top six to add to their totals.

Highfield’s Colin O’Neill was the only leading try scorer to get over the line in Week 14, his single try moving him to joint third alongside Shea O’Brien on 7 tries for the season. 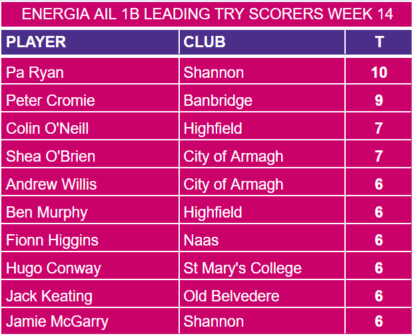 We’ve included all the scorers from all the clubs in the drop down below to give you something to read over this quiet period. Please check them out and let us know if there are any amendments we need to make.

ENERGIA AIL 1B ALL SCORERS ALL CLUBS
CLUB MEN ADVERTS