Dromore came out on top against Ballymoney in the Towns Cup on Saturday afternoon.
Club Men

By Editor on February 3, 2020 0 Comments
Dromore came out on top against Ballymoney in the Towns Cup on Saturday afternoon.
CLUB MEN ADVERTS
PRINTS

PRINTS AT THE FRONT ROW UNION
Report and pictures from Richard Owens.

Perched on top on Barban hill, hunkered down sheltering from the muscular wind I anticipated this game was going to be decided by who’s control of the conditions was better.

Dromore fielded the kickoff and kept the ball in hand playing their way up the pitch before Pentland cut back on the angle and had a clear paths to the posts. Conversion good and Dromore were off to a flyer, 7-0 up after 3 minutes.

Ballymoney attempted to force Dromore into their own 22 with well placed kicks but the home side were in confident mood and were happy to run the ball from deep, using the full width of the pitch, manoeuvring up field before the pacy left wing Rutledge sprinted inside and touched down under the uprights to get try number two, again converted by scrum half Steenson.

This is a bullet start for Dromore who are playing attractive rugby, trail runners on each side of the ball carrier, off loads, quick recycling, all skilfully directed by Pentland who is interchanging positions at first receiver with his out half Morris.

Ballymoney are struggling to defend against this expansive sevens style format but to their credit they regroup. They look to their big pack and working in pods attack the 10/12 channel punching through, forcing support players to plug holes and deservedly their endeavour yields a try from the right wing Matthew Bell to bring the score to 14-5 at half time as the difficult conversion slides wide. 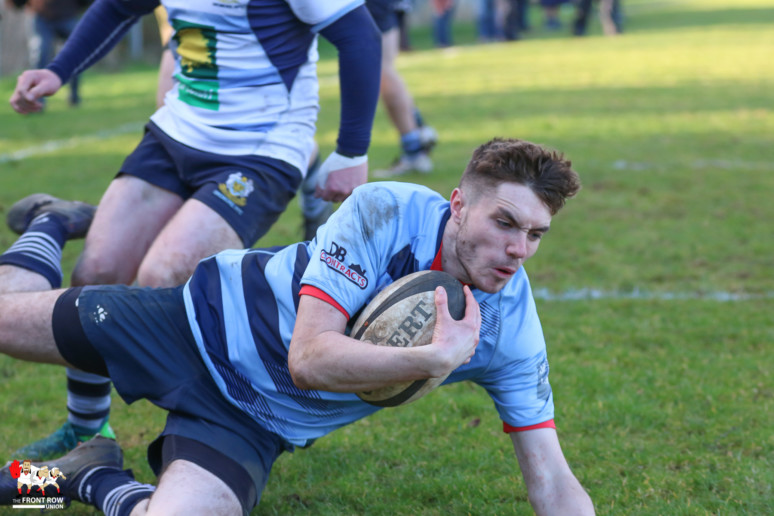 Matthew Bell goes over for Ballymoney

Now with the wind will Dromore change tactics and how will Ballymoney respond playing into this challenging breeze?

Ballymoney deserve credit battling to the end but there was no way back and Dromore comfortably go on to the next round.

The Front Row Union MotM – Josh Pentland. Hear his view of the match in the short video interview after the game.