Ballynahinch lost out to Cork Constitution in a match that had all the weather at Ballymacarn Park!
Club Men

By Editor on February 17, 2020 0 Comments
Ballynahinch lost out to Cork Constitution in a match that had all the weather at Ballymacarn Park!
CLUB MEN ADVERTS

I finally caught up with AIL 1A runaway leaders Cork Constitution on Saturday afternoon when they visited Ballymacarn Park to play Ballynahinch in the league.

The Cork side made their journey home with four points after coming out on top in their battle against Hinch and some pretty awful weather to win 5 – 16.

The game kicked off in poor conditions with heavy rain and a strong wind at Ballynahinch’s back and it got progressively worse throughout the first half.

If anything the wind was too strong for Hinch to reap any benefit with several of their clearance kicks either going straight into touch or racing over the dead ball line for a scrum back. However the bulk of the first quarter was played in the Cork Con half with defences, and the atrocious handling conditions, prevailing.

Cork Constitution probably strung together the most phases, with no other option but to try and run the ball out against the strong wind, and, looking down the lens at their play, they worked some nice moves with plenty of options behind the ball carrier. In fact their movement was very good and it’s a pity I didn’t get to see this game in prime conditions.

It became more and more attritional as the game progressed and with the league leaders probably getting the lion’s share of the 50/50 decisions they worked their way downfield for Gerard Hurley to open the scoring with a 35th minute penalty.

Hurley opens the scoring with a penalty at Ballymacarn Park.

Scenting an opening, the visitors continued to ratchet up the pressure for the remainder of the half and they got their reward 10 minutes later when Brian Hayes crashed over cose to the posts after scrum half Duncan Williams had put them back in the red zone with a sniping run. Hurley added the extras to give Cork Con a 10 point lead at the break.

Brian Hayes heads for the line against Ballynahinch.

Wouldn’t you know it, the torrential rain that had plagued most of the first half cleared at the start of the second and the wind dropped to a more manageable level. Cork were able to take advantage and astute kicking from Williams and Hurley kept Hinch pinned in their own half for the next 30 minutes.

Hurley racked up two more penalties to take a 16 point lead, Hinch leaving it too late to raise their game.

Zac McCall leads the charge for Hinch in the second half.

However, they gave it a good go in the final ten minutes, with Zac McCall and Marcus Rea to the fore, and I’m sure, as they bashed their way downfield, that they wish they had started their comeback earlier. The Cork side weren’t going to give anything away easily and it took until the final play for Hinch to get over the line. 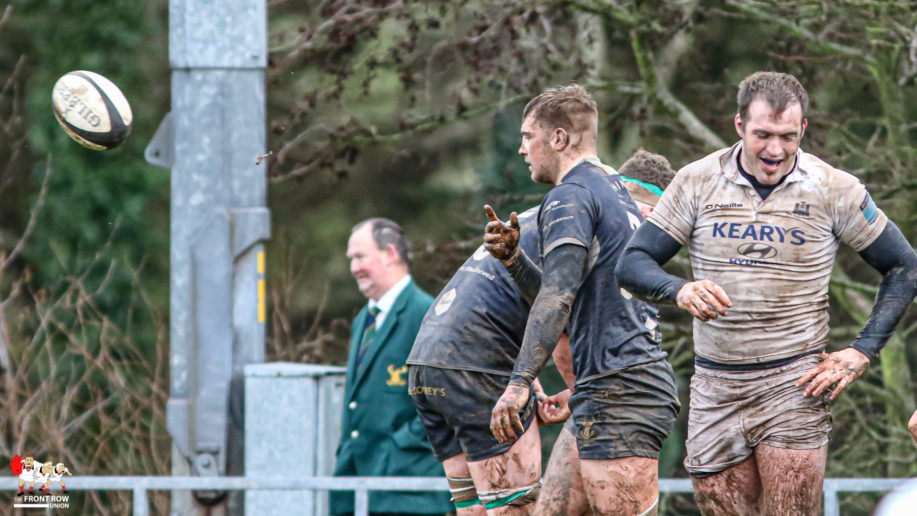 Marcus Rea comes up with the ball for Hinch’s only score.

Marcus Rea came up with the ball at the bottom of a pile up out wide leaving a final score of Ballynahinch 5 Cork Constitution 16.