Dromore put CI to the sword in handsome fashion when the east Belfast lads were on their home patch earlier this season and since then their respective fortunes have been migrating in opposite directions, Dromore upwards to league leaders and CI hovering just above the basement.

Gareth Fry’s men would be keen to make amends.

Murky, mild, windless as Dromore kick off deep into the CI half. Not much to say about the opening exchanges but I’d award CI the first round as the play is mostly in the Dromore half.

CI fashion an opportunity when Dromore are caught off side and Kilgore shunts a superb kick right into touch beside the try line flag but the opportunity is lost when the line out falters and Dromore hoof the ball downfield.

The home side continue to hammer away at the league leaders and a fine break by the flanker, Butler, almost sees him through but again Dromore defend well enough to clear the danger. At this stage you’d not put these two teams at opposite ends of the table as CI look more polished in possession.

Dromore now respond with some effective play but no breakthrough. They enjoy total control at the scrums, propelling CI rearward on every occasion, gaining their team a penalty and possession. From one of these, scrum half Steenson takes a quick tap and charges forward catching CI by surprise and it looks like Dromore might break the deadlock but the scrambling CI defence, though creaking, holds and there is still no score. 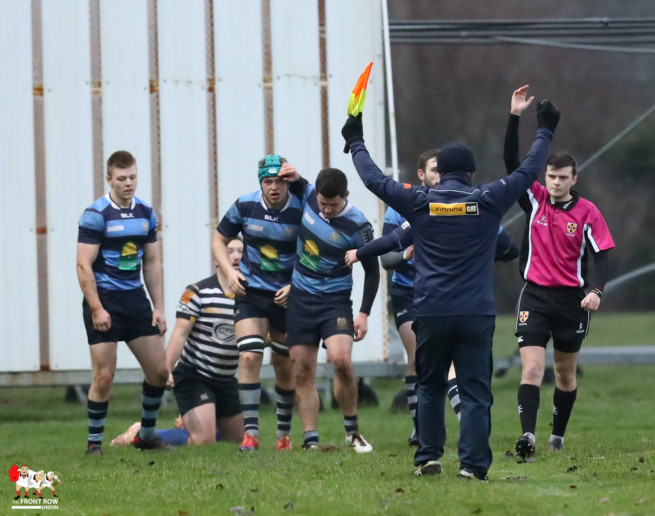 Dromore celebrate their try against CIYMS

Again Dromore advance and they are only yards short of the CI line. The tackling is furious and the tumbling CI defence lie over the ball. The ref’s arm is out but the slow ball prevents Dromore from scoring and the ref reaches for the yellow card and Aiken, CI no 5, is sent to the bin. There is a lot of chatter and the ref speaks to both Captains, one of many conversations he is having this afternoon.

Play resuming from the scrum 5m out it looks a dead cert that Dromore will score but an atypical mistake from Pentland as he is hurtling towards the try line sees the ball knocked on and it is belted upfield. There is a good chase from Beverland and as Dromore 15, McDonald picks up he shoulder charges Beverland thrusting him off his feet. The ref calls a penalty and the Dromore players voice their dissatisfaction at the decision. They are promptly marched backwards a further 10 yards gifting CI a prime opportunity to have a shot at the posts.

Kilgore lines up the kick but it slices wide as the half time whistle blows. 0-0 HT

We’re into the second half and Dromore have noticeably picked up the pace. 43 minutes in and CI offside on their own 22 and Dromore’s kicking scrum half Steenson has his first attempt at the posts which he misses. The 22 drop out is long but lands in the hands of McDonald at full back who accelerates and weaves past multiple tacklers before being caught by winger Newell just in time.

CI are short a player and Dromore send the ball sharply back across the field into the hands of their mobile number 8, Heath who shows skilful hands and pace to deceive the struggling defensive line and go over for a try. Finally there is a change to the score line on 47 minutes. The conversion is missed.

Dromore maintain the pressure and again force a penalty which Steenson converts pushing their lead to 8-0.

CI get their man back and with numbers evened up they successfully compete in the loose, and on all set pieces except for the scrum. They get their reward on the 60th minute when a penalty is converted by Kilgore and this match is hotting up as are the player’s tempers. 8-3. There are lots of voices and both captains are requested to revisit the ref.

The play is fractured with indiscretions and penalties and eventually Dromore have an chance to extend their lead with yet another penalty just inside the CI 22 about 8 yards wide of the posts. The shot is accurate and it’s 11-3.

The play is intense and Dromore try and wring out any remaining resistance from CI. Dromore look like they might finish with another try but aggressive defending from CI keeps them out although illegally. The ref reaches into his pocket to send the offending CI player for an early bath and words are exchanged. Before the yellow leaves his pocket there is a further discussion of sorts and the ref swaps the colour for a red.

The contest is over and the ball is booted off the field. Final score 11-3. 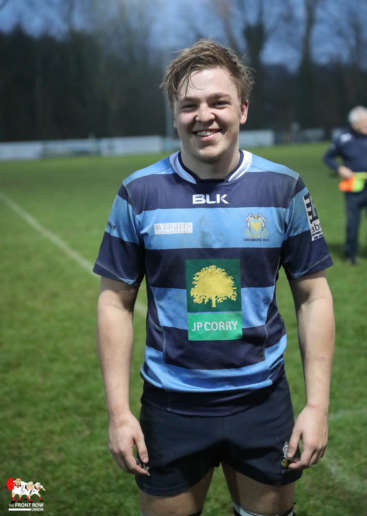 I had a chance to talk to the coaches after the match . Watch the short videos to see their reactions to the game.