UCD will be hoping to maintain their recent good run, which started against Ballynahinch, when they face local rivals Terenure College on Saturday
All Ireland League 1A

By Editor on November 15, 2019 0 Comments
UCD will be hoping to maintain their recent good run, which started against Ballynahinch, when they face local rivals Terenure College on Saturday
CLUB MEN ADVERTS
JOIN US

With our friends at Ballymacarn Park finally opening their account last weekend we can now start our predictions for the Energia AIL 1A with a degree of confidence in an Ulster club win!

The league to date has been dominated by Cork Constitution who have won all five matches, though they have picked up only one try bonus so far.

Terenure College are hot on their heals with four from five with UCD, UCC and Garryowen next in line with 3 from five. 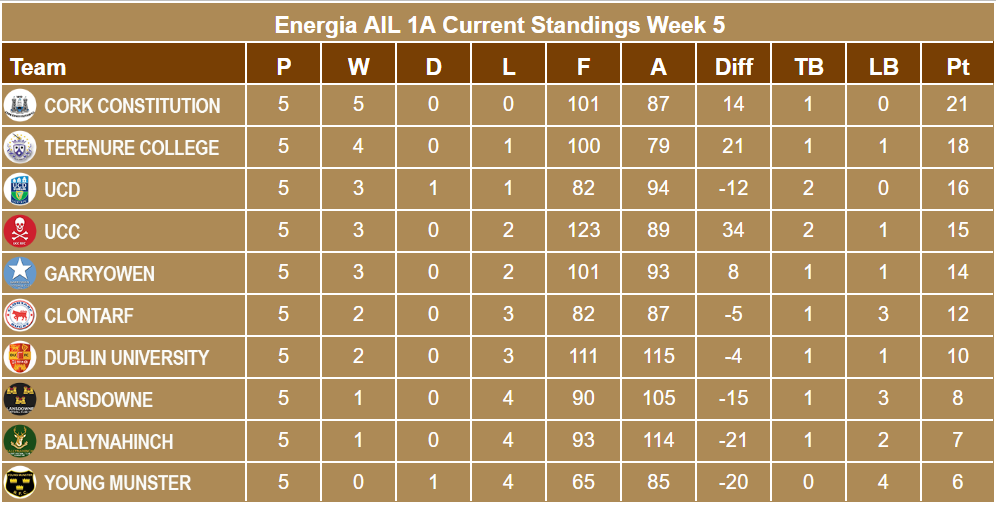 The bottom half of the league sees Clontarf and Dublin University on two wins each leaving three teams battling it out at the bottom with two points separating Lansdowne from Young Munster with Hinch in the middle. 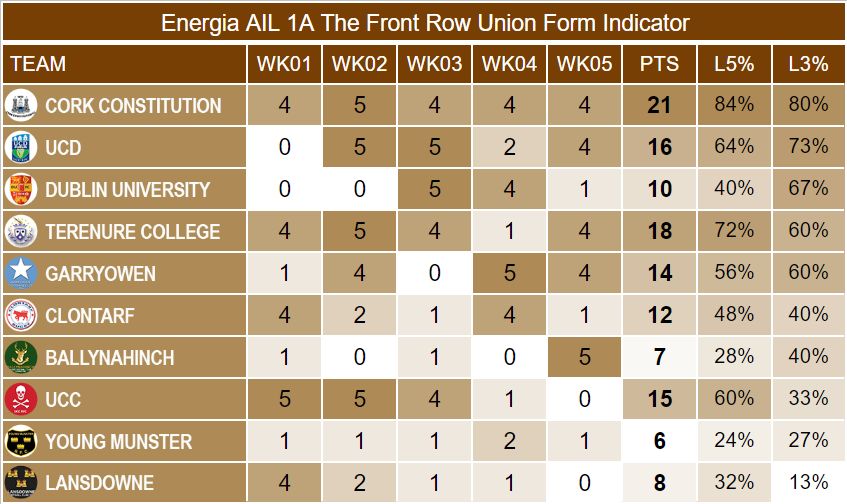 It’s a worrying table for UCC, Young Munster and Lansdowne who are showing disappointing current form though Young Munster can take some comfort in that they have picked up at least a point in all their matches.

We’ll now use the above form indicator to help predict the outcome for this weekend’s fixtures shown below.

This is a big game for out of form UCC who entertain local rivals and league leaders Cork Constitution at Mardyke on Friday evening.

However UCC will be well motivated to end their disappointing run which has seen them lose two of their last three outings after a strong start to the season. They remain the leagues leading try scorers and they have an 83% try conversion rate so accumulating points isn’t their problem. They will need to turn their attention to defence after shipping an average of 22 points per game over the last three outings.

In Cork Con they face the model of consistency. They haven’t been winning their games by big margins but their impressive game management has  seen them finish a couple of points the right side of the scoreboard in all their matches.

It seems to be a classic flair against composure match up and it has all the makings of an entertaining local derby but the current form appears to be too much in Cork Con’s favour for an upset.

There are only three points and a couple of places between these teams in the league but they appear to be two teams on the rise after disappointing starts to the season.

Dublin University’s only reversal, in the last three rounds, was a three point loss to Cork Con and the students will be confident of ending Hinch’s mini revival before their visitors build up a head of steam for a charge up the table.

Hinch however will be intent on getting their second win of the season after their big win, in difficult conditions, against Lansdowne. It may have been a bottom three clash but it was a convincing win for the Ulster club.

It’s an interesting one, but it might just be the wrong team at the wrong time for Hinch in what I expect will be a high scoring game with the Dublin side just edging it.

There are only a couple of points separating this pair in the league. Clontarf showed slightly better form over the opening rounds but Garryowen have picked things up over the last three games wining their last two on the bounce.

However, Clontarf have been playing top of the table opposition and not losing by much, picking up four bonus points in their three defeats, whereas Garryowen’s last two wins have come against the bottom two sides.

Looking at their stats over the season, Clontarf  haven’t been scoring enough and Garryowen have been conceding too many and it looks to be a well balanced game.

I’m not seeing anything decisive in the stats so it comes down to Garryowen’s current form against Clontarf’s match preparedness against tougher opposition.  I’m going to go for a draw.

You have to feel for Young Munster who have lost every game by less than 7 points, they really are due a win.

Lansdowne are showing the worst run of current form in he league so this is an ideal time for Young Munster to be meeting them. I suspect the visitors will be making the trip back to Limerick with their first win in the bag.

Another local derby and it has all the ingredients to be another classic encounter as third placed UCD host second placed Terenure College at Belfield on Saturday. They are also two of the current form sides with UCD having the second best points pick up over the last three games and Terenure have the fourth best return from the last three.

We caught up with UCD a few rounds ago when they started their undefeated run at Ballynahinch, but it was a game that could have went either way. Since then they had a draw against bottom club Young Munster before grinding out a narrow win against Clontarf. Despite this run of three games, without a loss, they still have a deficit in their points difference column.

Terenure have the second best win rate over five games with a 72% points return. Their match points collection dropping off a little due to a defeat to top of the table Cork Constitution in Round 4. The Lakelands side have the best defensive record in this high scoring league but they are still conceding almost 16 points a game.

While UCD are favourites on current form I just don’t think that they have faced the quality of opposition necessary to prepare them for high flying Terenure College so I’m tipping an away win for this one.