You are at:Home»Ulster»Ulster Women»Ulster Women: U18 Girls to entertain Midwest Thunderbirds.

Amanda McQuade in action for Ulster U18 against Connacht last season.
Ulster Women

By Editor on August 2, 2019 0 Comments
Amanda McQuade in action for Ulster U18 against Connacht last season.
ADVERTS

Ulster Rugby U18 Girls continue their Interprovincial preparations with a friendly match against (our old friends) Midwest Thunderbirds on Sunday afternoon at Banbridge RFC. Kick off 13:00.

It’s always interesting to see the latest crop of youngsters and the reports we’ve heard so far have been encouraging, with coaches Charlie “The Duke” Farrell and Zoe “Yellow Card” Templeton particularly enthused about this current cohort.

Ulster won the inaugural trophy back in 2016 with “The Invincibles” recording three wins from three in a competition covered exclusively on The Front Row Union.

Unfortunately, the girls XV game hasn’t progressed as projected, playing numbers appear to have dropped following the  performance of the Ireland Women’s XV team at the 2017 World Cup and the IRFU have thrown it’s support behind the 7s programme.

There have been some successes, with “Invincible” team members Brittany Hogan and Lucinda Kingan going on to pick up caps for the Ireland Women’s 7s side but, in the province of Ulster, the competitive Club XV game has largely disappeared due to insufficient playing numbers to sustain a league.

The results have followed, with the Ulster girls picking up only two wins over the last two seasons, results below.

In summary form thier results over the other provinces over the last three years are as follows.

They are still the right side of the 50% mark in terms of win % and, in fairness, they threw away the game against Connacht last year who, also in fairness, built on thier last gasp win to go undefeated to lift the championship.

How will they do this season?

It’s difficult to say as, with no league to cover, our coverage of the U18’s has slipped off somewhat. They had a reasonable build up for the 2018 season with a game against Nova Scotia ahead of two outings against Ontario  but this match against Midwest Thunderbirds is the only pre – interpro run out they are getting this season. 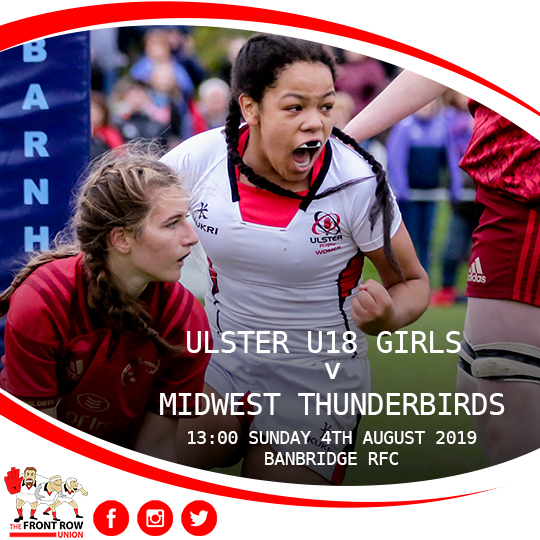 The squad for the Interprovincials is as follows.

The team will be captained by Virginia’s Eva Fannin with Ella Garland (Cooke) and Amanda McQuade (Virginia) as vice captain all of whom bring plenty of experience, alongside Aoife Cahill (Malone), India Daley (Enniskillen) and Lucy Turkington (d=Tungannon).

Turkington and Mya Alcorn were both involved with the Ireland U18 7s team this season, Alcorn making a welcome return from a season long injury.

The team also features three players from my local club Larne RFC. The talented Toni Macartney is in for her second season and is joined by speedster Jana McQuillan and Ballynahinch native Erin Carson who played for Hinch and Larne but has run out for Malone of late in her search for game time.

We’ll have a catch up with the players after Sunday’s game for our final review ahead of the Interpros.