You are at:Home»Club»Club Women»Club Women: Malone lift the Junior Cup

Malone RFC Women completed a League and Cup double on Saturday afternoon by lifting the Ulster Junior Cup, at Ravenhill Stadium, after a hard fought match against City of Derry RFC Women.

It took awhile for the game to warm up.  City of Derry just about edged a nervy first quarter and they took a deserved three point lead at the start of the second quarter as out half Cíara Moore slotted over a neat penalty.

Malone responded almost immediately, their abrasive centre Brógáin Ni Chiarrain going over for an unconverted try to take the score to 5 – 3 in Malone’s favour and that’s how it remained until the break.

The Belfast side cut loose at the start of the second half as Neve Jones emerged from the bottom of a pile of biddies to claim their second try and shortly after Fern Wilson outstripped the defence out wide to finish under the posts for Ella Durkan to convert which rattle the score along to 17 – 3.

Derry refused to go quietly and a period of sustained pressure in the Malone half ended with Stacey Lea Kennedy going over for a try.  Moore added the conversion to make it a one score game at  17 – 10.

However, the pace of the game and the unseasonably warm weather was beginning to take its toll on Derry and Malone put some distance between the sides as Holly Brannigan sprinted clear for their  fourth try, converted by Durkan, before Rebecca Lawlor battled over from close range for number five, after good work by Lauren Maginnes.

To their credit, the Derry side kept battling until the final whistle and they got some reward for their efforts when, captain, Michelle Gormley-McLaughlin went over with the last play of the game. Moore added the conversion with the final kick to loud cheers form the voluble Derry support.

We caught up with City if Derry’s captain Michelle Gormley – McLaughlin, Malone player Ella Durkan and Malone’s coach, Grace Davitt, after the game.

In a hard fought game, with quite a few good individual performances, The Front Row Union’s, Samurai Star Player of the Game goes to Malone’s Lauren Maginnes who was outstanding in attack and defence and worked tirelessly to help Malone keep their shape and composure when Derry put them under pressure. 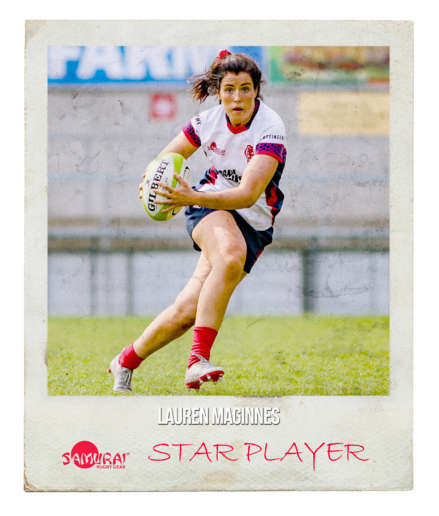