Ulster Rugby’s run of consecutive bonus point wins came to a sodden end at a muddy Ravenhill on Friday night as the conditions leveled the playing field between Ulster’s “Galácticos” and an understrength Treviso.

There is still a lot of rugby to be played but, in the parlance of the American Presidential campaign, this result does limit the number of pathways to a top four finish. Maybe it’s time for Ulster to invest in some undersoil heating and drainage? Sitting six points ahead of where we are now would give the season a different look!

Still a chance to recoup five of those points in the re-arranged Zebre match next week (provided it’s not another mud wrestle) but at this stage of the season it’s so much better to have the points in the bag.

The first half was a dour affair for the rain lashed supporters; momentarily brightened by a glimpse of what we’ve missed from Jared Payne. The center cutting a fine line off Olding to score at the start of the second quarter. Pienaar added the extras and Ulster led 7 – 0. The pack were well on top, marching Treviso down the pitch prior to the score, plenty of time for more.

Unfortunately, things didn’t work out that way as Treviso continued to frustrate. In particular they had come to terms with Ulster’s driving maul, spoiling a series of drives as Ulster struggled with the surface. The teams turned round with the score unchanged.

The start of the second half was as scrappy as the first but the sin binning of Treviso’s Francesco Minto opened the door and Ulster raced through with tries from Sean Reidy and Charles Piutau, both doing well to find the line. Pienaar converted Reidy’s but missed Piutau’s effort from the touchline.

No worries, three tries in the bag and 22 minutes to go, surely the bonus point was only a matter of time!

Treviso had other ideas and they enjoyed their best period of play in the final quarter. A sustained attack on the Ulster line eventually led to, Ulster ex, Filo Paulo diving over a mass of bodies to score for the visitors. Ian McKinley converted as the score creaked along to 19 – 7.

Still ten minutes left but, with even Marcell Coetzee looking out of sorts, they lacked the composure to nab that vital fourth try, the game ending rather tamely as Ulster struggled to get out of their own half.

With three games still to be played today (Saturday) the Guinness PRO12 looks like this. 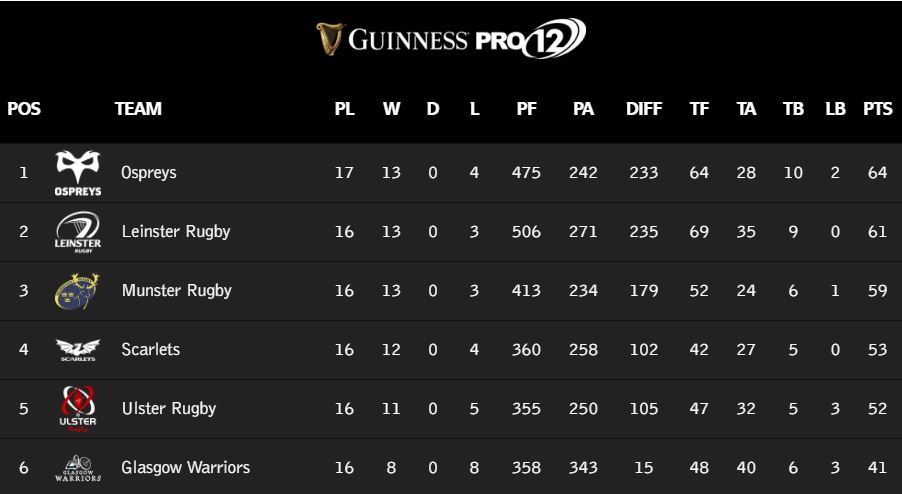