You are at:Home»Ireland»Wheelchair Rugby: Ireland prepare for Home Nations tournament. 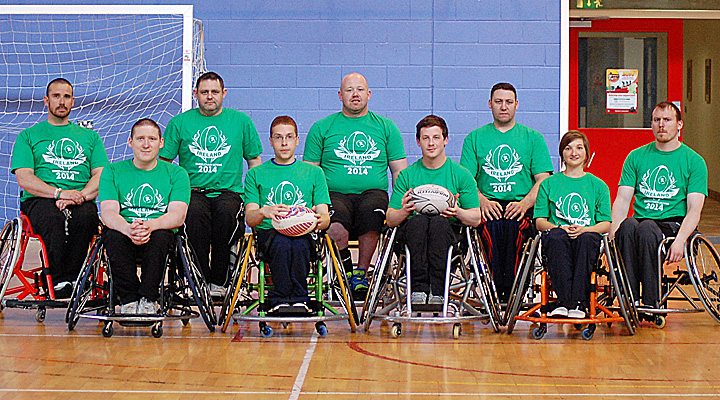 Following on from the successful inaugural Wheelchair Rugby 7’s Six Nations tournament last year the Home Nations have banded together to prepare for this year’s tournament their own warm up competition this weekend in Liverpool at the John Moores University IM Marsh Campus.

The competition, which kicks off on Saturday morning at 10:00am, will feature teams form Ireland, England, Wales and a mostly Scottish/English Barbarians side.

The competition will feature three rounds of two games with the winner being decided on a league basis.

It’s a hectic schedule with three 80 minutes games in two days and the Ireland team have been training hard over the last few months to perfect their skills. With competitive matches at a premium they recently organised a challenge competition where they put able bodied teams through their paces.

There will be another challenge competition, to assist in their preparation for the Six Nations on Sunday 29th June, open to all teams who want to give wheelchair rugby a go. Check out their Facebook page for details.

Wheelchair Rugby 7’s is as near a re-creation of Rugby Union 7’s as is possible, within the obvious limitations of a wheelchair, and is open to all disabilities as well as able bodied players.

The games last 80 minutes, have scrums, line-outs, rucks and mauls and the scoring is the same as union with tries, conversions, penalties and drop goals all possible, the ball being punted by the hand as opposed to the foot.

Due to the technical nature of the game there are two referees on the pitch at all times.

The game is all about timing and maintaining momentum, the key skills being the ability to keep the wheelchair rolling while using your hands to catch and pass the ball.

Tackling, which is full on contact between two wheelchairs, can be just as physical as the union game with big hits capable of knocking an opponent out of their chair a distinct possibility!

The Front Row Union in association with our print partners twentythreenineteen are pleased to have provided the Irish Wheelchair 7’s team with a set of tee-shirts for participation in this competition.

We’ll be covering this weekends competition in Liverpool with live updates so check out the site, Facebook and Twitter on Saturday morning for details.