Five years since the untimely passing away of Rosie Stewart. The team which she helped to found; brought the memorial Cup established in honor of her passion and dedication to the game home on Sunday.

On Sunday the 6th of April Cooke Ladies and the City of Derry clashed heads for a Cup which meant a momentous amount to both teams. As Rosie originated from Londonderry; The City of Derry Ladies felt a strong connection with the cup and also being in their first season the opportunity to take down the leading Ulster club was an especially appealing prospect. However, despite the geographical connection with Derry Rosie Stewart was a founding member of Cooke Women’s Rugby Club and Cooke was where she played out her rugby career. While people say ‘Home is where the heart is’…when in came to rugby, Cooke held Rosie’s heart and so it is proper that Cooke were victorious in the match in order to bring the trophy home in Rosie’s honor. 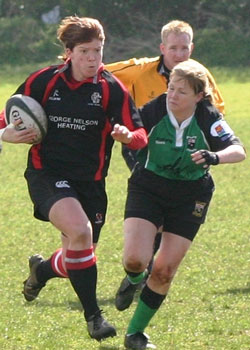 The Cooke team was confident and composed from the outset, having not lost a single game throughout the cup. Centre Heather Tomlinson conducted the first twenty minutes of the game; picking weaknesses in the Derry line up which she put both backs and forwards through as well as taking them on herself with her exceptionally deceiving dummy pass and effectual side stepping. It was fitting that out of this positive display of Rugby that the first of Cooke’s tries was touched down by outside centre and Skipper Suzanne Fleming who played with Rosie for Cooke, Ulster and Ireland. Using her knowledge, velocity and nimbleness of feet; Suzie was able to dance around the Derry defense from just within Derry’s own half before placing the ball over the line.

Amy Davies then used her outstanding pace to place the ball right underneath the posts. Despite solid counterattacking from the Derry pack, the Cooke forwards kept the pressure on for the remaining part of the first half, hitting up the field with relentless aggression with powerful runs from tight head Emma Lowe and fellow front row Lauren Day resulting in further try for the Belfast based team from speedy winger Laura Stewart. 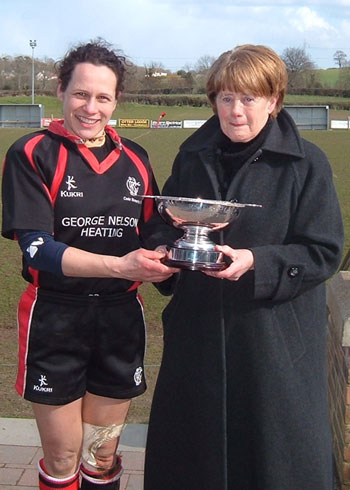 Commendation must go to the City of Derry for remaining positive in the second half and for continuing despite the mounting pressure from the Cooke team. Sturdy play was displayed by Lock and Captain Glenda Fleming and some courageous runs from backs Clodagh McClune, Mirranda Berner and Susan Kinney. Derry gained more possession in the second half. However, they could not pacify Cooke’s campaign to dominate the match and recommendation must go to Cooke Flanker Rachael Boyd who played passionately and with great fortitude, turning over ball and making some solid runs before Amy Davies went over the line for Cooke’s fourth try of the game. Combined with two conversions from Lock Lucy Fagan, Davies second try of the match brought the score to 26-nil; where it remained for the rest of the game.

Rosie’s mother and god daughter presented the cup to Cooke Captain Suzanne Fleming, who made an emotional acceptance speech of how proud she was of the whole squads effort to bring the cup home to Rosie own club as Rosie had been a dear team mate and friend who had toiled tirelessly with huge commitment and charisma in the cause of establishing and developing the women’s side of the sport in Ulster. Stating “. In her absence I hope the Cup is a lasting reminder to us all of the “Spirit of Rugby”.