You are at:Home»Club»Club Men»Energia AIL 1B. Malone 7 City of Armagh 22

By Editor on January 26, 2020 0 Comments
Malone's erratic season in AIL 1B continues with a 7 - 22 defeat by City of Armagh at Gibson Park
CLUB MEN ADVERTS

Report and pictures by Richard Owens.

Malone kick off and each team tests each other’s mettle, trying to settle into their patterns and impose their game plans but it’s Armagh who establish the better start.

The tempo is rapid, the ball recycled immediately from the breakdown. Fitness and tactical use of the bench will be critical if the whole game is played at this pace.

Mistakes from each squad see the ball change hands frequently and there is no score for the first quarter but it’s a dangerous tackle by Malone’s lock Azur Allison on Armagh’s big wing Andrew Willis that changes the game. With Allison sent to the bin and Willis back on his feet after his upending, Armagh crank it up and it’s not long before full back Tim McNeice draws first blood running an excellent line to score under the posts, his out half, Cormac Fox, easily adding the extra points.

Tim McNeice heads under the posts for the opening score.

The sin bin again proves lucrative for Armagh as the extra man sees both wings combine before Willis rounds the defensive line to get another five points as the conversion was missed.

Malone limp to half time without further damage to the score line and Chris Henry will needs inspirational words to get his team into this match.

He obviously had them as Malone shoot out of the blocks and play with speed and purpose that was absent in the first half, but ironically it’s Armagh who score first with Willis bagging his second with a strong finish, stepping the Malone defender to dot down in the corner. The tricky conversion is missed but now Armagh are 17-0 ahead. 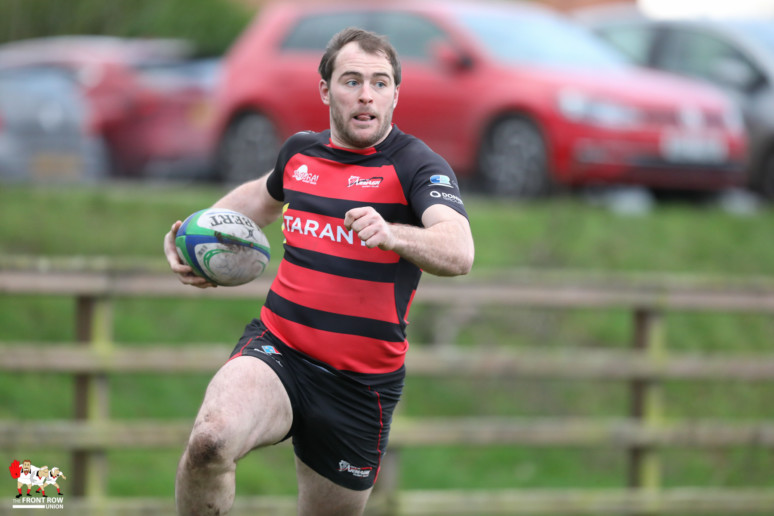 Andrew Willis heads for the line in the second half.

Malone’s endeavour is finally rewarded when Stewart Moore intercepts a ball during open play and sprints under the uprights, the extras added quickly as Malone hope to bounce back.

Armagh snuff out any hope of a revival, their superior possession affording quick ball to their backs leading to their 4th, and bonus point, try, this time for the left wing Shay O’Brien.

After the match we catch up with Armagh captain Robert Whitten.