Cooke and Grosvenor battled to a 24 - 24 drawy in this Championship 1 fixture on Saturday afternoon.
Club Men

By Editor on October 21, 2019 0 Comments
Cooke and Grosvenor battled to a 24 - 24 drawy in this Championship 1 fixture on Saturday afternoon.
CLUB MEN ADVERTS
PRINTS

Cooke must feel their pockets were picked as they left the field, heads bowed, with only a draw, having been in front nearly the entire match.

With strong sunlight dazzling the visitors, Cooke started brightly and after 10 minutes were rewarded with a try as the ball was spread from an attacking 5m line out and the full back crossed the line, the out half adding the extras. 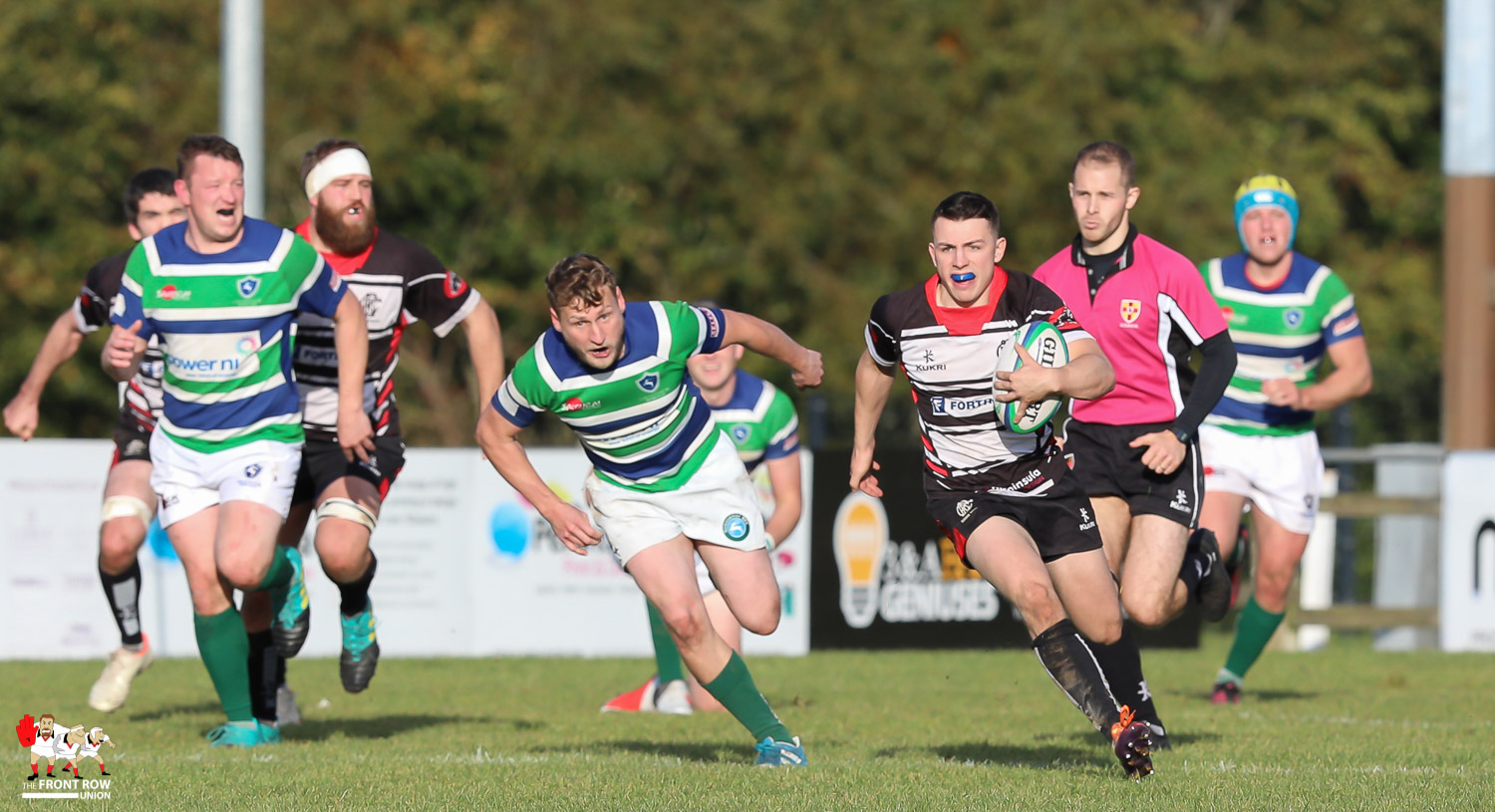 Cooke took an early lead in this cracker at Shawsbridge

A similar field position saw Cooke cross the whitewash again, this time the flanker feigned a pass and strolled through under the posts. 14-0 after 25 minutes.

Cooke’s dominant scrum kept the penalties coming and even on the occasion Grosvenor got the shove on, they were penalised for driving illegally. Another 3 points for the home team. 17-0. Cruise control for Cooke.

Things went from bad to worse for the visitors as the ref issued his first yellow, a team yellow, on 35 minutes and the prop headed for the bin.

This seemed to galvanise Grosvenor into action and despite their numerical disadvantage they got on the scoreboard with the left wing showing great strength to fend off two defenders and touch down in the corner. Conversion missed left the half-time score at 17-5 in Cooke’s favour.

I would love to have heard the Grosvenor coach’s half-time team talk as they flew out of the blocks at the restart and made Cooke look like rabbits stunned in headlights – perhaps it was that strong sun.

Two tries, one converted and we were suddenly at 17-17. Cooke did have a chance to get back in front with a shot at goal but the kicker managed to hit the left upright, the ball then tumbling onto the crossbar before falling pitch side and kicked clear. You probably couldn’t do that if you tried a thousand times and at this moment you felt the match was going Grosvenor’s way.

No quarter was given and tackles were ferocious as the half wore on, however a high one saw the ref show the second yellow for Grosvenor’s lock. Cooke didn’t capitalise as it wasn’t long before they had one of their own bounced into the bin for tackling a man in the air. Yellow card number three.

There was now some space on the pitch and Cooke worked their way into the oppositions 22. A series of superb scrums saw 3 penalties and the ref’s patience snapped as he ran under the posts to award the penalty try on the 78 minute. Cooke celebrated – prematurely as it turns out.

With every fibre Grosvenor assaulted the Cooke line from the restart. Frantic try line defending from exhausted Cooke players saw penalty after penalty and the busy ref had no choice but to send two Cooke players to the bin.

Grosvenor smelt blood and sent the ball wide and although their wing was perilously close to the touchline he was aware he needed to be closer to the posts before touching down. The home team felt he had strayed outside the in goal area as he fell to the turf but the ref was not for budging.Try awarded.

Plenty of pointing as Grosvenor’s final try is awarded

Huge credit to the Grosvenor place kicker as he slotted over the conversion despite the Cooke players hurtling towards him as he took his shot.

All over. 24-24. What drama and excitement watching local club rugby.