Ever wondered what the family and friends of the players get up to when supporting Ireland players all over Europe? Sara Turkington, sister of Ireland U18 7s player Lucy Turkington lets us know what they got up to in their recent trip to Poland for the Rugby Europe U18 Women’s 7s Championships.

We landed in Poznan, Poland on Thursday evening after a 2 hour flight from Dublin. Taxi’s were organised for the families to the hotel ( all families stayed in the same hotel) in Poznan. After checking in, I dropped my bags in the room and then went to the Old Town Market for dinner. The atmosphere for a Thursday night was amazing.

The parents and families had a free day on the Friday before the U18 Championships began. This give us a chance to explore the beautiful city of Poznan. First stop was the Old Town Market and it was even more incredible in daylight. 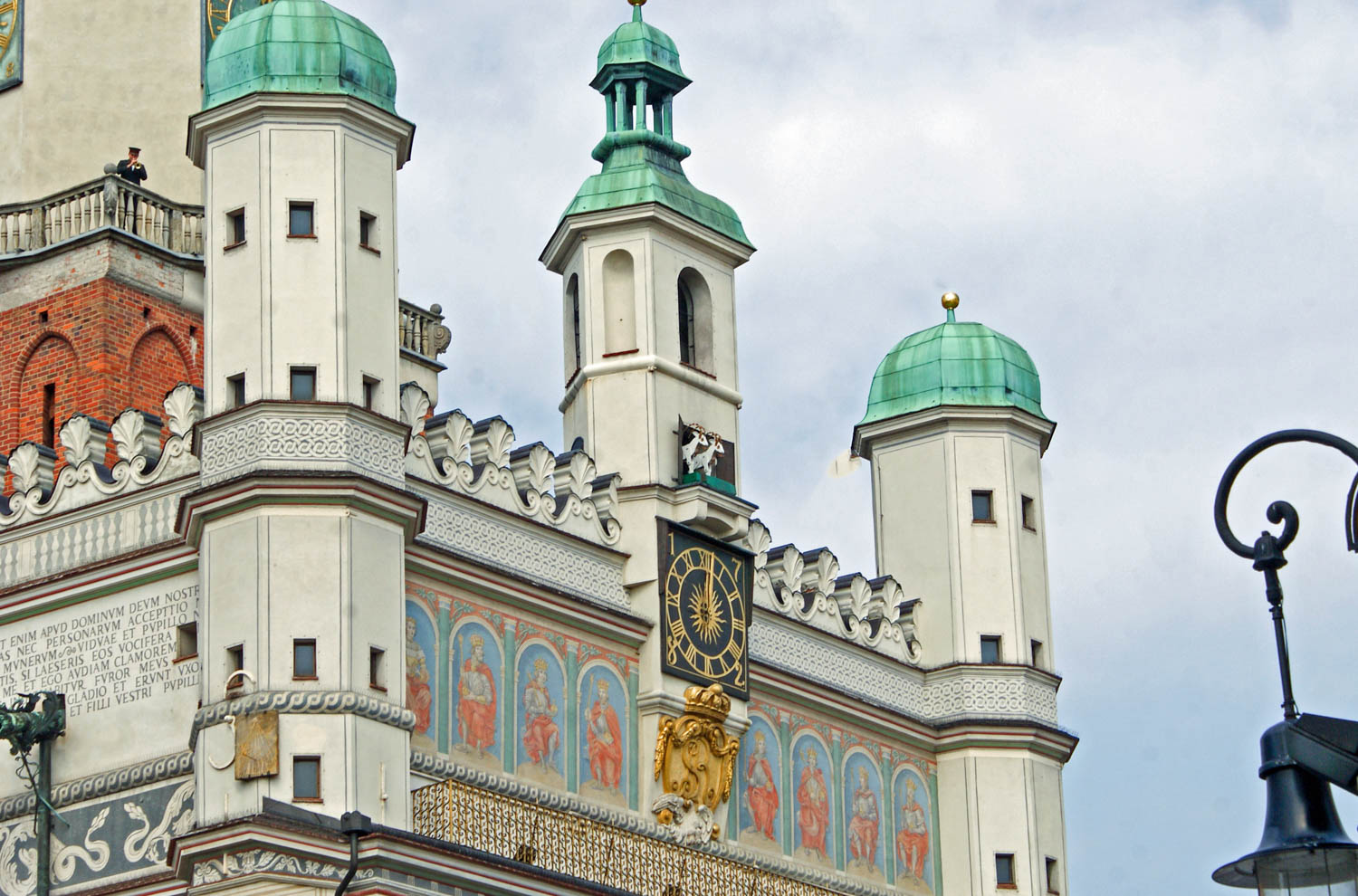 At 12 noon, in the centre of the square, two iron goats appear above the clock on the Ratusz Poznanski and butt heads to the sound of the bugle horn. This happens every day and has done so from 1551, the goats butt heads 12 times to strike the midday hour.

It is a lovely city with everyone exploring different parts of it on the Friday. 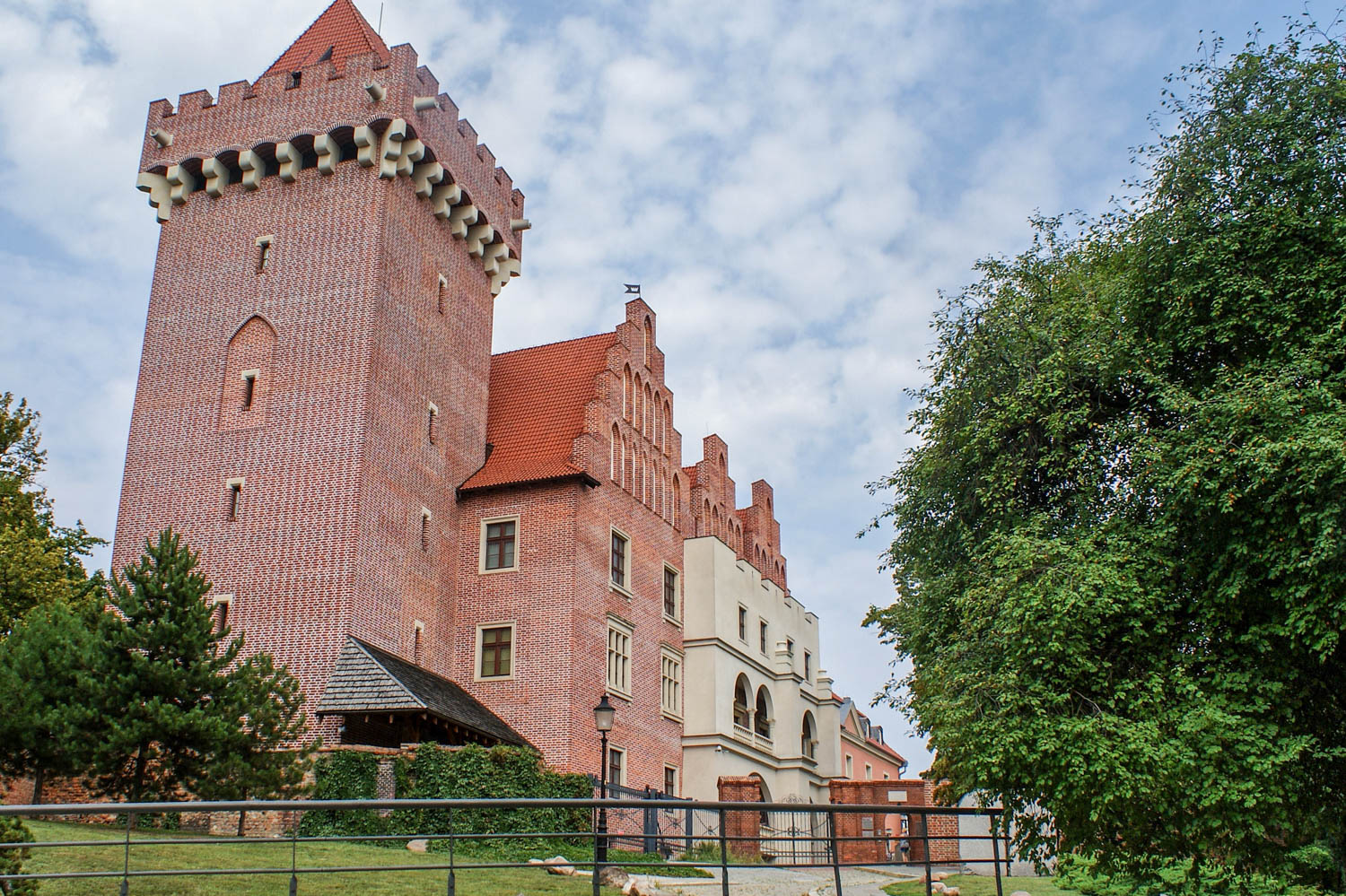 A bus was organised, with the help of the hotel, for the supporters on Saturday morning to take us on the hour long journey to Jarocin for the U18 7s Rugby European Championships.

The girls had three games each day, during which everyone sought shelter from the 33C heat in the covered stands, though I chose to go pitch side to take photographs of the action.

The girls matches on the Saturday were against Georgia, Latvia and Scotland who were in the same pool as the Ireland team. The girls started strong with wins over Georgia and Latvia.

Unfortunately in the final match of day one, the girls couldn’t overcome Scotland with two late tries from the Scots to secure victory.

All the supporters and parents boarded the bus back to Poznan and began the working out of the quarter final fixtures for the following day. After a lot of discussion and confirmation from the Irish camp the fixtures were set with Ireland facing England the next morning in the quarter finals.

Upon arrival back at the hotel everyone had a quick change and went for food, but the tiredness got the better of some people and they had an early night. Others enjoyed the hospitality of the hotel bar and some comfy seats to 2am.

We all boarded the bus on Sunday morning, compared to the day before this bus had no air conditioning and it was definitely hotter than the Saturday. Any windows that were on the bus were opened as far they would go but that still didn’t help with the heat.

The Irish girls had a midday kick off time so that give us a chance to settle into our seats and watch the first three cup quarter finals (France v Spain, Scotland v Wales & Russia v Czechia). The French, Welsh and Russians all going through to the semi finals. It was then the turn of the Irish against an English team that hadn’t conceded any points the day before.

Ireland got on the score sheet first with a try from Beibhinn Parsons with Lucy Turkington converting. Soon after England replied with a try of their own leaving the score at half time 7-5 to Ireland. The game was tight but England then added two more tries on 11th and 13th minutes. They then added a further try just before the full time whistle leaving the score 22- 7.

This loss  put Ireland into 5th – 8th place playoffs and first up was a match against Czechia. 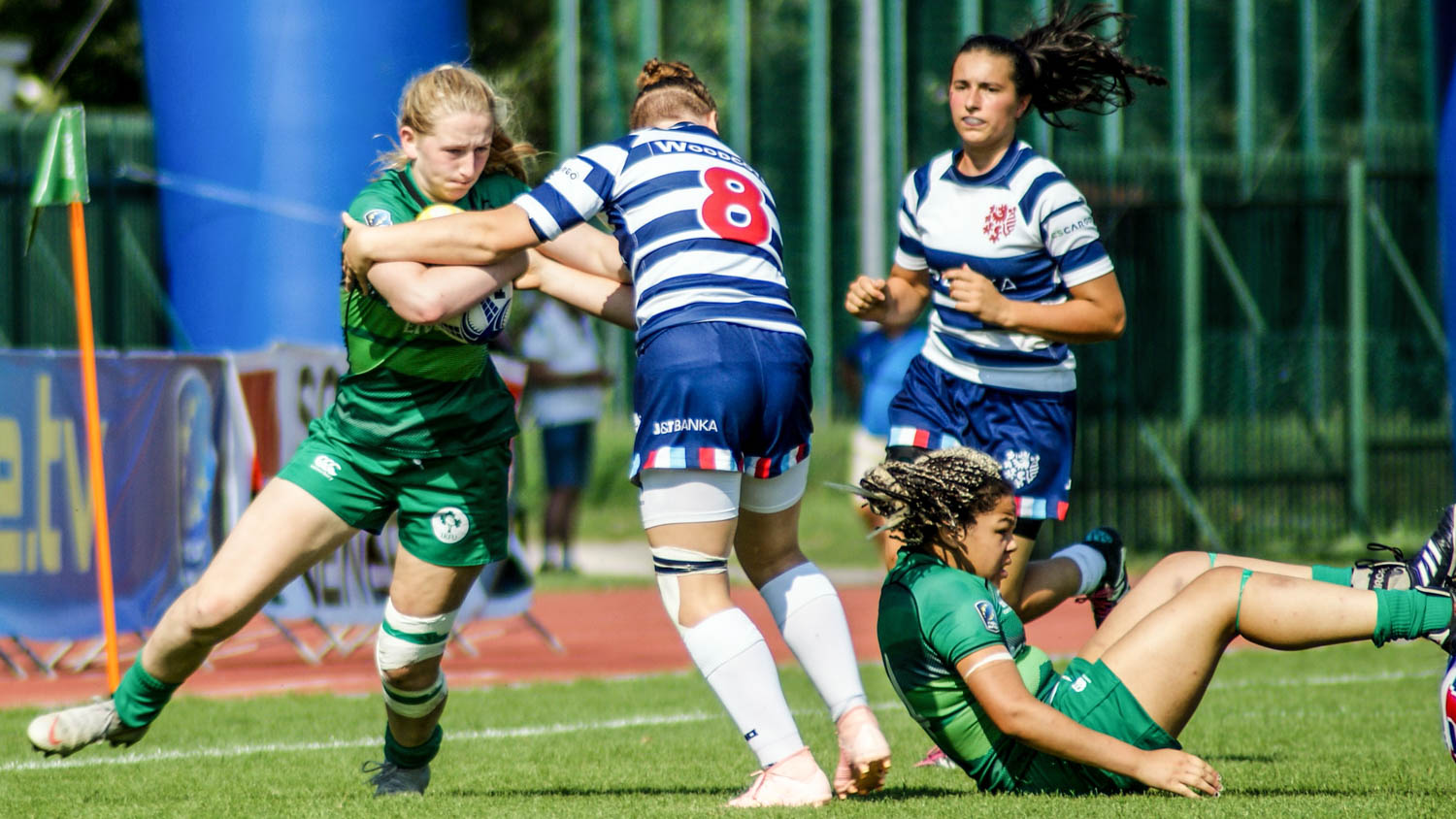 The Irish supporters had fallen in the Czechia supporters before the match whilst cooling off with some refreshments. The craic was good with some red and green flares being let off.

From the kick off the girls held on to possession with brilliant build up, this allowed Mya Alcorn to go over in the corner for the first try of the match in the first minute. Lucy added the conversion. Czechia responded with a try of their own two minutes from the half time. Ireland bounced back with tries from Beibhinn and Meabh McElligot. The score was 17 – 5 at half time.

Ireland pushed the Czechia team back to their own try line in the second half but a quick tap from a penalty saw a Czechia player sprint the length of the pitch to score at the other end. This give the girls in blue & white some confidence but the girls in green defended well.

This result meant the girls faced a rematch with Scotland for 5th or 6th place finish.

The Ireland team came out determined to avenge their score from the previous day, and this showed when Beibhinn scored 30 seconds into the match.

Ireland kept Scotland in their own half for the next 5 minutes. The Scottish went under the posts on the half time horn but Mya Alcorn and Chisom Ugwueru held the player up and the try was not given.

Ireland restarted the second half to the chorus of the Fields of Athenry. Scotland put the pressure on straight from the kick off, but Beibhinn spotted a gap and sprinted from try line to another to add her second try of the match. The Scots responded almost immediately after their number 12 scored their first points of the match. The conversion was kicked.

Ireland set up a ruck from the kick off with Ava Ryder firing out a pass to Beibhinn who saw a gap out wide and backed herself to score. Ava added the conversion. 21 – 7 to Ireland with 1 min and 30 secs to play. Scotland pushed hard to get a try but a knock on in play on the horn was awarded with a scrum to Ireland. The ball came out of the scrum and was passed to Grace Browne – Moran who booted the ball into the stands to give the victory. Ireland finished 5th out of 16. 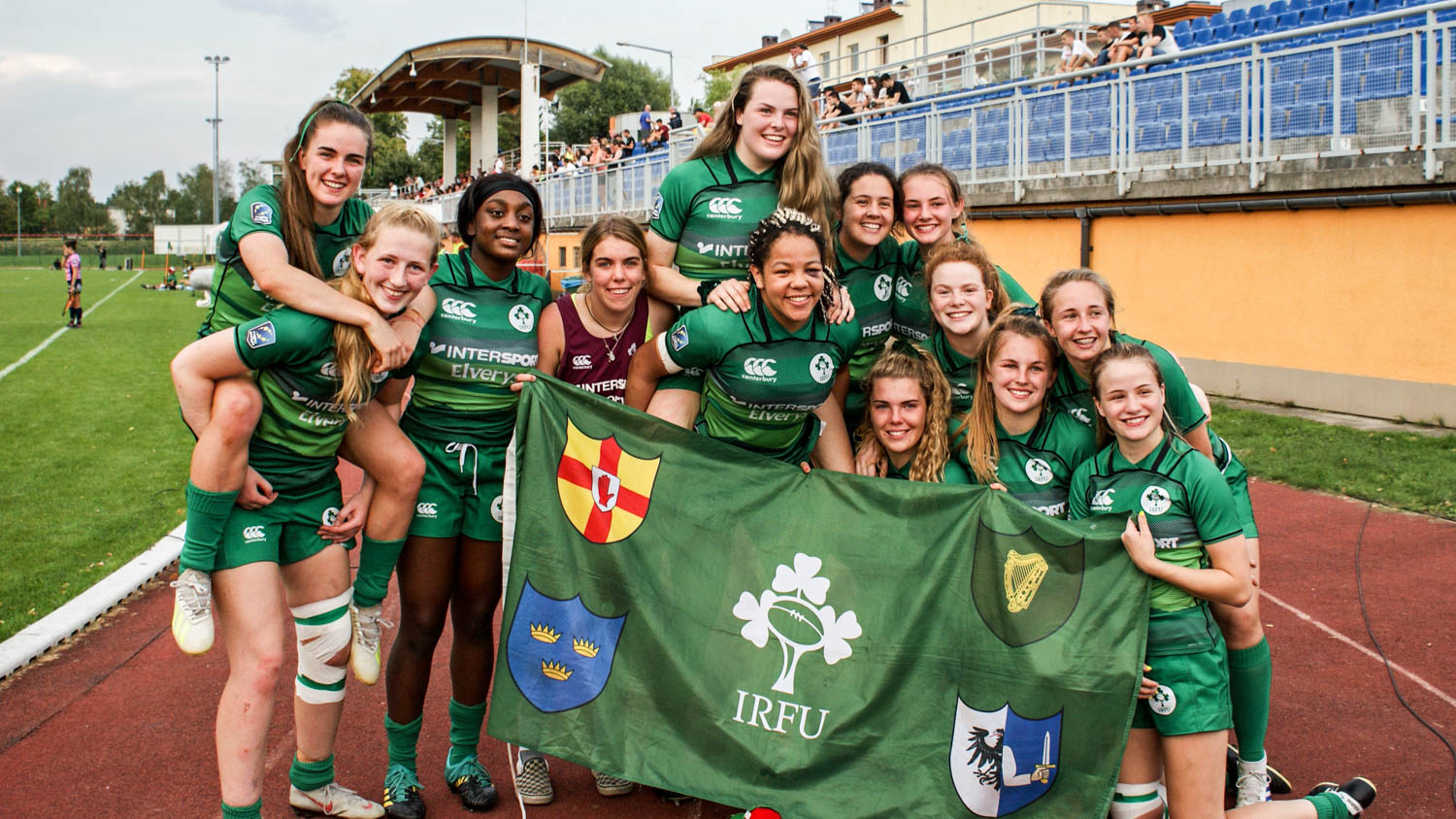 The Irish supporters made their way down to pitch side to congratulate the girls and take some photos. The girls went to the ice baths and we watched the cup final between France and England. This was brilliant match to watch with France winning 29 -10.

With little or no voice left the Irish parents and families boarded the bus back to Poznan. It was a very quiet bus back.

Once we got back to the hotel, a few people stayed to eat at the hotel, while others headed into the Old Market Square. Everyone gathered back at the hotel for a drink before heading to bed.

A well deserved lie in on the Monday and some breakfast before the long journey home to Dublin. Again the hotel had very kindly organised taxi’s for us back to the airport after checking out. We got through security quickly before the teams arrived for their various flights home. Then it was time to spend any left over Zloties (polish money) before boarding the plane home to Dublin.

All the Irish parents and families would like to thank Hampton Hilton Hotel, Poznan staff for their brilliant hospitality throughout the weekend and helping to organise transport to the stadium in Jarocin and to the airport.