You are at:Home»Ulster»Ulster Men»Ulster Rugby: Who did what 2017-18
Ulster Men

Ulster recorded victories in their first five games including a thumping defeat of Cheetahs and a last gasp win over eventual finalists Scarlets. While Ulster hit a blip in Parma against Zebre they bounced back with wins against Connacht and Wasps. Performances were dipping however as Southern Kings got their first two match points against Ulster while Andrew Trimble and Christian Lealiifano saved Ulster’s skins in two consecutive weeks against Treviso and the Dragons respectively.

Defensive standards slipped as Ulster conceded 18 tries in the four matches over the Christmas period and while this included an away victory against Harlequins, which ranked as a personal highlight. The run of form culminated in the dismissal of Les Kiss after a hammering from Wasps which knocked the province out of the Champions Cup. A thumping over Southern Kings came next before three losses on the trot over the Six Nations period.

After the announcement of Jono Gibbes’ departure in the summer, Ulster finished the season unbeaten including good victories over Edinbuirgh and Glasgow and a draw at Thomond Park against Munster. Despite a solid run of form, Ulster failed to pip Edinburgh to the 3rd play off spot in Conference B and had to rely on a “playoff” victory over Ospreys to secure Champions Cup rugby for next season.

It can’t be denied that it has been a challenging season both on and off the pitch. However, we have seen a new generation of players make their first Ulster starts. Aaron Hall, Greg Jones, Angus Curtis, Matthew Dalton, Jonny Stewart and Tom O’Toole have all featured for Ulster this season while Nick Timoney, Matthew Rea and Johnny McPhillips  quickly established themselves as first team players in the closing rounds of the league.

As far as being considered the “worst season ever”, it may well have been in terms of off-field activities but it terms of results it shows an improvement over 2016 – 2017 with the win % rising from 58.93% last season to 64.29% this season thanks largely to two additional wins in Europe.

However, Ulster still failed to qualify for any knock out stage of any competition for the second season on the trot. The season was again defined by fine margins, a couple of lost bonus points in Europe and a one point home defeat by Edinburgh in the PRO14 making the difference between success and failure.

It wasn’t a great season but it wasn’t horrendously bad and it shouldn’t take much to turn things around, though our stated aim of World Domination may take a little longer!

What needs to be done?

Last season we stated that Ulster’s failure to focus on the grass roots was the main cause of thier downward spiral. Money and attention has been diverted to the senior team for many years, at the expense of the Academy, other representative sides and the club system, leaving an ivory tower built on decaying foundations.

Without the clubs there is no IRFU and the clubs need to be at the forefront of the pathway for players to get into the senior team. We’ve been promised root and branch reviews in the past but they were never completed.

Hopefully the new CEO will realise that Ulster needs to prioritise these pathways if a sustainable improvement is to happen.

Who’s been doing what?

Ulster Rugby named 50 players in their squads this season with 48 getting game time, the two unused players being Jack Regan and Tommy O’Hagan. The breakdown of players by place of origin is as follows:

This gives nothing more than an indication of our internal sustainability (or our growth from the grass roots up if you like). We are delighted to have, and welcome, every one of our players.

However the representation of players going solely through the Ulster system has fallen from last season’s 49.4% to 44.9% this season. It has obviously been affected by the unavailability for selection of Paddy Jackson and Stuart Olding but I don’t know if this is it bottoming out. It is possible that we could see the Leinster origin players increase to 20% for a season or two before Ulster origin players playing time starts to rise.

These figures are derived from the total minutes played by each player which is shown at the end of this article.

The top six players for minutes played are shown below.

I’d guess that over the course of a  28 game, 40 week season you would have an expectation of having your core players for 60% of the time (1,344 minutes) plus they would be involved in international competition for another 4/5 games. Only 9 Ulster players clocked up 1,344 minutes or more and of those only Jacob Stockdale ( 7th place) was regularly playing for Ireland.

I know it’s a hugely physical game now but I don’t think that an expectation of an average of one game every 1.8 weeks is unreasonable but very few of the Ulster squad hit this sort of level and only 2 of the Ulster origin players (Stuart McCloskey and Jacob Stockdale) were in the top 10 of minutes played.

I wouldn’t be surprised if Kiss and Gibbes were complaining about player availability in their exit interviews and while many supporters complain about the game management by the IRFU of the centrally contracted players the bigger issue appears to be fitness. It’ll be interesting to see if this changes in the coming seasons given the upcoming changes in the Strength and Conditioning and Physio programmes.

The Top Ten for points scored is shown below.

Unsurprisingly, John Cooney leads the way after effectively taking the place of Ruan Pienaar and Paddy Jackson from last season.

Ulster scored 84 tries in total including 3 penalty tries, the backs were responsible for 59 and the forwards 25.

Worthy of note is that the vastly underutalised Craig Gilroy tops the try scoring with just under a try per 80 minutes played and Andrew Trimble mainted a impressive strike rate of 0.75 tries per 80 min despite limited use.

Top forward try scorers are Nick Timoney with 5 in 1359 minutes and Sean Reidy with 4 in 1370 minutes of play.

FRU Favourite Jacob Stockdale comes in at 0.58 tries per 80 min for comparison.

There is more to playing rugby than scoring tries, so who has been putting in the hard work to get Ulster into those scoring positions? We look at the Top Ten for carries, meters made, defenders beaten and clean breaks.

Despite what most people would have regarded as an indifferent season Charles Piutau still managed to top the meters made chart by some distance, clocking up 1,700 meters and beating 83 defenders. It is down on the 2,067 meters made last year but it’s still an impressive performance and his 312 carries are going to be hard to replace next season. However, the under used Gliroy is capable of performing the same role having topped this chart two seasons ago with over 2,000 meters.

Stockdale made the most meters per carry and McCloskey made the hard yards in the middle of the pitch averaging 3.5 meters per carry for his 1,056 yards in heavy traffic. The astute Darren Cave looks like he could have comfortably shared more of the midfield burden if he had got more game time.

Of course attack is only one side of the equation, we now have a look at the defensive aspects of the game starting with tackles.

Alan O’Connor comes out on top with most tackles made and the big second row averaged 11 tackles per 80 minutes on the pitch. As expected the forwards bore the brunt of the tackling duties with Rob Herring, Nick Timoney, Wiehahn Herbst, Sean Reaidy and Iain Henderson all averaging 11 or more tackles for each 80 minutes on the pitch.

Stuart McCloskey is the highest placed back with an impressive 213 tackles giving him an average of 9 per 80 mins.

Turnovers are often cited as the most important aspect of the game and a well timed turnover can change the whole pattern of the game.

There are a few surprises here, not least the exceptional figures from Jean Deysel of 2.2 turnovers per 80 minutes played. It’s a pity we couldn’t have got him on the pitch more often!

Stuart McCloskey and Jacob Stockdale are also worthy of note though Stockdale’s turnovers do include his intercept chances. Luke Marshall shows the second highest average albeit over limited game time.

Henderson and Herring bolster the forwards performance but the back row specialists of Reidy and Timoney are lower than I would have expected.

A bit subjective this one but we’ve included it in the overall stats as it shows who has been making the telling breaks throughout the season.

Unsurprisingly scrum half’s John Cooney and Paul Marshall top the table with Marshall showing a remarkable “snipe” rate. Darren Cave and Tommy Bowe show their eye for the break but perhaps we’ve found the area that Stuart McCloskey needs to improve if he’s to get the international recognition he richly deserves.

FRU Player of the Season

We’ve selected six Players to contend for the Player of the Season below. All have completed the targeted 60% of game time.

Players unlucky to miss out include Darren Cave, Craig Gilroy, Ian Henderson, Rob Herring and Jean Deysel who have all produced exceptional stats but haven’t had the game time.

Going on stats alone it’s been a exceptional season for Stuart McCloskey who is the only player who appears in the top ten in every one of the above tables. He is in the top three in four of the categories and in any other season he would have been a shoo in for Player of the Season.

However, stats aren’t everything and the contribution and on field leadership given by John Cooney cannot be overlooked. It’s been a turbulent season for Ulster Rugby, both on and off the pitch, but Cooney stepped into the largest boots possible, following the departure of Pienaar, and he made the boots his own.

It’s been an extraordinary debut season for John Cooney, and for that reason he is The Front Row Union Player of the Season 2017 – 2018. 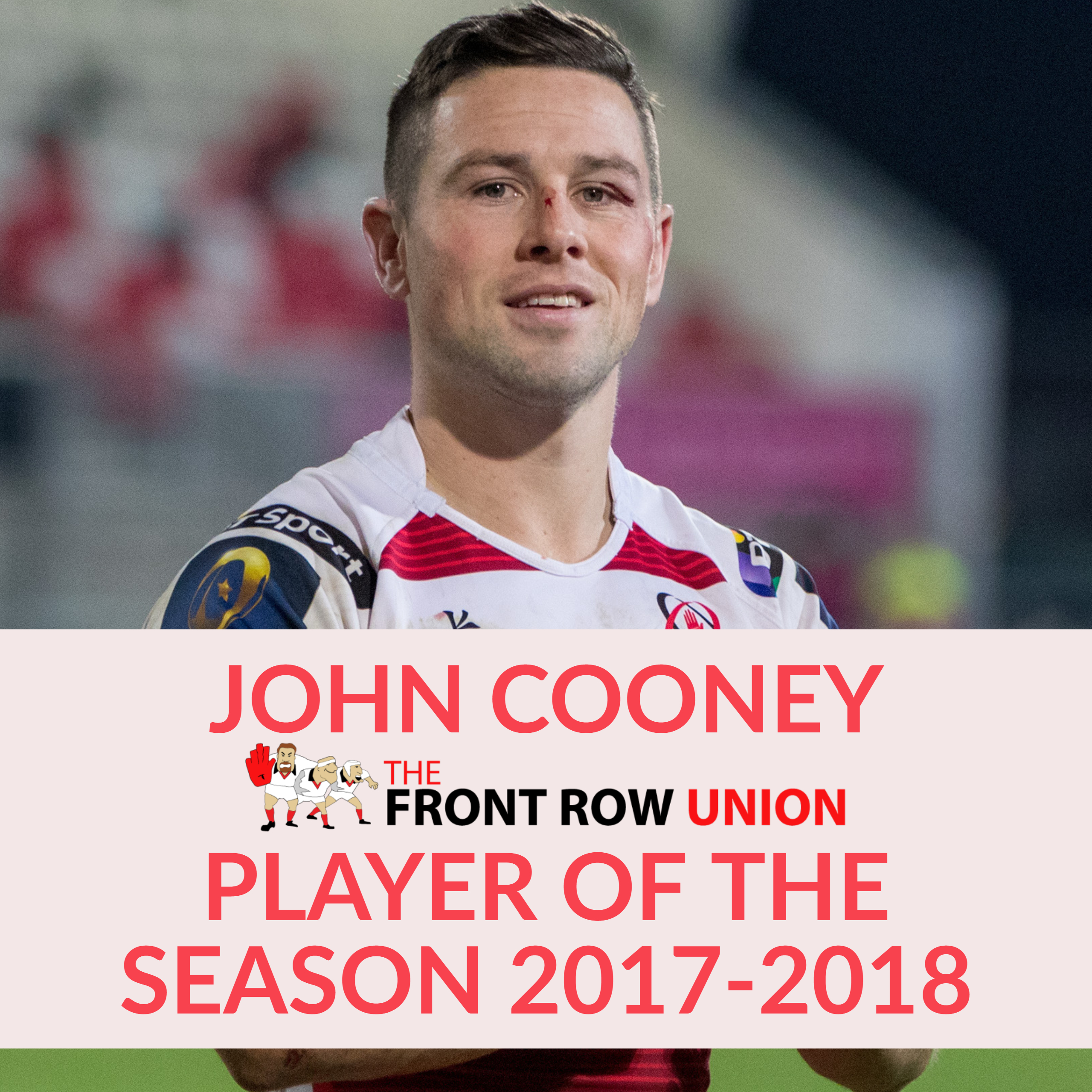