U20 Championship: Who did what?

We have a look at the statistics behind Ireland U20’s recent 2017 World Rugby U20 Championship campaign in Georgia. Who did what and how did the Ulster contingent perform?

Looking at the results it would have to be regarded as a disappointing tournament with early losses to Italy and Scotland followed by a drubbing by New Zealand putting Ireland in the bottom third of the playoff phase. Wins against Samoa and hosts Georgia did restore some pride but it was a long way short of the performances by last year’s cohorts.

There were, however, some mitigating factors, not least the decision by the IRFU to withdraw the U20 Interprovincial tournament last season. This resulted in a smaller player pool from the Six Nations which in turn was heavily decimated with late withdrawals and a degree of petulance from the powers that be.

Add the fact that the coaching ticket changed at the end of the Six Nations, with head coach Nigel Carolin taking up a senior post at Connacht, and we were left with a build up consisting of a new coaching ticket trying to find enough fit and available players to make up a competitive squad.

The net result was that the new coaching team had to dip into the U19 set-up and there will be twelve players, out of the 32 players used this tournament, who will be able to return next season, including Ulster’s Jonny Stewart, Angus Curtis and Mark Keane,

Ireland were also unfortunate to meet a resurgent Italy and Scotland who were able to build on their Six Nations squads, with the inclusion of more experienced players, just as Ireland reduced the experience pool by the withdrawal of key players such as Ulster’s Johnny McPhillips and Rob Lyttle alongside Jordan Larmour, Tommy O’Brien, Bill Johnston, Cillian Gallagher and Tadgh McElroy.

After the Six Nations, I would have put Ireland in the 5th – 8th category for this tournament, but given the issues raised above a 9th place finish is probably the best they could have hoped for so we’ll change our assessment of the tournament from disappointing to OK.  😯

However, from an Ulster Rugby perspective, it’s another disappointing level of representation with the percentage of minutes played by the Ulster contingent continuing to drop.

Ireland U20: Percentage of minutes played by Province 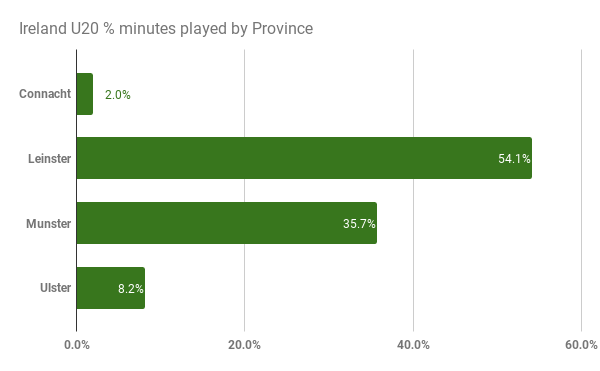 Leinster continue to be the dominant force in U20 Rugby with Ulster coming in a distant third accounting for just over 8% of the minutes played. This is down from the 12.9% minutes played in the Six Nations.

The key Ulster performer was Jonny Stewart who clocked up 206 minutes throughout the tournament with Marcus Rea (injured) adding 104 minutes, Mark Keane (late call up) 87 minutes, Peter Cooper 75 minutes and Angus Curtis putting in an impressive 16 minute cameo against Scotland before leaving the tournament due to a concussion.

The minutes played by all the players in the tournament are shown below.

Ireland U20: Minutes played by Player 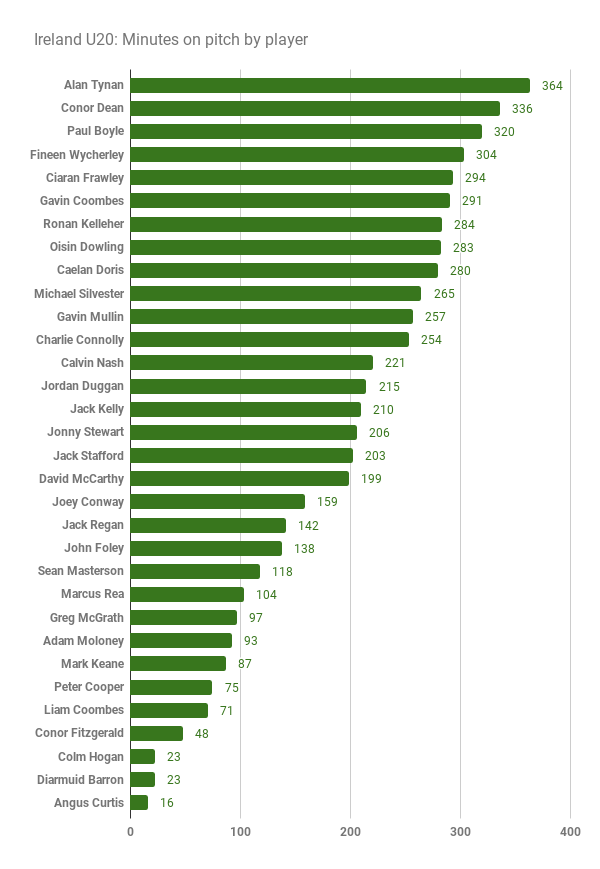 The key players Tynan, Boyle, Wycherley, Frawley, Gavin Coombes, Kelleher, Dowling and Dorris all came from the Six Nations Squad with Conor Dean and Michael Silvester being the two U19 call-ups that made the most impact through minutes played. 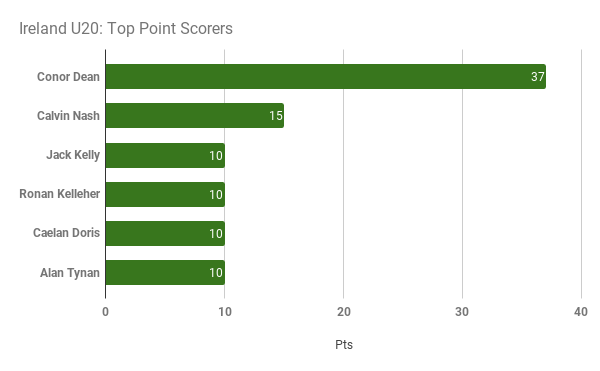 Unsurprisingly out-half Conor Dean ended the tournament as Ireland’s Top Scorer with 37 points made up of 11 conversions and five penalties.

Calvin Nash topped the try scoring table with three out of the total of 16 with Jack Kelly, Ronan Kelleher and Caelan Dorris all contributing a brace apiece. Alan Tynan made the top six with a try, a penalty and a conversion.

Of course, there is more to the game than scoring and World Rugby have kindly provided Stat Sheets on all of the matches showing Ball Carries, Meters Made and Tackles Completed. Unfortunately, they only show the top three players from each team in each category so while it doesn’t give a true total of work done throughout the tournament it does give an indication of the top performers.

We’ve summarised these below.

Ireland U20: Top Meters Made by Opposition.

So there you go, more stats than you could shake a big stick at. All that is left now is for us to declare our Ireland U20 Player of the Tournament, and I know all the players (and a few parents) can’t wait to hear that one!  😆

Ireland U20: The Front Row Union Player of the Tournament

Before we get to our decision there are a couple of matters I’d like to go through.

The first is the conditions. Most of the Ireland matches were played in temperatures around 30 deg C and as someone who sat on the sideline taking photographs, I found them challenging enough so goodness knows the extra effort the lads had to put in.

In all matches, including the drubbing by the hugely impressive All Blacks, the players put in a huge effort with three of the games. Italy, Scotland and Georgia, going to the wire. They can count themselves unfortunate that they only came out on top in one of these three matches.

Secondly, though none of the Ulster players made it into any of the Top Three performers in the above, apart from Marcus Rea sneaking in for tackle count against Italy, I have to say that I was generally pleased with their performances despite their limited game time.

Jonny Stewart will be pleased that he just about edged a couple more minutes than Jack Stafford in the battle for scrum-half though this one could have gone either way.

Marcus Rea looked to be making inroads in a competitive back row until he got injured against New Zealand and Peter Cooper was particularly pleased to pick up a try against Samoa after a long comeback trail this season.

Despite only playing 16 minutes, against Scotland, I was hugely impressed by Angus Curtis’ cameo and would have loved to have seen more of him but his concussion in that match ruled that out.

Finally, late replacement Mark Keane slotted into the left wing seamlessly when called into action, at short notice, against Samoa and Georgia. Showed a lot of maturity against Georgia in a rather feisty game, Definitely one to watch.

So with that out of the way, we can get to our Irish Player of the Tournament, and there are a few contenders. The decision is not only based on the above stats but on the number of times their faces appear in key areas of the pitch in the thousands of photographs that we have taken during this tournament.

Gavin Coombes, Caelan Doris and David McCarthy are all worthy of mention for appearing in all three of the above stats and they appeared in plenty of photos as well throughout the tournament. Michael Silvester and Alan Tynan both made plenty of meters throughout but you’d expect that from the back three and, the other back three regular, Calvin Nash chipped in with three tries.

Conor Dean kicked well to accumulate his 37 points but our vote goes to the player that helped guide this group through a difficult tournament and who contributed hugely with over 50 tackles, at least 22 carries and a try against Georgia, none other than Captain Paul Boyle. 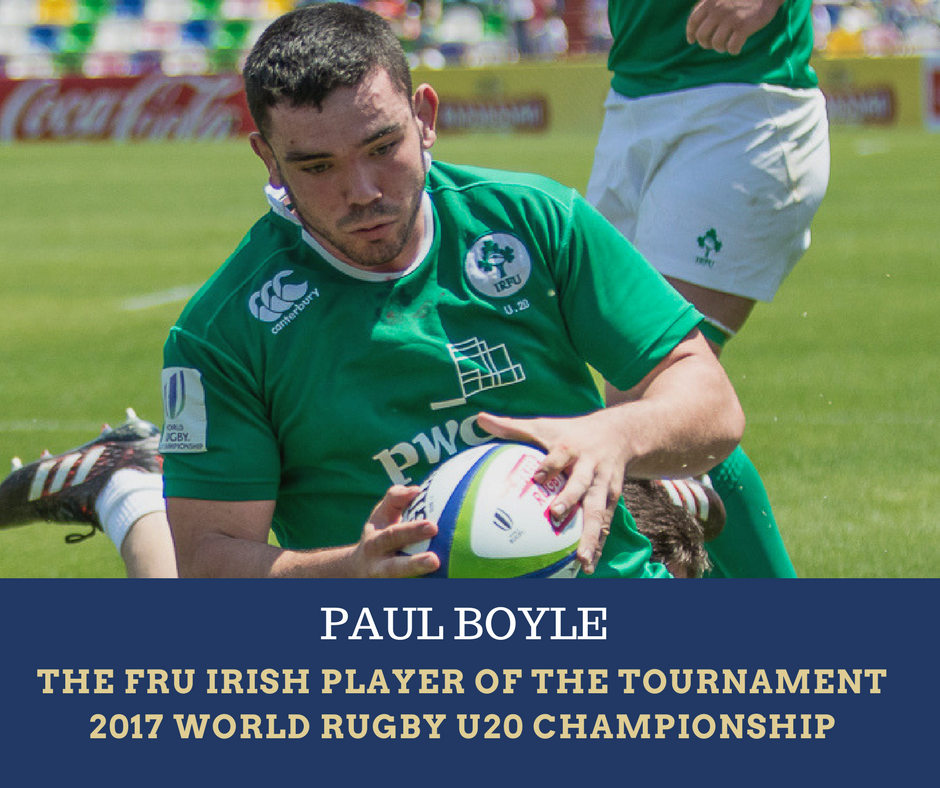