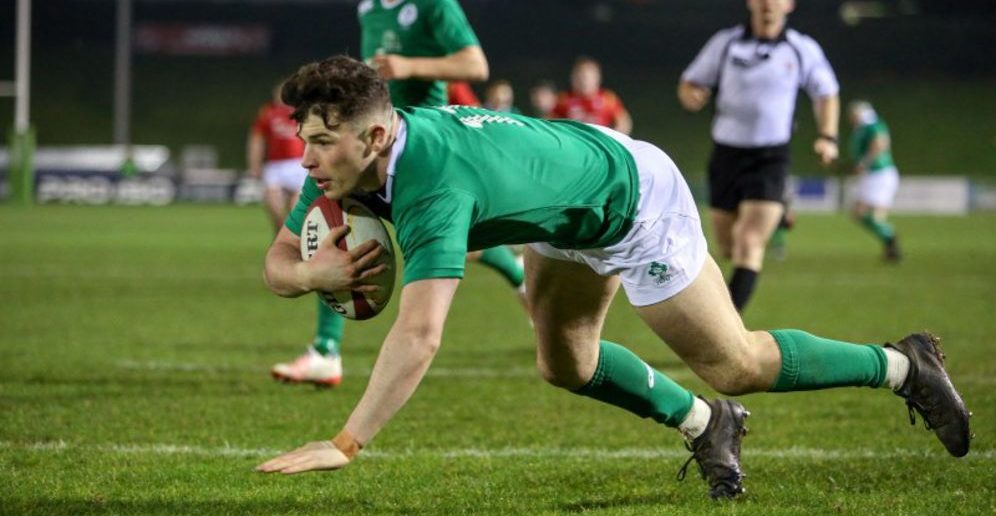 Calvin Nash goes over for Ireland's opening score against Wales.
U20 Six Nations

By Editor on March 12, 2017 0 Comments
Calvin Nash goes over for Ireland's opening score against Wales.
ADVERTS

Wales led 27 – 13 shortly after the break only for the Irish youngsters to pull it back to 27 all within twelve minutes of the restart. Unfortunately Ireland were unable to sustain thier revival and a yellow card for Conor Fitzgerald on the hour mark saw the Welsh get back on top. Late tries by Kieran Williams and Jack Pope consigning Ireland to their first defeat this season.

A second minute penalty by Welsh out half Ben Jones gave the home side an early lead. However, Ireland responded almost immediately as captain Calvin Nash outstripped the Welsh defence to score in the left corner. Bill Johnston added the extras to give Ireland a four point lead.

In a whirlwind first half the scores came thick and fast as Wales replied through Corrie Tarrant and Dane Blacker, both converted by Jones, before Bill Johnston replied with two penalties to take the score to 17- 13 with minutes to go to the break.

However a late score by the impressive Kieran Williams, converted by Jones, extended the home sides lead to 24 – 13 at the break.

Jones added another penalty shortly after the resumption, to push the score out to 27 – 14, before a forwards inspired comeback, with tries from hooker Tadgh McElroy and wing forward Paul Boyle, both converted by Johnston, leveled the score at 27 all with over 25 minutes still to play.

The Welsh responded well and a piece of quick thinking by Welsh scrum half, Blacker, resulted in replacement Conor Fitzgerald getting yellow carded after Becker invited the tackle with a quick penalty tap.

Wales scored almost immediately with Williams grabbing his second score of the match, Jones again converting and the home side wrapped it all up with a late converted try from Jack Pope to secure the win.

A 33 – 5 win for England against Scotland and an 13 – 18 win for France in Italy means that England have the U20 Six Nations Championship wrapped up before the teams go into the final weekend. However I don’t think it will dampen the Irish lads enthusiasm too much when they host England in a double header with Ireland Women at Donnybrook on Friday evening.