The Women’s AIL was already hit by the weather before recent postponements. As it stands there are two full weeks of the campaign to complete plus a couple of re-fix matches.

The final round is scheduled for 4th April, how likely that is is anyone’s guess.

There were three games played since our last Week 12 Wrap and you can view two of them below.

UL Bohemian were the busiest side also managing to fit in their Week 12 refix against Galwegians, the results from all three matches below.

Bohs certainly had an incentive to fit in the two games with the wins giving them an unassailable lead at the top of the table. Railway are secured in second place but there is still a bit of work to be done before their opponents can be decided for any prospective play-off matches, should they be played.

At the minute Blackrock have edged above Old Belvedere to complete the top four and it’s likely that this would be the finish at the end of the season. However, Suttonians still have an outside chance to get into the mix should their three postponed matches ever be played. 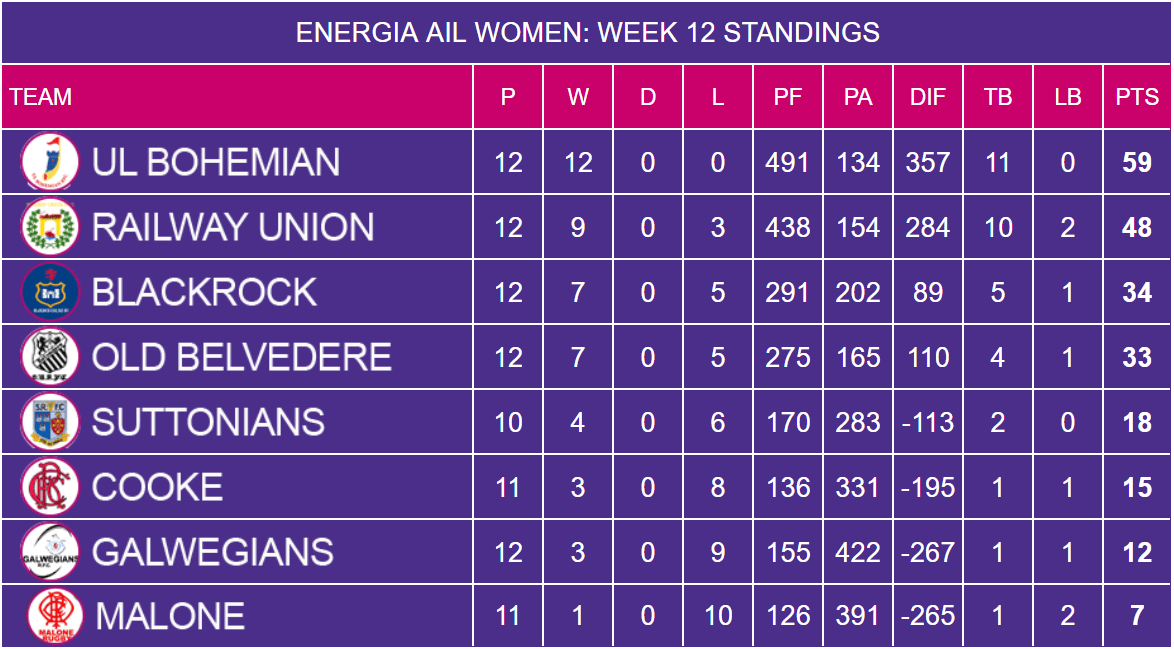 The three matches added another 145 points to the Week 10 and Week 12 totals with UL Bohs accounting for 78% of the points scored. The points came from  24 tries, 11 conversions (46% conversion rate) and 1 penalty.

Bohs players obviously dominate the scorers for the three games with Chloe Pearse leading the way with 20 points from 4 tries. Nicole Fitzgerald is next up with 12 points from 6 conversions followed by Edel Murphy on 11 points from 1 try and 3 conversions.

Pearse moves back to second spot in the leading scorers table, leapfrogging Railway’s Steph Carroll. Nicole Fitzgerald moves up three places to 4th. Jemma Jackson’s penalty for Belvo against Rock sees her hang on to 6th place with Alison Miller dropping out of the top six.

Pearse and her teammate Stephanie Nunan are the main movers at the top of our leading try scorers table with Pearse retaking top spot. Nunan leapfrogs quite a few to join Suttonians Molly Fitzgerald on 8 tries for the season so far. 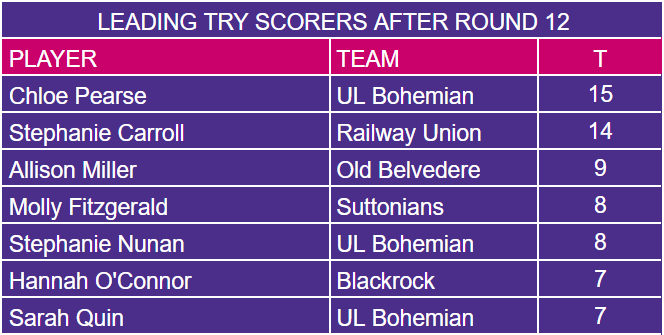 It’s all a still bit messy with Suttonians still two matches behind the rest of the teams and their opponents in those matches, Cooke and Malone, one game behind. However we’ve included a drop down below showing all the scorers for all the teams for all matches played up to 12th March 2020.

We are still waiting nominations from the refix matches at the start of the month. As soon as we get them we’ll update the players player standings.