The Women’s Week  11 activities were wrapped up earlier in the week so this will be a straightforward preview of this weekend’s matches.

The Week 12 fixtures are as follows.

The form of the teams going into this round is a bit messy due to the postponed matches but here it is based on the matches played. 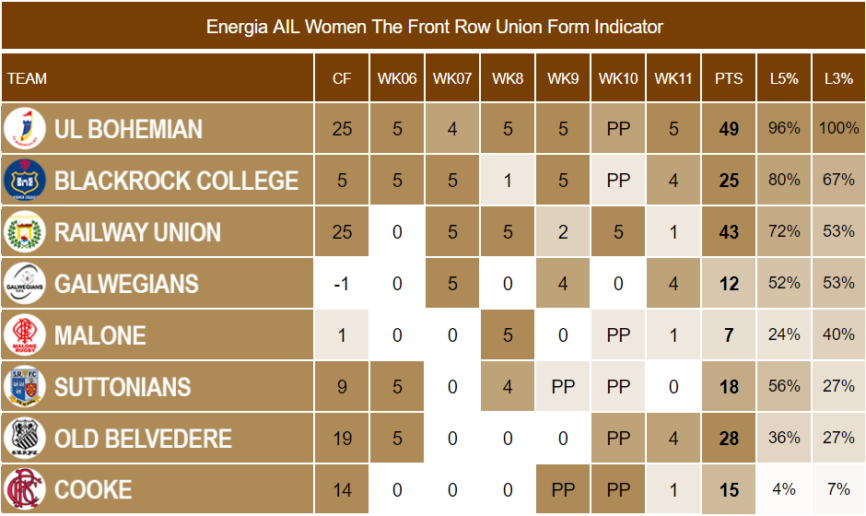 UL Bohemians continue to march on picking up a full match points haul over their last three games. With only four matches to be played (including refix) Bohs will be keen to finish the regular season undefeated.

Galwegians have hit a reasonable run of form of late but their recent wins have come on home soil and they have continued to struggle away from home.

I expect the Bohs machine to pick up a full haul in this one.

Old Belvedere picked up a much needed win last week to halt an unwelcome 3 match losing streak and with their international players likely to be available they will be keen to add another win to consolidate a top four finish.

Suttonians however will fancy their chances as they prepare to go into a period of refix matches which could end with them in the mix with Belvo and Rock for a top four spot. They will realise that this is effectively a double pointer

Hard to predict, but I going to go for Suttonians team ethos to prevail!

Cooke will be glad to get a game at home under their belt after a couple of cancellations at Shaw’s Bridge and they will be keen to start a run of three weekends at home with a win.

However they are up against an inform Blackrock who will be further strengthened by players released from the Ireland set up.

The Cookies will have to dig deep if they are to get anything out of this one but I suspect that Rock will return to Dubin with the win.

Railway have slipped of the boil in recent weeks with only one win in their last three outings but they should be bolstered this weekend with international players returning.

Malone have been steadily improving throughout the season and they will battle hard throughout and will relish the challenge.

However, I suspect that this will be a tough outing for the Belfast side against a team eager to consolidate a top two finish.