The Women’s AIL continues this week. Hopefully we’ll get a full weekend of results with previous weeks disrupted by frost and Storm Dennis.

Only on fixture was fulfilled in Week 10 with Railway Union beating Galwegians 40 – 0. Stephanie Carroll was the star of the show with 4 tries which sees become both the leading scorer and leading try scorer with 65 points from 13 tries.

This leaves the league as follows. 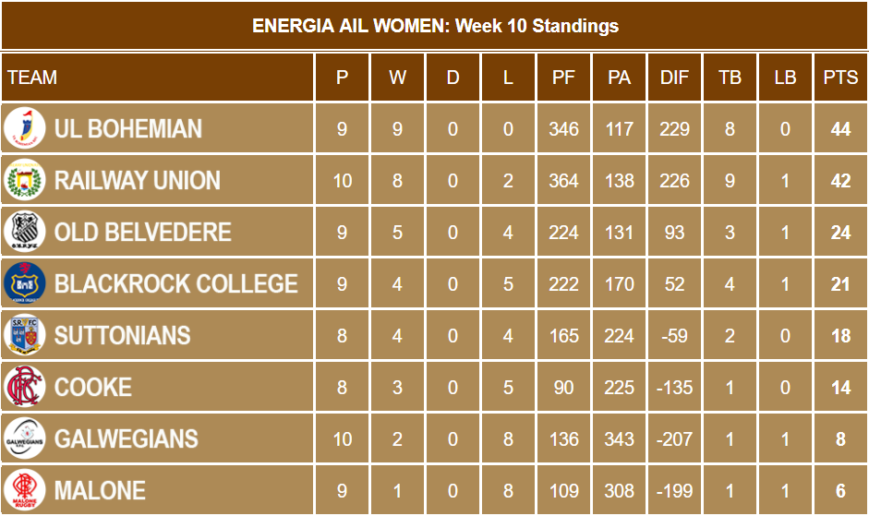 The missed fixtures have made a bit of a mess of our current form table, with the likes of Suttonians and Cooke not having played for quite a few weeks now, but the teams ranked by their last three and five completed games is as follows. 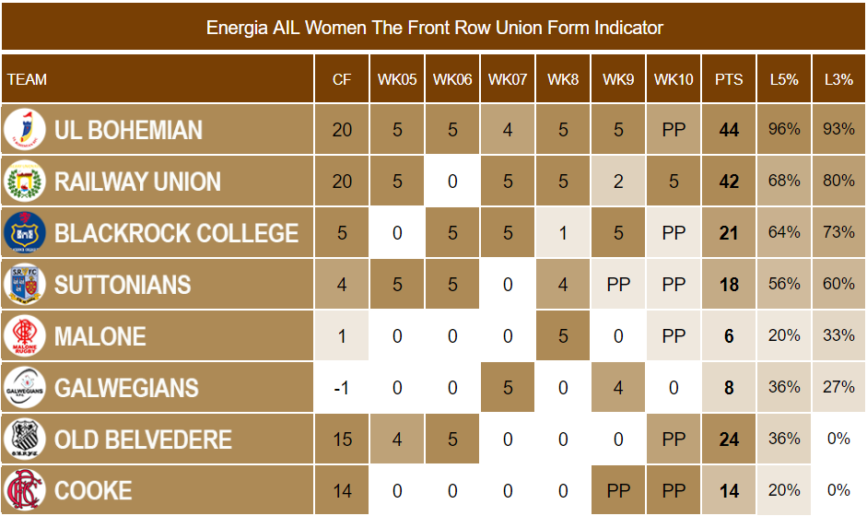 This leaves us with this weekend’s fixtures. galwegians and Cooke kick off early, at 14:30 but the rest kick off at 17:00. Malone and Old Belvedere taking part in a rare double header with their men’s sides at Gibson Park.

The WO awarded to Cooke way back in week 4 were the last points the Belfast side picked up in the league. They  have had a few issues on the field, with availability, and off with a change of coach mid stream.

Galwegians, who have also had their own availability issues have made some progress picking up a couple of wins in the last five games including a notable reversal against Old Belvedere in Week 9. The will be buoyed by the return of the talismanic Denise Redmond who will be available for a few games this season.

Cooke in particular will be looking forward to getting a run out and their enthusiasm might just push them over the line but I expect the home side to win this one.

Blackrock have been showing good form of late with three wins in their last five outings. However they are still trailing Railway Union who picked up an extra bonus point over the same period.

Rock will be missing four players to Ireland duty but they still retain the excellent Hannah O’Connor and her presence, along with the reliable boot of Lisa Mullen could be enough to see them home.

Railway will be missing 8 players but their strength in depth is starting to show and with the inform Steph Carroll on the wing they are always going to be dangerous.

It’ll be an interesting one but I suspect that railway might just steal it.

Somewhat surprisingly Malone go into this game as the form team having won one from their last three, Old Belvo without a win over the same period.

It’s a bit day at Gibson Park, with the men’s sides also meeting, so there should be plenty of support for both sides. However, the state of the pitches, which have suffered considerably in recent weeks may be the deciding factor in this one.

Belvo will be aware of the challenges of Blackrock and Suttonians for a top four finish and I expect thy will see this as a chance to put some space in between them in the battle for the play offs.

It’s been a while since Suttons played but they are showing a good run of form over the last three and five games that they played. However it’s a couple of weeks since they have kicked a ball in anger and Bohs are hardly the team that are going to gently welcome you back to match play!

Boh’s ruthless pack will be keen enough to get out and grind another side into submission, before releasing their backs, and on heavy pitches it’s hard to find a response.

Suttonians, like Cooke, will be glad to get a run out and as an enthusiastic side anyway I can certainly see them causing a few problems However I can’t see Bohs coughing this one up as they continue their undefeated season.