By Editor on February 15, 2020 0 Comments
Cooke will be looking to match last season win against UL Bohemian
CLUB WOMEN ADVERTS

This weekend sees the return of the Women’s AIL. With only eight teams involved we are pretty much hitting the business end of the season with only five more rounds remaining including this one. Suttonians and Cooke still have a postponed fixture to play so they have six.

You can read our full review of the matches played in Week 9 here.

This series of games will be influenced by Ireland Women’s involvement in the Six Nations and the availability of players. So far 26 players have been selected for Ireland with 19 coming from the AIL, details below.

Going into Week 10 the current standings in the league are as follows: 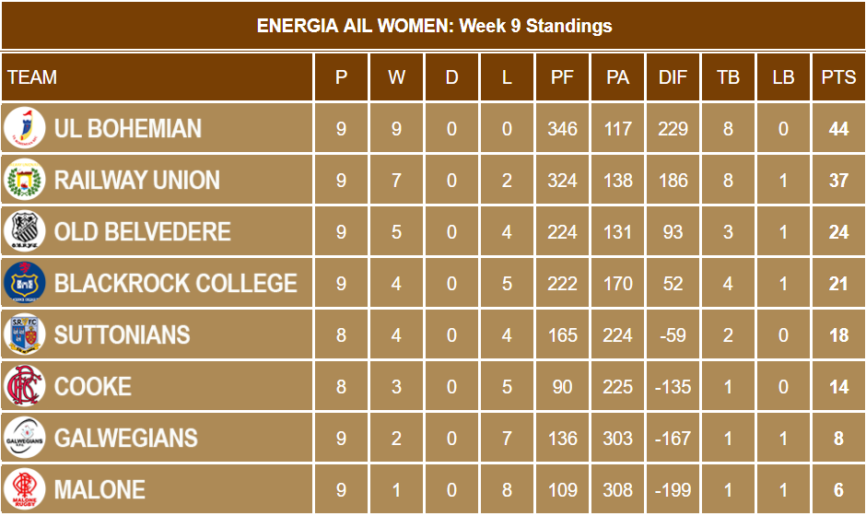 However, looking at the teams on current form the standings based on their last three games are: 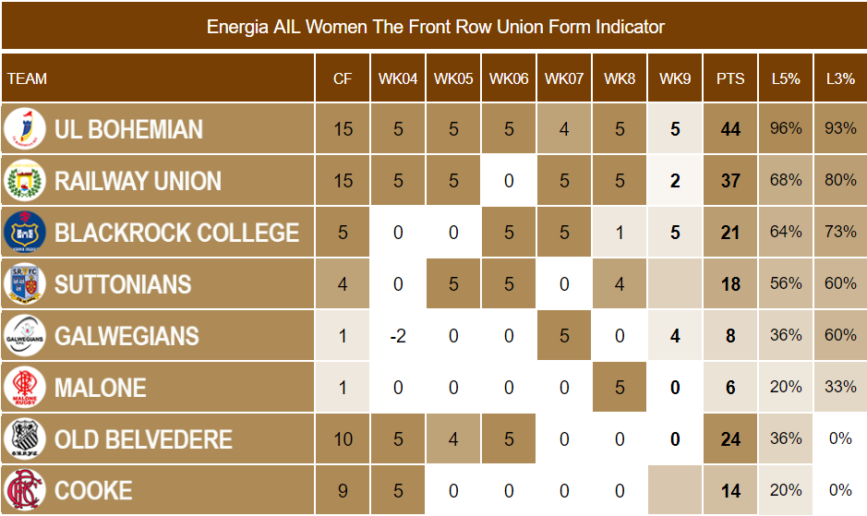 Using the above form table we’ll have a look at this weekends fixtures based on their current form.

The fixtures for Week 10 are:

Cooke are the bottom club in terms of current form having gone four games without a win and it’s difficult to see them improving those stats this weekend as they welcome the undefeated league leaders UL Bohemian to Shaws Bridge on Saturday evening.

Bohs have simply dominated the regular season with nine wins from nine and, despite having four players involved with the Ireland set up, the bulk of their magnificent pack remains intact so it’s hard to see where Cooke are going to get a foothold in this game.

It’s been a difficult season for the Belfast side with variable player availability and a switch of coaches mid stream. I haven’t had a look at their  team list so I’ve no idea what sort of side they are fielding but there is no doubt that they have the players that can cause Boh’s problems, if they are available.

It’ll take a huge game from Cooke if they are to dent Boh’s unbeaten run and I’m expecting a comfortable win for the Mean Red Machine.

Both these sides have been a welcome addition to the AIL this season.

Suttonians are enjoying a pretty good season to date with four wins from the eight matches they have completed and it would be fair to say that Malone have found it a bit more of a struggle.

However, the Red Sox did pick up their first win a couple of rounds ago and they have shown steady progress throughout their season. Coach Grace Davitt seems to have settled on a starting XV which have been building as a unit and while they are missing the out and out pace of Holly Brannigan and the moxie of Neve Jones they still should have plenty to surprise their guests.

Suttonians are just a little further down the line in terms of development and while I still expect a win for the visitors it’ll be interesting to see how much Malone have closed the gap in the intervening weeks.

There are only three points separating these tams in the league but going on current for Blackrock are clear favourites as they make the trip to Ollie Campbell Park to play their Dublin rivals.

The picture being painted by the stats is that of an upwardly mobile Rock chasing down a rapidly descending Belvo but, while the D4 Dutchesses will be unhappy with their current league form, they have been able to turn it on in the Cup, with a CUp final in April already in the bag.

Rock will be buoyed by the availability of Emma Hoban and the talismanic Hannah O’Connor and I’m pleased to see FRU Favourite Liza Mullen step in for Michelle Claffey at our half, to set up an interesting dual with her former Ulster U18 coach Jemma Jackson at Belvo, but I think the key duel will be between Rock’s O’Connor and Belvo’s Jenny Murphy with both playing at eight.

The stats point on Blackrock’s favour and I think they might just edge this one.

Galwegians, who are enjoying a mini revival at present, travel to Dublin with, what I believe is, a young side captained by the experienced Mairead Coyne.

Railway, despite losing seven players to the Ireland squad, can still field three internationals with Clare Boles, Ailsa Hughes and Nikki Caughey all starting and eager to get game time under their belts and Railway’s Ulster contingent is further boosted by Keelin Brady and Amanda McQuade.

Brady takes her place in second row in a pack we’ve maybe undervalued in the past. However, with solid keystones like Lisa Callan and the blossoming Daisy Earles (see what I did there) they will still be a force to be reckoned with.

My reckoning is that this will be a highly entertaining game, as both sides like to play rugby, but Railway should come out on top.