You are at:Home»Competition»All Ireland League 1B»Energia AIL 1B. Week 14 Preview

Will Old Wesley kick on from last weeks win?
All Ireland League 1B

Our mid week re-fixed matches also interfered with our AIL 1B Week 13 Wrap so we’ve included some of that information here in the drop down boxes below.

I’m afraid this league continues to frustrate. From running a 90% hit rate in AIL 1A my AIL 1B predictions are once again shot to hell with Banbridge and Armagh letting me down and Shannon making a mockery of my prediction of a draw with Naas!

There were 219 points scored in Week 13 compared to an average of 185 per week for the season to date. The points came from 31 tries, 20 conversions (65% conversion rate) and 8 penalties.

Ben Daly (Shannon) was this weeks leading scorer with 20 points from 1 try,  6 conversions and 1 penalty in a high scoring weekend for the Limerick side.

Tommy Whittle (Old Belvedere) came second on 11 points from 1 conversion and 3 penalties and there are four players with 10 points from 2 tries each with Shannon duo Eathon Maloney and Pa Ryan, joined by Ben Murphy (Highfield) and Peter Cromie (Banbridge).

Also of note are Old Wesley’s two penalty tries which were their only scores against Armagh!

All this leaves the leading scorers pretty much unchanged with Cormac Fox (2 pts) and Peter Osborne (5 pts) the only two in the top six to score any points this week.

There was a bit more of a shake up in the leading try scorers table with Pa Ryan and Peter Crombie starting to open up a small gap on the chasing pack. 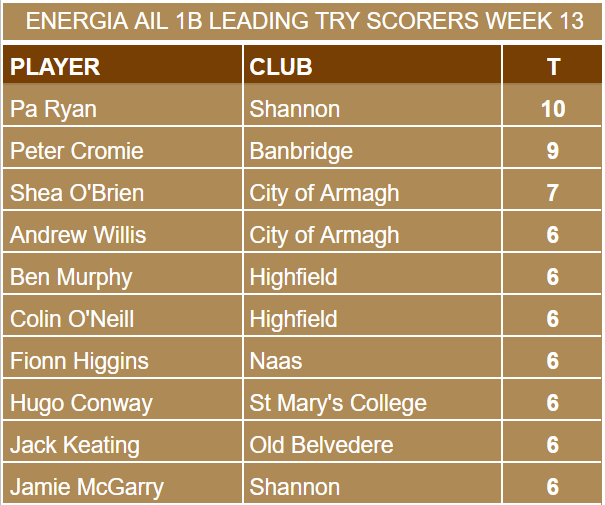 Malone look to be the team that gained the most from the Week 13 with the Belfast boys sneaking into 4th place ahead of Banbridge and Belvo.

Despite getting the win against Armagh, Old Wesley finally relinquish second spot to Shannon whose big points haul against Naas moves them into the top two on points difference. 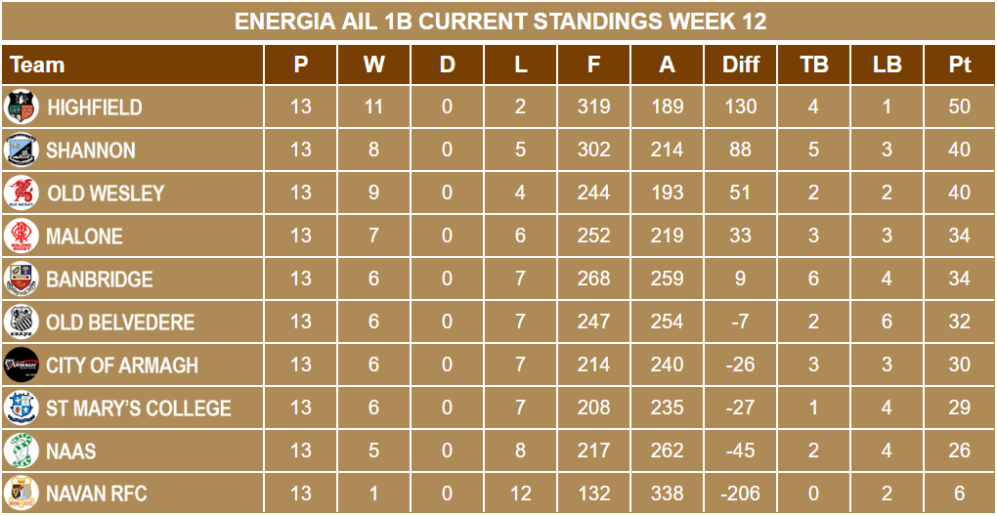 There has also been a touch of repositioning in the current form table with Naas dropping a touch and St Mary’s and Old Wesley rising from previous lows.

The fixtures for this weekend are as follows.

It’s been a tough couple of weeks for Armagh facing the leagues top two teams back to back. It doesn’t get any easier this week as Shannon replace Old Wesley in the top two and the Limerick side are in scintillating form!

However, it’ll be just another match at the Palace Grounds and the only game Armagh will worry about will be their own which they will look to execute to the best of their ability.

Whether that will be enough is another matter as Shannon are the form side, beating Highfield and Old Wesley before last weeks thrashing of, in form, Naas. I suspect that Shannon will be too hot to handle for the hard working Armagh side.

Last weeks defeat for Naas will have been a big blow. Instead of getting in the mix for the mid table dog fight for fourth spot they now find themselves back in the bottom two.

Banbridge will also be disappointed they didn’t consolidate fourth place and even more frustrated that Maone have now inched ahead of them.

Who reacts best to these disappointments will win this one. My feeling is that Naas will have to dig the deepest to get their season back on track and it’s could be a good opportunity for Banbridge to come away with the points.

It looks like an ideal chance for Old Wesley to build on their win last week.

However, despite having four big 0s in their match points pick up over the last four weeks, Navan haven’t been losing those games by all that much and if they can put a bit of pressure on the Old Wesley pack and convert their chances they will be in with a realistic shout.

Unfortunately, for the home side, I’m still going with Wesley who definitely won’t want to continue their slide down the top four at this stage of the season.

Belvo probably finished the game as the stronger side against Malone last week but they started to play a bit late and they were a bit blunt in attack. They might sharpen up a bit with the return of their U20’s players but will it be enough to turn over runaway leaders Highfield?

The top side appear to be back on form, after a mid season wobble, and their tight defence should be strong enough to see off Belvo.

I covered the last meeting, which was played in difficult conditions, and St Mary’s were deserved winners that day.

However, St Mary’s had hit a slump in recent weeks and Malone have actually hit a reasonably sustained run of form, albeit with a couple of blips against local opposition.

Malone are now in the driving seat for a play off place, but they are aware that it’s a tenuous grip with the three sides below them waiting to take advantage of any slip ups. I think Malone have to win this one if they are going to stay in that hunt and I suspect that they will.