Will City of Armagh push on having seen off the challenge of their Ulster rivals?
Club Men

By Editor on February 14, 2020 0 Comments
Will City of Armagh push on having seen off the challenge of their Ulster rivals?
CLUB MEN ADVERTS
PRINTS

I don’t think our AIL 1B predictions have been any more accurate than those for AIL 1A but we will persevere for this season and see if we can put some umph behind the statistics over the summer.

You can find our summary for Week 11 and our latest scorer stats here, the results leaving the league table as follows. 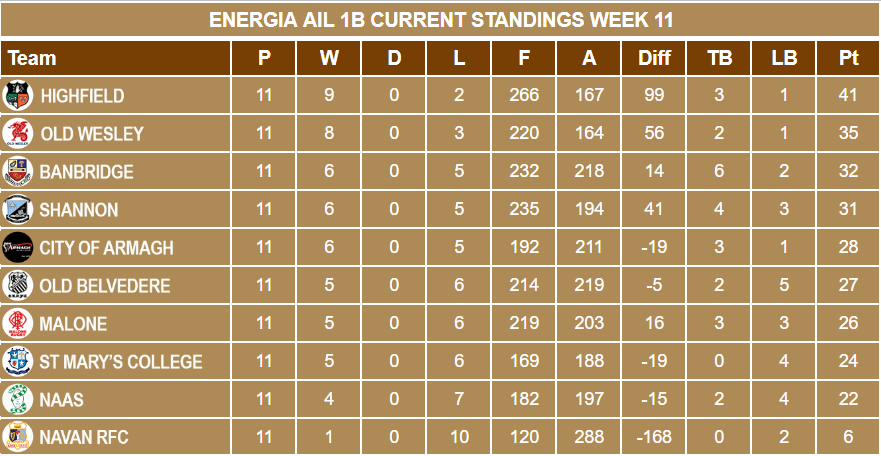 It’s taking a fairly similar shape to last seasons table but will there be a late charge from one of the sides in a similar fashion to Ballynahinch this time last year?

Looking at the form table below Banbridge seemed to be making the break until they stumbled at the end of the back straight going into the corner as Armagh turned them over at the Palace Grounds.

It may be too late for a challenge from Nass, who have to work their way through the back field, but Shannon and City of Armagh join Banbridge on the shoulder of a slowing Old Wesley. Which one will position themselves for a tilt at Highfield when the teams hit the home straight in a few weeks time?

Of course, some of the teams have payers involved with the Ireland U20 Six Nations campaign, but looking at the players used to date it’s likely that only Old Belvedere will be seriously disrupted.

AIL 1B U20 SIX NATIONS INVOLVEMENT

Will this week’s fixtures make it any clearer? Let’s find out.

We’ll find out how serious Naas’ challenge is tonight when they travel to Templeville Road to play St Mary’s College.

The last time they met the win for St Mary’s gave them three wins in a row but they have gone off the boil since then winning only one in the last three.

Naas have won three of the last four, their only loss being a surprise reversal to Navan, and they have two big wins against Belvo to their credit.

Nass have shown impressive form going into this match and they should take the points in this one.

Armagh were in a bit of a slump the last time these two met with the loss to Highfield their third in a row. Since then they have shown impressive form winning three of the last four with an impressive reversal of a big loss to Banbridge and a double over Malone.

Highfield went on to record their first loss the week after their match against Armagh and are in a mini slump with two wins from the last four games having shared the spoils with Shannon and Old Wesley.

You can’t write off Highfield’s impressive season to date. They are the leading scorers, by some margin, and they have the second tightest defence in the league. However, Armagh will be extremely confident after picking up three wins from the local derbies and home advantage, a heavy pitch and a bit of a dogfight might just push them home in this one.

It seems like every week I’m talking about Malone getting their season back on track. They seemed to be going in the right direction with back to back wins over Old Wesley but then Armagh worked them over at Gibson Park and it’s back to step one of putting a run together.  However, a match against a struggling Navan is a good place to kick start their final push.

Navan did record their first win a couple of weeks after their game against Malone and they gave “on form” Banbridge two hard games so they may well be a tougher prospect now than during the last encounter. However,  it would need a huge swing in form to see anything other than a Malone win in this one.

The previous meeting sparked Banbridge’s impressive run of form and sent Belvo into a comparative slump. Will this match see a  reversal of fortune?

It’s a big day at Ollie Campbell Park, with the women’s AIL match against Blackrock following straight after this one, but the stats indicate that it’s unlikely that the men’s side will get proceedings off to a winning start!

Banbridge appear to have learned how to win close games while Belvo have lost a few they mabe shouldn’t have. They will also likely be missing at least two of their three front rowers who are involved with the Ireland U20 set up in match conditions that will favour the dominant pack.

Banbridge will be aware that a win here could move them into second place and current form indicates that they will get it.

This will be a good test of our current form stats given that Old Wesley are on the current worst run in the league, having won only one game since their last meeting, and none in the last three, but they still sit in second place.

Shannon are in fourth place, four points behind, and, with three wins out of four over the same period, they will see this as an opportunity to close the gap.

It’s  dangerous  to completely discount Wesley’s eight game unbeaten run, prior to their current slump, and they will be aware of the teams lining up behind them, but I’ll stick with the stats and predict a narrow win for Shannon.