You are at:Home»Competition»All Ireland League 1A»Energia AIL 1A. Week 14 Preview

Will the referee be pointing in Clontarf's favour this week?
All Ireland League 1A

By Editor on February 28, 2020 0 Comments
Will the referee be pointing in Clontarf's favour this week?
CLUB MEN ADVERTS

With a few schools competition re-fixes this week we didn’t manage to get our AIL 1A Week 13 Wrap published so we’ve included them here as dropdowns if you want to keep up to date on the leading scorers.

I’m afraid it was our friends at Ballymacarn Park that let us down in our predictions. Dublin University’s win moving them out of the bottom two.

The rest of the matches went with our predictions.

Week 13 saw 217 points scored, just above the average for this season of 200 points per round. The points came from 28 tries, 19 conversions (68% conversion rate) and 13 penalties.

Despite only picking up three points from a penalty this week, Clontarf’s Sean Kearns becomes the first AIL 1A player to hit the ton for this season.  Cusack leapfrogs Sean O’Hagan to move into second place.

The leading try scorers looks to be a race between Aaron Cairns and Bryan Hayes with both adding one in Week 13. However, with 9 players just a brace or hat trick behind them this one had a bit to run yet. 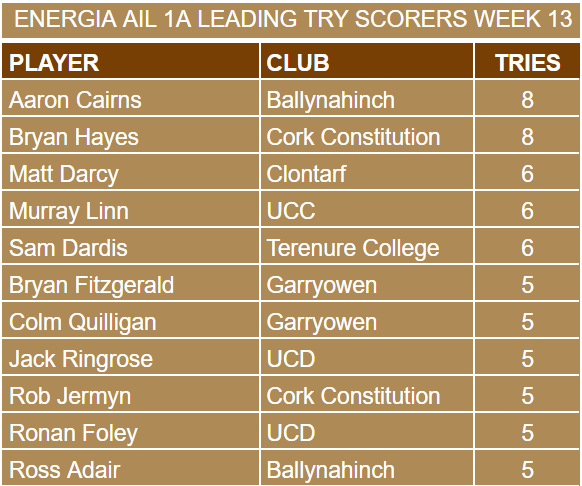 After Week 13 the league table is as follows, the main changes being Young Munster leapfrogging Clontarf and Dubin University slipping ahead of UCC. 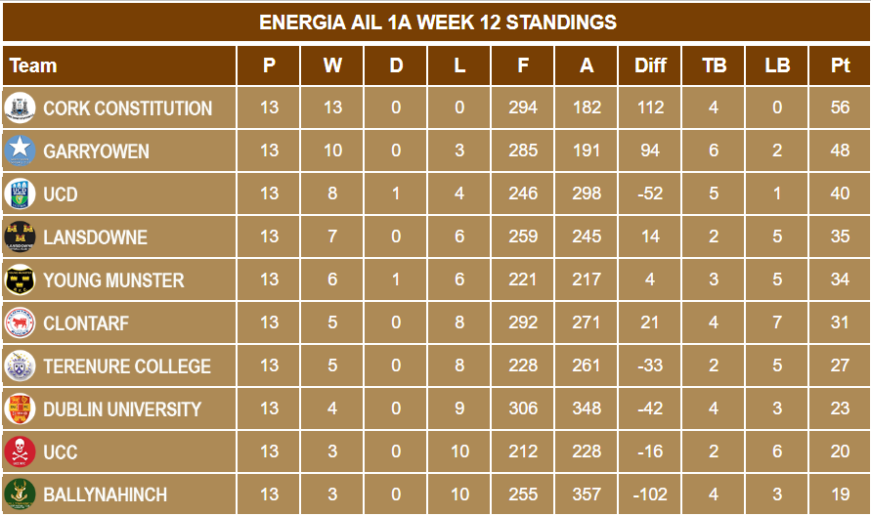 With Hinch’s latest result they are now the poorest performing team, based on the last three games, though UCC’s struggles continue the Cork side now going 10 games without a win. The pressure is starting to build for the match between this pair at the end of March!

At the top of the table, Young Munster join Cork Constitution and Garryowen as the three leading clubs on current form. 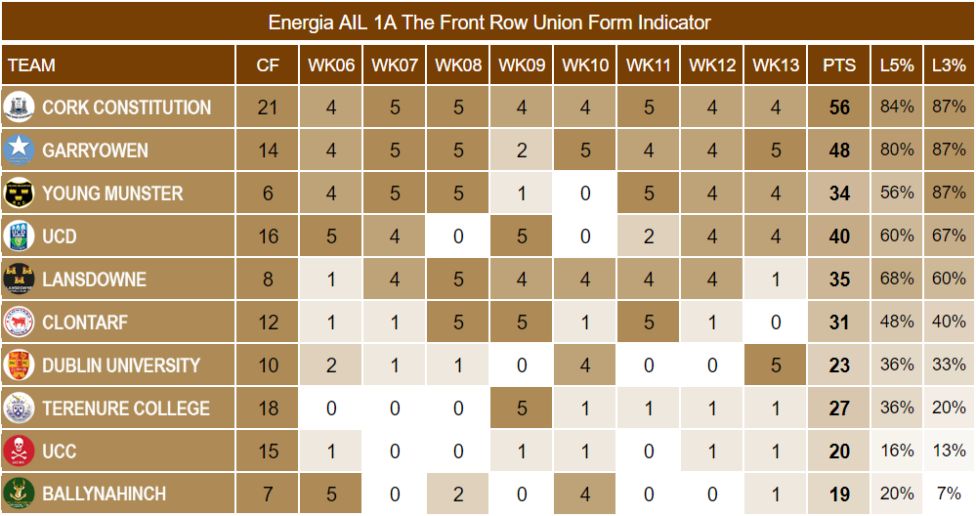 The fixtures for this weekend are as follows.

The Friday night game between these doorstep rivals on the outskirts of Limerick looks to be extremely tasty. Both teams are showing excellent form.

Garryowen currently have the bragging rights by virtue of their narrow win way back in Week 5 but it’s been something of a reversal of fortune for YM since then.

It really is too close to call this one. The longer range stats point towards Garryowen doing the doube this season but we are going to predict that Young Munsters meteoric reversal of fortune will continue to see them through.

While the result looks to be a forgone conclusion this should be another highly entertaining game as the league’s two highest scoring teams meet at College Park.

Unfortunately, for the free scoring students, they have also been waving too many scores through in the wrong direction but they are just the sort of side that could win if Cork Con decide to accept the challenge and open up.

However, from what glimpses I saw of their open play in their storm lashed game against Ballynahinch, Cork Con are more than capable of opening up. They demonstrated a great variety of options in their support runners but can also grind it up the middle if required. Tellingly, they have the best defence in the league.

It’s all pointing against Dublin University but they will likely be welcoming back a plethora of players from the U20’s all basking in the feel good factor of a Triple Crown. Hopefully it will be a high scoring thriller but I suspect that Cork Con will have the experience to close it out at the final whistle.

The stats say a comfortable win for Lansdown at the Aviva on Saturday afternoon but their previous meeting indicates otherwise! At that time Hinch were the worst team on form in the league, as they are now, but Lansdowne were on a bit of a slide.

Lansdowne’s form has somewhat recovered as they went on to win six of their eight games since that meeting whereas Hinch have bumbled along only picking up two more wins as their porous defence continues to let them down.

While it would be foolish to underestimate the size of Hinch’s previous win, it was a long time ago and the Ulster side have shown no consistency since. I’ve a nag at the back of my head that they could produce a big win after a big defeat but I’m going to settle on a convincing win for Lansdowne.

The season took a turn for the worse for both these sides after their last meeting with only Terenure picking up a solitary win in the last 8 outings. Neither side has a win in their last three.

UCC will definitely see this as a chance to get out of the bottom two but Terenure will see it as an opportunity to keep themselves distanced from a bottom of the table dog fight.

Neither side has been losing heavily, they just haven’t been scoring enough, but Terenure should go into the game slightly more relaxed and that will probably be enough to see them through.

Clontarf’s challenge for a top four finish has slipped somewhat in recent weeks with two losses in their last three outings. UCD have picked up two wins and a couple of bonus points in high scoring loss in the same period.

There is a chance that both sides could be welcoming back some U20’s players with Contarf probably the keenest to get their trio involved.

The stats point in favour of UCD but I just think that Clontarf will be battling to avoid three defeats in a row and that extra impetus should be enough to see them over the line.