You are at:Home»Competition»All Ireland League 1A»Energia AIL 1A. Week 12 Wrap.

By Editor on February 19, 2020 0 Comments
Gerard Hurley (Cork Constitution) was on point with the kicking duties at Ballymacarn Park with 11 points
CLUB MEN ADVERTS
PRINTS

All the fixtures were completed in Week 12 of the Energia AIL 1A despite the influence of Storm Denis.

The conditions certainly impacted our featured game at Ballymacarn Park but league leaders Cork Constitution overame the conditions and a battling Ballynahinch to maintain their undefeated season.

The results from the weekend as follows.

It gave us a weekend where we got all our pre match predictions right! 🙄

However, it didn’t have a major effect on the table. Lansdowne and Clontarf swapped places in the top half and UCC’s losing bonus point at UCD lifts them one point clear of Dublin University an Ballynahinch at the bottom of the table. 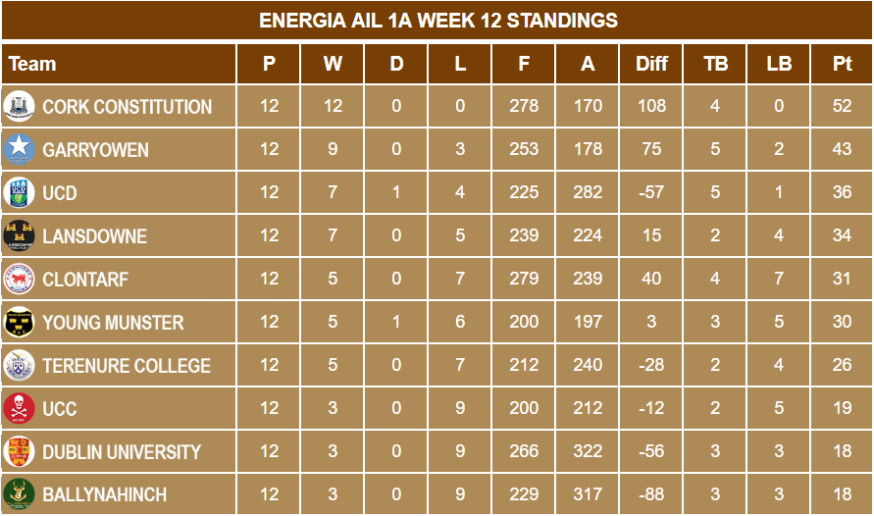 Apologies to Clontarf’s Sean Kearns, we’d missed out a penalty in his points total last time round. This has now been corrected.

Unsurprisingly, given the conditions, it was a low scoring week with 148 points coming from 17 tries, 9 conversions (53% conversion rate), 14 penalties and 1 drop goal – from Garryowen’s Jamie Heuston.

Craig Ronaldson (Lansdowne) made his scoring debut this weekend with 19 points coming from 2 conversions and 5 penalties with Sean Kearns a point behind on 18 from a try, 2 conversions and 3 penalties. Both played in this week’s highest scoring game on Friday night.

Gerard Hurley (Cork Constitution) was on point with the kicking duties at Ballymacarn Park with 11 points  from 1 conversion and 3 penalties and Michael O’Kennedy (Dublin University) scored 9 from 3 penalties in their defeat at Young Munster.

This leaves the leading scorers table as follows. 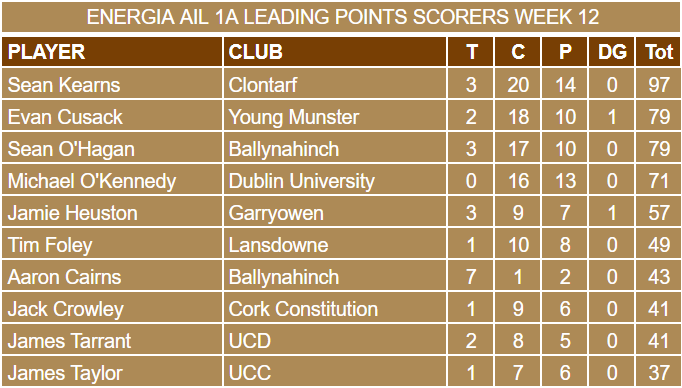 Kearn’s haul sees him put some space between himself and Evan Cusack (Young Munster) and Sean O’Hagan (Ballynahinch) in second place. Michael Kennedy closes the gap slightly in fourth place.

There were no multiple try scorers this week but there is a bit of movement in the leading try scorers table. Bryan Hayes (Cork Constitution) joins Aaron Cairns (Ballynahinch) on 7 tries at the top of the table and Murray Linn moves up to joint second on 6. UCD’s Jack Ringrose joins the chasing pack on 5. 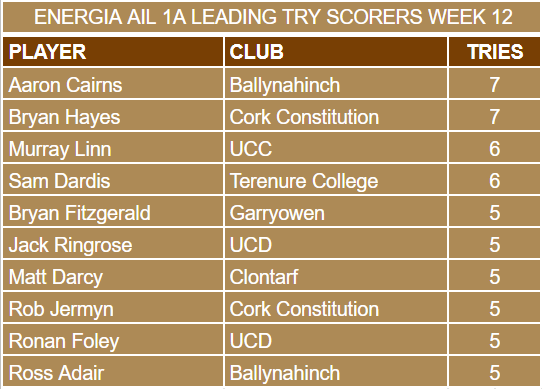 You can view all the Energia AIL 1A scorers, by club, below.