UCD will be looking to complete the double over their Cork rivals.
Club Men

By Editor on February 14, 2020 0 Comments
UCD will be looking to complete the double over their Cork rivals.
CLUB MEN ADVERTS

We are only hitting a 60% prediction rate with our stats which isn’t much better than a 50/% guess percentage but we’ll persevere with this season and have a look at our ratings for next season to see if we can improve.

This weekend sees the season hit the 2/3 completion mark and ideally we would see the teams start to position themselves for the final push. However, with six of the teams having players involved with the U20 Six Nations squad these next few weeks will be all about squad depth.

AIL 1A U20 SIX NATIONS INVOLVEMENT

At this stage of the season there are still two unanswered qustions; “Will anyone beat Cork Constitution?“, and from our Ulster perspective, “Will Ballynahinch stay up?“

There is only the possibility of one of those questions being answered this week, though if Cork Con’s unbeaten run does end it will be a big boost to Ballynahinch’s chances of staying up.

You can view our wrap of the previous round here, and below is the current standings in AIL 1A. 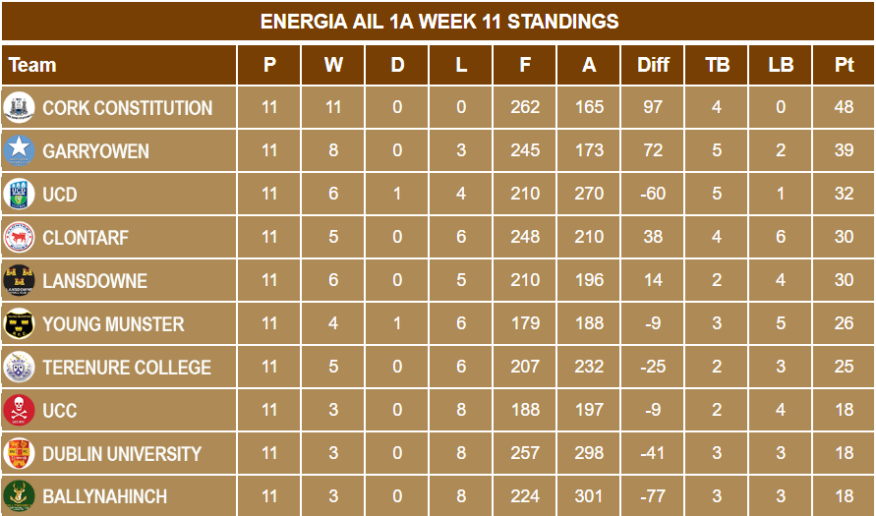 However, we are basing our predictions on the current form so let’s see how the teams have been performing in recent weeks. 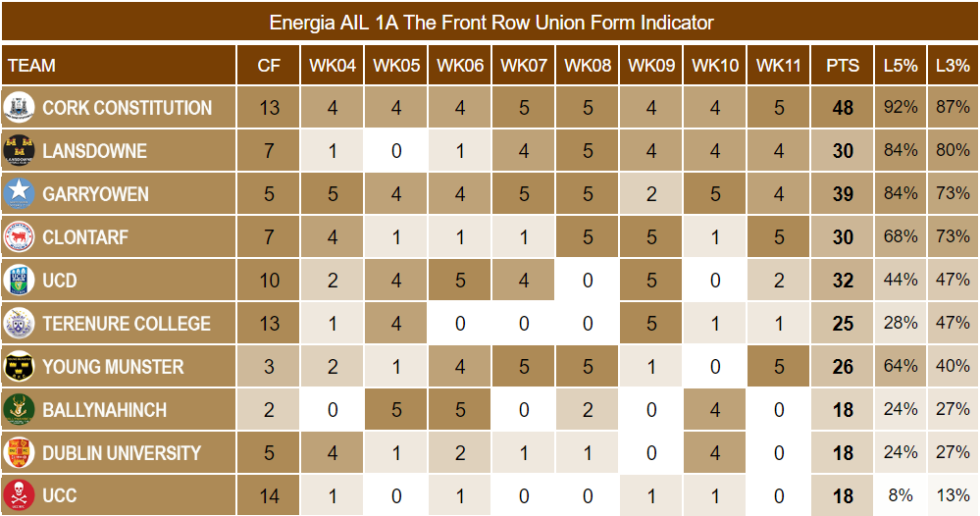 Last time these teams met, in Week 7, Lansdowne won 19 – 23 at Clontarf. That win was the start of a five match winning run for Lansdowne who are currently the second placed team on form.

Clontarf are equal on points in the league standings and have had a useful run since that defeat, winning 3 from the next four, and they are the fourth place team on recent form. However, they have four players involved with the U20 Six Nations squad, compared to Lansdowne’s two.

It’s looking like a narrow win for Lansdowne tonight in a low scoring game in difficult conditions.

Ballynahinch will be hoping home advantage, gales and heavy rain all come into play tomorrow afternoon at Ballymacarn Park as they welcome the runaway league leaders Cork Constitution.

The Ulster side have only won one game since their last meeting and, as I’ve said a few times this season it’s their defence that has been letting them down. Scoring hasn’t been a problem, Sean O’Hagan is the leagues leading points scorer and Aaron Cairns is on a fine run of form as the league’s leading try scorer, they have just been letting too many in the other end.

I suspect Cork Con will be missing out half Jack Crowley, who has become the Ireland U20’s talisman in recent weeks, but you would still expect them to make the long journey home with the points in the bag. They have the highest points for in the league and the second lowest points against and the second largest spread of player’s (23) scoring points.

Hinch will need to scrap for every inch in defence and hope that O’Hagan and Cairns will maximize their scoring opportunities if they are to get anything out of this one.

Dublin University have been having a similar season to Hinch, scoring a lot of point but conceding far to many. Despite sitting second from the bottom of the table, they are the leagues second highest points scorers and you have to think this will be enough to pull them clear of relegation on try bonus points alone.

However, this may be one of those matches that they come away with nothing as they will likely be missing their four players involved with the U20’s, prop Tom Clarkson a major loss in this regard.

The last time they met, Young Munster were in the middle of their mini revival, that saw them soar from the bottom of the table to the relative comfort of mid table obscurity, and they would enjoy working over the students for the second time this season to leave themselves a final run in comparatively free of relegation worries.

Despite both sides only winning one in their last three Young Muster have continued to pick up the extra points here and there and I expect they will be able to close out the students and take the win in a low scoring game.

Garryowen are on a fine run at present having only dropped four match points from a possible 25 over their last five games, their only defeat in that period being a one point defeat to UCD.

Terenure have only picked up 7 points in the same period, their one win in the last five being a five pointer against  Dublin University. It’s a slump that leaves them just hovering above the bottom three.

I’m not seeing anything to reverse the fortunes of either side in this one and expect Garryowen to pick up the home win.

There is not a lot pointing in favour of the Cork students, who have now gone eight games without a win and have been pretty much in free fall since Week 4.

Mind you, UCD have only picked up one win since their last meeting so they are not in outstanding form themselves despite their 3rd place league standing.

While Cork haven’t been scoring a lot, they don’t have the worst defensive record and have conceded 73 points less than UCD over the first eleven games.  If UCC can work with the conditions to nullify the UCD attack they might have a chance but we’re still tipping the Dublin side.